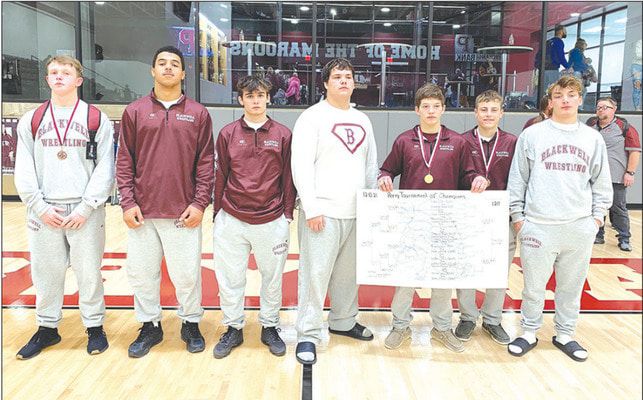 The Blackwell Maroons wrestling team traveled down Interstate 35 on December 10-11 for the Annual Tournament of Champions.

Blackwell would finish in fourth place in the team standings behind three Class 6A schools with 115 points. Choctaw won the tournament with 208.5 points and Kay County rival Ponca City was in third place with 165 points.

Tournament host Perry finished in 15th place out of 19 teams as they entered only seven wrestlers. Aidan O’Dell brought home the only championship from the tournament going 5-0 on the weekend. O’Dell would beat Ponca City’s Cameron Kiser in the second round and then would beat wrestlers from Choctaw and Owasso before pinning Zeke Wheeler of Owasso in the finals at the 3:48 mark.

Freshman Kruz Goff would finish in second place going 4-1 on the weekend. Goff won three of his first four matches by fall to advance to the finals. In the finals Zeke Coleman of Choctaw pinned the freshman grappler in 1:17 to win the title.

Louden Wolfe finished in third place going 4-1 on the weekend. Wolfe started with a fall and a tech fall in the first two rounds before losing his semi-final match to Zane Donley of Vinita on a fall at the 4:46 mark. Wolfe would win his third-place match in a 6-2 decision over Hayden Wright of Yukon.

Kaiden Ailey and Jason Osgood finished in fourth place at their respective weight classes. Ailey (132 pounds) would go 3-2 on the weekend winning his first two matches before losing in the semi-finals and then won a match in the consolation round before dropping a 5-0 decision in the third place match.

Christian Mora (170 pounds) and JD McCleary (285 pounds) would finish in sixth place in their weight classes. Mora went 2-3 on the weekend after winning his first two matches would lose three decisions in the semifinals and the consolation round to finish in sixth place. McCleary would go 1-3 on the weekend winning his first match on a tiebreaker but then lose his final three matches.

Ponca City got a first place finishes from Christopher Kiser (106 pounds), and Ryker Agee (138 pounds) to lead their efforts to a third place finish. Before the Maroon traveled to Perry, they had a dual meet with Ponca City on December 7 in Blackwell.

The Maroons would fall behind early and drop a 36-30 decision to their Kay County rivals. Each team would win seven matches, but Ponca City would pick up bonus points in five of their seven wins and Blackwell also forfeited a weight that would turn out to be the difference in the match.

The Maroons were in action last night against Tonkawa and host Pawhuska Thursday night before going to a tournament in Cleveland this weekend.

The Marrons travel to Perry on January 4th for their first dual meet of 2022 before the always tough Cushing Tournament on Jan. 7-8.