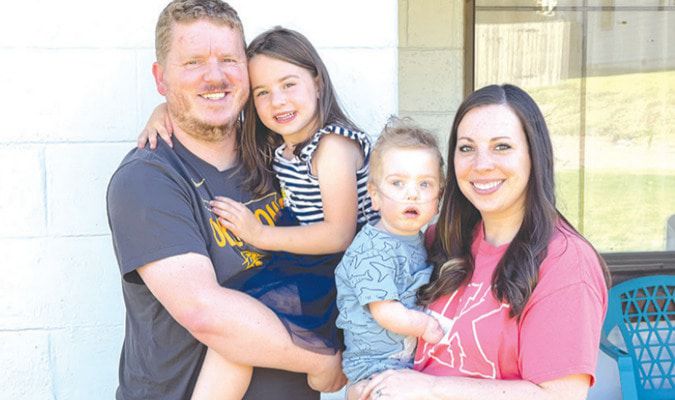 He spent much of the first two years of his life in a hospital. But for the last two months, he and his family have celebrated his return home.

In October, hospital workers and Casen’s family paraded him through the medical facility as he was released. And on Saturday, he spent Christmas with his family – the first time he’s been able to enjoy the holiday. “It’s been mostly an uphill battle,” said his mother, Kari Ann Hazlewood.

“It makes the good times sweeter.” Weighing barley more than one pound at birth, Casen came into the world May 6, 2019, but he didn’t come out of the hospital’s neonatal intensive care unit for the first 154 days of his life. Kari Ann Hazlewood – formerly Kari Ann Wood of Blackwell – gave birth to Casen and his twin brother, Hudson, at only 26 weeks’ gestation.

The two boys were diagnosed with twin to-twin transfusion syndrome, a disorder in which one baby receives more blood and nutrients than the other. Doctors also discovered that Casen had a selective intrauterine growth restriction, meaning he had only 30% of the placenta.

Doctors referred to Hudson as the “dominant” twin, meaning he received more nutrients and blood than Casen. But even though Casen was smaller and in poorer health than Hudson, Hudson unexpectedly contracted an infection 12 days after birth and died. Casen came down with the same infection.

“He’s been fighting from Day One, before they were even born,” Kari Ann said. Casen’s family took him home for the first time in October 2019. But after only six days at home, he was rushed back to the hospital because he was struggling to breathe. He’s had to get medical attention several times since because his lungs aren’t fully developed.

Even a mild cold or low-grade fever can be serious. As soon as he appears ill, he and his family return to the hospital. “It’s terrifying when he’s sick,” Kari Ann said. “There were days in this last hospital stay that were pretty touch-and-go. Obviously, his twin brother didn’t make it through some of those days. Seeing that, and having flashbacks of Hudson, is pretty scary.”

Casen’s health has kept him from doing what many other 2-year-olds get to do. He’s been confined to a hospital bed for months, and he hasn’t yet learned to walk. He also has a paralyzed vocal cord that keeps him from speaking.

But somehow, someway, he keeps a smile on his face, said his father, Donnie Hazlewood. Casen gets joy from watching his 5-year-old sister, Brynlee, play at the park, even though he can’t race down the slide himself. When the children’s show “Bubble Guppies” flashes across the television screen, he’s filled with excitement.

And he’s enamored with moving objects, including cars and wheelchairs. “He’s missed out on some of those things,” Donnie said. “Partly that’s just because he’s in the hospital and some of the delays. But then, when he does experience some of those things … it’s really awesome.

“It’s surprising – in spite of all that – how happy of a little kid he is. He seems to really enjoy life.” Despite setbacks, Casen continues to achieve new milestones in his development, Kari Ann said. He’s able to climb up on furniture. His family jokes that he even knows how to get into trouble.

A few days ago, he clapped for the first time. His family nearly cried. “There’ve been several days … we just don’t know when he’ll catch up, how long it’s going to take,” Kari Ann said.

“Then we see him clapping or cruising along the couch or something. We’ve got to give him his own time, and he’s going to get there.”

HELPING HANDS Without the selflessness of friends, family members and hospital workers, the Hazlewoods say Casen’s journey would have been nearly impossible. Their fellow Ponca Citians have taken care of their home and their dog while the family is in Oklahoma City. Their family members – including Kari Ann’s parents, Don and Cathy Wood of Blackwell – have supported them emotionally. And Integris staffers have treated Casen not like a patient, but rather like their own child, the family says.

“They have basically saved Casen’s life more times than we can count,” Donnie said. “It’s not just like a hospital-patient relationship, either.

They have become the most close and dear people in our life. “It’s pretty unique, the love they have for Casen. You can see it.” Though testing and trying to some, Casen’s long hospitals stays may have been inspirational to others. Brynlee keeps a watchful eye on her brother when he’s home, and now she says she wants to become a nurse, Kari Ann said. If she does, she won’t be the first one in the family. Kari Ann is trained as a pediatric nurse, and her education helped the family understand the medical procedures Casen underwent.

Doctors predict Casen’s lungs will continue to develop, and he’ll eventually outgrow many of his health issues. That prognosis was cause for exuberance when Casen was released from the hospital Oct. 15.

Nurses and medical workers cheered wildly and filled the air with bubbles as Casen and his sister rode in a toy car down a hospital hallway. Plenty more doctors’ visits are in store for Casen. But the family has faith that his future – and their future – is bright. When the family celebrated Christmas on Saturday, not all of their gifts were wrapped up under the tree.

Each step forward that Casen makes in his journey to recovery is a gift – and so is the hope that his first physical steps will come soon, they say. “I think it gives us a new appreciation for our kids,” Kari Ann said. “It’s one thing when Brynlee took her first steps or said her first words. I can’t imagine how I’ll react when Casen does those things.”