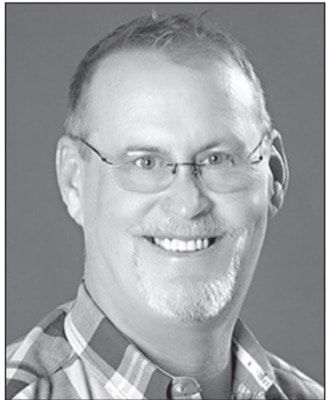 Mike was born on January 2, 1959 to Lance and Sally (Ebright) Morrill as the Blackwell New Year Baby growing up on the now 5th generation Morrill Homestead settled in the Landrun of 1893. Mike attended Union Rural School finishing his education at Blackwell High School proudly graduating in the class of 1977.

Mike was the self-described class clown, maker of mischief and friend to all; enjoyed attending class reunions and reminiscing with his classmates; with a rousing rendition of Puff the Magic Dragon. Mike attended NOC Tonkawa immediately following high school to find majoring in snooker, socializing and supporting the local bands didn’t fare well for class work. Mike then joined his father Lance at Shebester-Bechtel working his way up in the organization.

Mike later sustained a life altering back injury selflessly saving the life of his co-worker.

During his recovery Mike later graduated from NOC Tonkawa with his Associates in Social Science, and was 6 hours shy of his elementary education degree from Northwestern in Alva before returning to the oilfield.

On December 29, 2007 Mike married his best friend and soul mate Christina at Perry FCC. Mike and Christina celebrated fourteen wonderful years together when Mike departed this world on December 29, 2021 to enter the gates of heaven free of pain into the arms of Jesus.

Mike finished his career at Equal Energy US, Inc. in Carney and Chandler, OK as Production Superintendent. Community service was a priority coaching multiple Blackwell sports, served on youth boards, served fifteen years on the Blackwell School Board, API, numerous church boards and served Perry City Council for seven years. Mike was quick witted, funny, kind, soft-hearted having his own language combining words called Mikeyism’s known to those close to him.

He always joked that he was the 1% if a side effect could happen; bizarre reaction to medications, food and especially latex he would get it. Mike adored his five children, eight grandchildren, four great grandchildren, two nieces, two nephews, one great nephew and four great nieces; along with many youth baseball, football and basketball players, wrestlers, teenagers, co-workers and anyone he took under his wing.

He was called Dad, Pops, Mikey, Grandpa, PaPa and Big Mike by many that loved and respected him. He always made those he spent time with feel as if they were the most important person in the world.

Mike was preceded in death by his parents, twin Lance Richard at birth, Marty Wayne, Grandparents, and many close friends.

Mike’s favorite movie was It’s A Wonderful Life; in the movie Clarence the angel tells George, “Strange, isn’t it? Each man’s life touches so many other lives. When he isn’t around he leaves an awful hole.”

Mike was the epitome of what we should all aspire to be as a friend. Remember every time you hear a bell ring Mikey got his wings. Arrangements are under the direction of Trout Funeral Home of Perry, 1408 N 7th St, Perry, OK 73077.