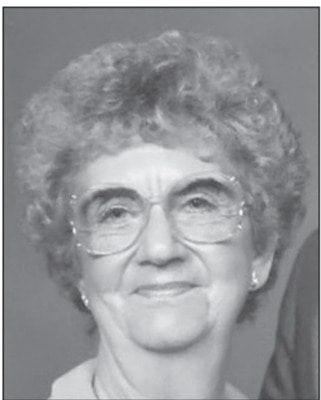 She grew up in Blackwell and graduated from Blackwell High School in 1946. Following her education she moved to Fairview, Oklahoma, to work for the State of Oklahoma. While there, she met Jerry Reames and they were married on August 28, 1948 in Blackwell and they settled in Fairview.

In 1951 they moved to Blackwell where Lea served her family as a homemaker. In 1959 she began working for the Blackwell Chamber of Commerce and eventually served the organization as manager, retiring after thirty-three years in 1994.

The only thing she loved more than Blackwell was family and friends. Following retirement, they owned the R and W Apartments and The Tree House with Garry and Kathryn Whitman.

Her husband preceded her in death on August 8, 2010, and she continued to make Blackwell her home. She was a long-time member of the First United Methodist Church and the V.F.W. Ladies Auxiliary. She served on several boards including the Blackwell Hospital Board, Kay County Fair Board, Top of Oklahoma Historical Museum Board and the Kittie Huston Board.

She loved working the fair, and that the midway was named after her. One of her favorites was the Blackwell Campout, where thousands of campers came to town every year. She is survived by a daughter, Diana McKinnis and husband Danny of Ponca City; a son, John Reames of Blackwell; a daughter-in-law, Lisa Reames and spouse DeWayne Chambers; her special extended family, The Hacketts and Daryl Schmidt; seven grandchildren; and eleven great grandchildren.

A memorial has been established in her honor with the Top of Oklahoma Historical Museum in c/o Roberts and Son Funeral Home, 120 W. Padon, Blackwell, Oklahoma 74631. On-line condolences can be made at www.robertsandsonfh.com