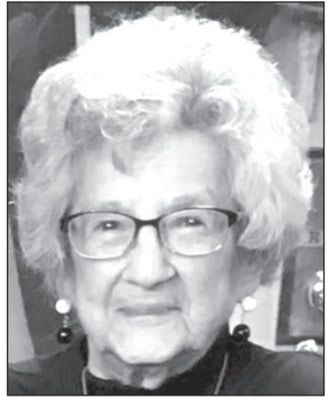 Berniece (Markland) VanSchuyver, 99 of Arkansas City died Monday, December 27, 2021 at the Presbyterian Manor. Funeral services are scheduled for 1:00 p.m., Monday, January 3, 2022 at the Rindt-Erdman Funeral Home in Arkansas City. Interment will follow in the Blackwell Cemetery.

The couple owned and operated Markland Hardware in Blackwell for 45 years. She was a member of the First Presbyterian Church in Blackwell. Berniece is survived by her children, Marilyn McDonell and Tom of Edmond, Ken Markland and Jeanne of Inola, OK, Barbara Miller and Ken of Arkansas City; sister, Bette Dacus of Tulsa, OK; grandchildren, Brian McDonell (Rebecca), Kevin McDonell (Amy), Kent Miller (Kiley) and Amanda Smith (Michael) and 16 great grandchildren.

A memorial has been established with the Presbyterian Manor Good Samaritan Fund. Contributions may be made through the funeral home. Rindt-Erdman Funeral Home and Crematory is in charge of the arrangements. On line condolences may be made at www.rindt-erdman.com