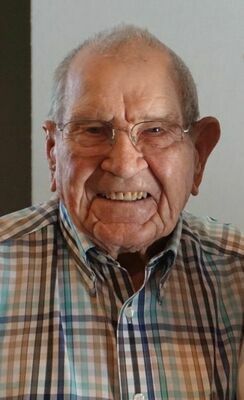 A Celebration of Life service for Randall L. “Randy” Campbell age 97 of Lamont will be 10:00 am Monday, January 10, 2022 in the Lamont United Methodist Church with Rev. Davidson Fields officiating. Burial will follow in the Lamont Cemetery under the direction of Ladusau-Evans Funeral Home.

Randy was born September 2, 1924 in Raton, NM to Wilbur and Mae (Bacon) Campbell and passed away Wednesday, January 5, 2022 in St. Mary’s Hospital. He was raised Southwest of Salt Fork where he attended a country school and later graduated from Hunter High School in 1943. He entered into the U. S. Army on September 29, 1943 and served during WW II in the South Pacific on the Island of Peleliu and was honorably discharged on February 15, 1946.

Randy came back and married the love of his life Jennie Hisey on April 21, 1944 and she passed away November 26, 2008. He was a lifetime member of Lamont United Methodist Church. Randy had a passion for farming and ranching. He was known as the kindest, gracious, most humble individual. Randy was also known for his homemade bread, oatmeal raisin cookies, and peanut brittle.

He was preceded in death by his parents, two brothers Kendall and Dale, and sister Edna Jenkins.
Memorials may be made to Lamont United Methodist Church with Ladusau-Evans Funeral Home serving as custodians of the funds.

Condolences may be made online and the service may be viewed online at www.ladusauevans.com.