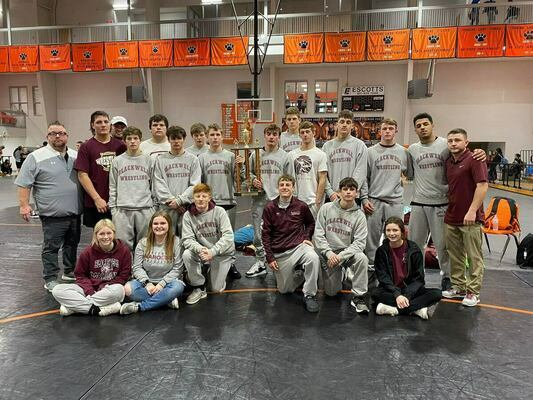 The Blackwell High School wrestling team won their second tournament of the year when they won the Cushing Tiger Invitational last weekend.

The tournament had 30 teams from Oklahoma and Texas entered.

The Maroons beat out tournament host Cushing and Guthrie for the top spot. Freshman Kruz Goff led the way with the lone individual championship at 195 pounds. Goff decisioned Coal Madison of Guthrie 5-4 in the championship match.

Madison is a two time state placer in Class 5A. Goff started his weekend beating Spade Pool of Guthrie 5-1 in the second round. Lasharo Wildcat of Pawhuska was next up in the quarterfinals and Goff pinned him at the 4:58 mark. In the semi-finals, Goff had to go the distance against Trey Hudgens of Sallisaw, winning 11-4. Goff and Madison will get a rematch tomorrow night in Guthrie at the dual meet. Aiden O’Dell (120 pounds) and Christian Mora (182 pounds) chipped in with 45 team points with their second place finishes. O’Dell (17- 1) lost to Eli Kirk (14-1) of Guthrie in the finals on a 6-0 decision. O’Dell would finish the weekend 4-1.

O’Dell started his weekend run with a 16-1 tech fall over Jackson Moore of Bristow.

A 58-second fall in the second round sent O’Dell into the quarterfinals against Case Carlisle of Catoosa that netted a 6-2 decision. Aidan O`Dell (17-1) placed 2nd and scored 25.5 team points. In the semi-finals, it took 1:53 for O’Dell to dispatch Daniel Hernandez of Cushing to get into the finals. Mora (16-5) would go 3-1 in Cushing for his second place finish. Mora started in the second round with a fall in a minute. In the quarterfinals, Mora bested Riley Matheson of Cushing 6-2 and then in the semifinals bested Tyler Smith of Lucas Lovejoy High School in Texas 5-2 to get to the finals.

A hard fought 2-0 decision went the way of Johnathon Roberts (Oklahoma Christian School) for the championship. Jason Osgood and Lounden Wolfe both had solid weekends with third place finishes. Osgood (152 pounds) would have to go the hard way as he lost in the second round on a fall to Braden Dougherty of Chickasha in 1:34. Osgood would fight his way back through the consolation round and win four more matches. In that run Osgood got falls in 2:54, 4:47, and 33-seconds to get to the third place match.

It would take a little longer, but Osgood would pin Logan Sterling of Wagoner at the 5:02 mark to complete the comeback and get third place.

Wolfe was in a loaded 106 pound field that he would go 5-1 on the weekend. Wolfe started with a major decision and then a 1:10 fall in the second round. In the quarterfinals it took a 2-1 sudden victory overtime win to get to the semi-finals over Cory Brown of Wagoner. Hunter Jackson of Elgin would edge Wolfe 4-3 in the semifinals to force Wolfe into the consolation round.

Wolfe got a major decision and would then beat Brown foe the second time in the tournament for the third place finish. Kolby Looper (220 pounds) and Kaiden Ailey would finish in fourth place in their respective weight divisions. Looper (14-6) would go 3-2 on the weekend.

Looper got to the semi-finals with a 1:39 fall and a 3-1 decision. Looper would then run into Hayden Simpson of Guthrie in the semi-finals and the match was over in 15-seconds. Looper would bounce back in the consolation round with a 5-3 decision but would then lose to Randy Nix of Bridge Creek 5-3 in the third place match. Looper had beat Nix 3-1 on Friday in the quarterfinal round. Ailey (13-4) would also go 3-2 over the weekend for his fourth place finish.

Ailey would start with a fall and a tech fall to get to the semi-finals. Jayce Caviness of Stillwell would win an 8-2 decision to push Ailey into the consolation round. Ailey would beat Adarren Brueil of Grove 14-3 before losing to Corban Zugelder of Catoosa 6-2 to end his tournament run.

J.D. McCleary (285 pounds) and Jaxson Brown (106 pounds) would wrapup the placers for the maroons with sixth place finishes. McCleary would start strong with a fall and a decision to get to the quarterfinals.

After that it was downhill as McCleary lost three in a row to Class 5A wrestlers by falls in 25-seconds, 2:05 and 39-seconds. Brown (2-3) would also win his first two matches with a fall and a decision. Johnny Leverich of Cushing would win the semi-final match-up with a 50-second pin.

Jaiden Freeman and Lawson Lusk each went 1-2 on the weekend, getting eliminated early in the tournament. Oscar Liatrache (170 pounds) went 2-2 on the weekend but did not place in the top six.

Both of his wins were by falls. The Maroons also beat Perry 48-24 on Jan. 4 in a dual meet but individual results were not available at press time. The Maroons (4-1) travel to Guthrie (3-1) tomorrow night for a dual meet in a battle of ranked schools in their respective classes. Blackwell has won the last two years 45-22 and 45-27. Junior High starts at 6 p.m. and varsity around 7 p.m.

Maroons battle as O'Dell wrestles gold from Per...