Burn ban in effect as Oklahoma plagued with drought 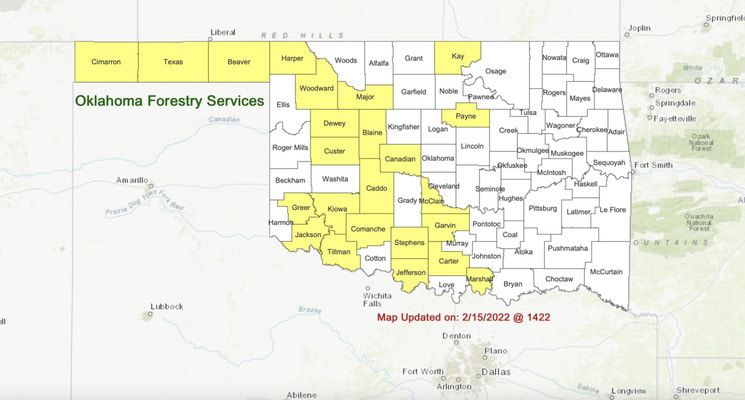 Kay County remains under a burn ban put in place amid worsening drought conditions across the Midwest.

The Kay County Board of Commissioners passed a 14-day burn ban on Feb. 14, joining several other counties across Oklahoma with bans in place. Unless renewed, the order will expire Monday.

No neighboring counties had burn bans in place as of press time, according to the Oklahoma Forestry Services agency.

Several Kay County fire chiefs requested the order, saying in a letter to county commissioners that they believe any outdoor fire in the near future “could become out of hand and overtax the county fire resources.”

Any violation of the burn ban is punishable by a fine of up to $500, imprisonment for one year or both, officials said.

Fueled by persistent drought, wildfires have been reported across the area, state and region in the last seven days.

The westernmost part of the Panhandle is in extreme drought, the highest level.

The Oklahoma Mesonet, a series of weather-monitoring stations across the Sooner State, reported that many of its sites recorded little or no rain in January.

“The February drought outlook from the Climate Prediction Center does not hold much hope for improvement, save for far southeastern Oklahoma where some relief is noted,
Mesonet officials said Feb. 1. “February is the second driest calendar month for Oklahoma, therefore above normal precipitation would be necessary to impact drought conditions.”

Wintry weather that was expected in the Oklahoma City metro on Tuesday was not expected to bring precipitation to parts of northern Oklahoma.

The National Weather Service in Norman reported Monday that northern Oklahoma could have some slight chances of wintry mixes and precipitation through Thursday, though the amount of precipitation, if any, would be nominal.