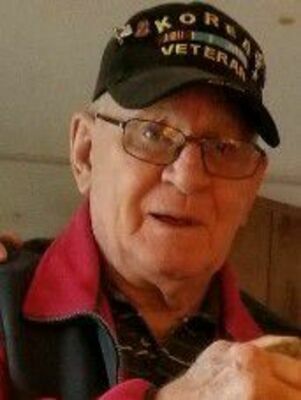 Gene Scott was born on April 29, 1936, in Quanah, Texas, to Ernest Eugene and Hattie Blanche (Cork) Scott. He grew up in west Texas and attended school in Tell, Texas. He was baptized in the Tell Baptist Church.

He furthered his education when he entered the United States Army on March 8, 1955, serving during the Korean War.  He was honorable discharged on March 7, 1963. While serving in the military he married Charlene Kay Ricketts on May 10, 1958, in Wichita, Kansas. He worked at the Blackwell Zinc Company and Acme Foundry before starting his own trucking company, Scott Trucking.

He later worked for the CFM Corporation and Shepherd Oil Company in Blackwell. He was a member of the Veterans of Foreign Wars and the Masonic Lodge in Blackwell. He enjoyed eating at buffets, attending car and truck shows and go-cart racing. His outdoor hobbies included boating, fishing, hunting, camping and going on vacations. He also enjoyed working on small engines and VW cars.

A graveside memorial service is scheduled for 1:00 p.m., Thursday, March 31st in the Blackwell Cemetery with Terry Ricketts officiating. The Masonic Lodge will perform masonic rites. Military honors will be presented by the United States Army.

A memorial has been established in his honor with the Blackwell Veterans of Foreign Wars in c/o Roberts and Son Funeral Home, 120 W. Padon, Blackwell, Oklahoma   74631.