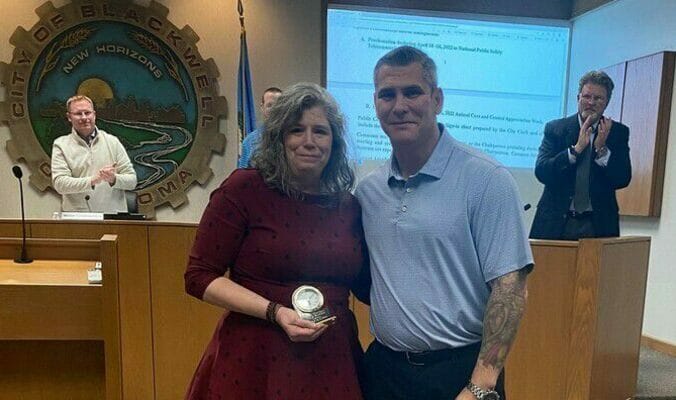 The meeting began at 6 p.m., with Mayor T.J. Greenfield recognizing the services of all organizations that assisted the City of Blackwell with extinguishing fires in Blackwell on April 6.

“The City of Blackwell would like to take a moment to thank the following emergency services who battled raging fires in the fierce wind through most of the late afternoon and into the night,” Greenfield said.

Next, the Council recognized the week of April 10-16 as National Public Safety Telecommunications Week, as well as Animal Care and Control Appreciation Week.

“Talking about [Wednesday’s] fires, what a time to recognize these people,” Chief of Police Dewayne Wood said before complimenting the dispatch team at the Blackwell police and fire station.

Wieland then spoke about Vargas, the city’s head librarian since 2017, who retired last week.

“Never have we ever had a lady that’s come to our town and done so much for our community and our kids,” Wieland said. “I refer to our library as the central nervous system of our city, and Lisa has done so much for our kids. She was a rock thrown into the lake of this town, and I don’t think we’ll ever realize just how far her ripples went out or how many people she touched.”

Vargas thanked the community, the city and the library board for taking a chance on her.

“In four-and-a-half years, we have become so much more than just a book warehouse,” Vargas said. “We’re here for the kids. We’re here for everyone. I love being here, and I will be back.”

Greenfield addressed Vargas, stating that his daughter has loved coming to the library during the last few years and has had a great time with all of the programs the library has had to offer.

During reports from city department leaders, an emotional Hanebrink approached the lectern to address the Council in regards to the April 6 fires. Hardly able to speak, Hanebrink recalled the day’s incidents, including a car wreck, a fatal oil rig accident and fires on the south side of town that evening.

Hanebrink praised his crews and thanked those who responded to help.

“I just want to say how much I appreciate Blackwell Public Power, and Animal Control, and Blackwell P.D,” Hanebrink said. “We had about 20 units from around the county. Everybody in Blackwell helped out, and I just can’t show all the appreciation I have for all of these departments enough.”

Wieland followed up Hanebrink’s tearful speech, saying how much of an honor and a privilege it is that the men and women who combat these disasters serve the City of Blackwell.

Moving onto business, the Council approved Resolution 04072022, under which the City of Blackwell will receive $573,044.00 in American Rescue Plan Act funding as a response to the coronavirus pandemic. The money will pay for general provisions for government services.

Next, the Council approved a Community Development Block Grant for $450,000. The grant will help pay for a waterline replacement project.

The Council then approved an amendment to the City of Blackwell’s revised and restated Oklahoma Municipal Retirement Fund.

The Council also approved a mutual aid agreement with the cities of Newkirk and Tonkawa, ensuring that the cities will work together to provide and receive assistance from one another for electrical services in the event of a conflict or emergency.

The Council ended the night by voting to spend $1,800 from the Blackwell Public Trust Community Project Fund to bring Inspyral Circus to next month’s Tulips A Bloom Festival.

For 45 years, The Friends of Nardin have kept h...

Tractor Club descends on Pawnee for fun and food