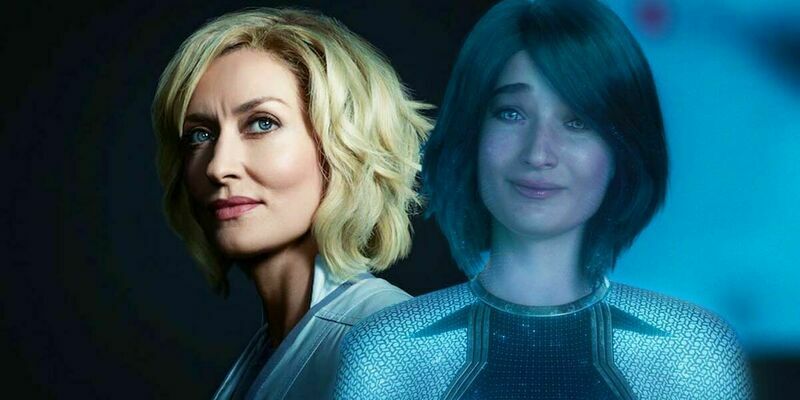 “He was always willful. And none of this bothers you?”

Paramount+’s HALO series has had an incredible 4-episode stretch so far with the fifth dropping this Thursday on the Viacom-owned streaming service that has capitalized on Paramount’s brand recognition and franchise-building to make hits like “Yellowstone 1883”, “Star Trek Discovery”, “Sponge Bob”, and now “Halo” into household TV names.

I talked about the backlash facing the Halo series when it came to the main character, Pablo Schrieber’s John-117 aka Master Chief and how he broke the franchises’ “no face” rule within the show’s opening hour, and how adaptations are different than their source material for good reason.

But as Halo has continued, I’ve found a new appreciation for their interpretation of Dr. Katherine Halsey and the new creation of the Cortana A.I. that has been as synonymous with the franchise as Master Chief and his iconic emerald green armor have since the 2000’s.

In the Halo games, Dr. Halsey was only ever referenced in passing and seen as a character in the prequel game, “Halo: Reach”.

Her character was a driven and somewhat benevolent scientist responsible for creating the Spartans (genetically modified super soldiers) to combat the threat of The Covenant, a cabal of religious aliens on a galactic jihad.

In the series, Halsey is front-and-center, played with frigid presence by British actress Natascha McElhone (The Truman Show, Designated Survivor) and it is here she is given a re-write as a somewhat sinister Dr. Frankenstein who is employed by the United Nations Space Command (UNSC) and the Office of Naval Intelligence (ONI) but very clearly has her own agenda.

In Paramount+’s Halo we get a much more horrific birth of Cortana, a darker desire for Halsey to play God, and something that most movies and TV shows are sorely lacking- a morally grey female antagonist.

In the Halo game series, Cortana is simply an artificial intelligence with a vast trove of knowledge and experience. In the series, Cortana is the result of a “flash cloning” of Dr. Halsey- creating a human clone from scratch that is made to be alive long enough to harvest parts from before they die.

Halsey’s clone lives long enough to pick Halsey’s mind before the clone’s brain is digitized and augmented into becoming “Cortana”, a process with cyberpunk body-horror that makes you wince. It is here that Halsey shows no remorse for basically “killing herself” and using the Cortana Program as a way to dig her claws deeper into the already conflicted John (Master Chief).

The characters around Halsey react to her with disgust and fear, but her Spartans, her children, idolize and love her, none so much so that John (Schrieber) who was groomed by her since birth to become one of her weapons. There’s a sort of Norman/ Norma Bates relationship at play, and the result on screen is spine-tingling with implications.

There is a lack of “good” female antagonists. Recently, few that come to mind include Rosamund Pike’s Amy Dunne from 2014’s GONE GIRL or Lena Headey in DREDD and HBO’s “Game of Thrones” or, (spoilers), Emma Mackey in DEATH ON THE NILE. That’s a sparse list.

Dr. Halsey is mysterious and, at times, shows flashes of wide-eyed and driven lust for knowledge. To make matters more complex, she is at odds with her daughter Miranda Keys and, we see, Miranda lament to Spartan Kai-125 (Kate Kennedy) that she was jealous and resented the Spartans because of her mom choosing “them” as her real children.

I look forward to seeing how her character continues on “Halo”, and expect to be genuinely surprised as it does.

What do you think? Do we need more female baddies?