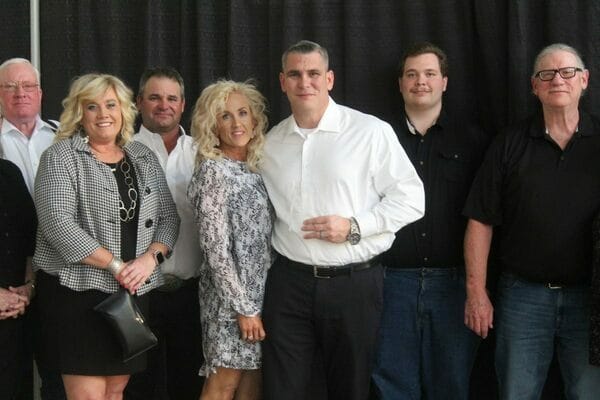 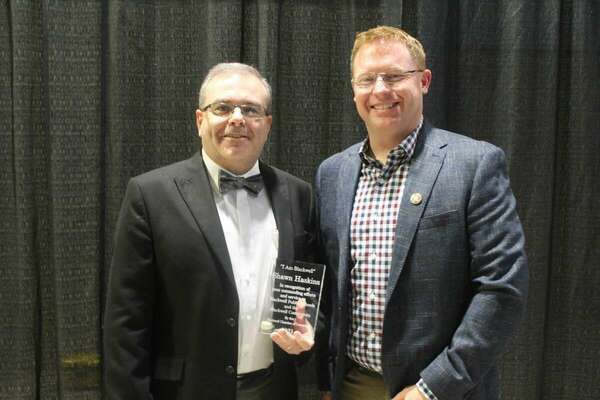 The event began at 7 p.m. in the Blackwell Event Center with a welcome from Danen Everly, the incoming Chamber of Commerce president and executive assistant medical staff coordinator at Stillwater Medical Center – Blackwell.

After introducing the sponsors and guests for the evening, Everly announced the recipient of the Outstanding Citizen Award, the first honor of the night.

The award went to Wieland, a U.S. Navy veteran and former Blackwell police officer. He previously served as the city’s code enforcement officer, and then he served as interim city manager following the 2021 termination of former City Manager Janet Smith. He was then formally appointed as acting city manager.

Everly praised Wieland for bringing the City of Blackwell together. She noted his commitment to the community and those who call it home.

A tearful Wieland received a standing ovation by the near-full house at the Event Center as he made his way to the lectern.

“I am tremendously humbled,” Wieland said before adding that he was “speechless.”

“All I can say is that Blackwell is my home,” he said. “I’ve always given Blackwell my best, and I will continue to do so. Thank you very much to my friends and family.”

Mayor and outgoing Chamber President T.J. Greenfield then presented the “I Am Blackwell” Award.

Greenfield said Haskins had not only led Blackwell Public Schools through the coronavirus pandemic without fear or falter, but that he also led the charge on passing the school bond last year. The bond will allow the Blackwell High School campus to be completely revamped, adding handicap accessible ramps and making the facility safer.

“I’m just doing my job,” Haskins told the audience. “I’m just here doing what I’m supposed to do. We needed something done here in the community. I was told when I moved back here that school bonds are difficult to pass, that nobody likes to pay more taxes. But our kids needed that.

“I work with great people, and I’m in a great place, and I just want to say thank you. Truthfully, everyone sitting out there, you are the ones who deserve this ‘I Am Blackwell’ Award for doing this for our kids.”

After a rousing round of applause, Stacey Husted received the Chamber Director of the Year Award for her service and work in the community, including being on the Blackwell Board of Education and working at The Lunch Box.

The awards for 2020 and 2021 Businesses of the Year were given to Los Potros Mexican Restaurant and Stillwater Medical Center – Blackwell, respectively. Megan Holden did the honors, noting that Potros could “never say no” to a legitimate business of group seeking help. She praised the staff for their community spirit. She also said the hospital is an entity that is changing its own destiny day-by-day and continually moving forward.

Following the awards, Greenfield handed the reigns of the Chamber president’s role over to Everly. Greenfield thanked the community and local businesses for supporting the Chamber, and Blackwell, through the global pandemic.

Country music artist Sunny Sweeney then played the rest of the night away as the banquet drew to a close.