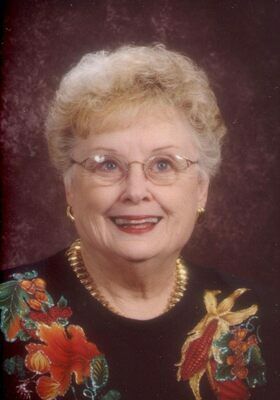 The graveside service for Nina Schatz will be on Monday, April 25, at 2 PM at Blackwell Cemetery. The Rev. Francis Bartley will be the officiant. Visitation will be from 1:30-2 PM at the Blackwell Cemetery Chapel.

Nina went to her heavenly home in the evening of April 19. She was born on a farm west of Blackwell on February 21, 1937, the daughter of Harry and Leona (Robertson) Hicks.

Her elementary education was at Lone Tree/Cooper School, followed by Blackwell High School, graduating in May of 1955. Following graduation, she began work in the classified ad department at the Blackwell Journal-Tribune.

In November of 1955, she married Harold Lambring. This union was blessed with 3 children: Kathy, Lisa, and Hicks. For the next 10 years, she was involved as a mother and homemaker, was a member of and served in many capacities at the Nardin Methodist Church; held membership in the Crescent Home Demonstration Club; served as a Nardin 4-H adult leader; did volunteer sewing for the American Red Cross; served as a home-room mother in her children’s classes; served as a bookkeeper for the Nardin Board of Education; was a secretary, treasurer, and reporter for the Nardin Parent-Teacher Association; collected funds for the United Way Campaign and the American Cancer Society.

In 1966, after all 3 children were attending Nardin Elementary School, she began to pursue an Elementary Education degree by attending Northern Oklahoma College where she was listed on the president’s and dean’s honor roll and graduated Magna Cum Laude with an associate’s degree. She then attended Northwestern College and was again listed on the president’s and dean’s honor rolls. She graduated in 1971 with a Bachelor’s Degree in Education. As an undergraduate, she was active in the Student Education Association, Phi Theta Kappa and Kappa Delta Pi sororities. In 1973, she received her Master’s in Education degree as well as a Reading Specialist’s Certificate.

After starting her teaching career at Houston Elementary School in Blackwell, she then

spent her next 19 years at Billings Public School where she organized and taught the first Chapter 1 Title Reading program. She initiated open house and parent-teacher conferences and co-ordinated the gifted program. A summer reading program was begun by her because of no reading availability for the students during the summer. She was selected as Teacher of the Year by the Billings Classroom Teachers Association and also was chosen Teacher of the Year by the Noble County Rural Teachers Association. She was also a member of the Cimarron Reading Council. In 1984 she was the runner-up for State Teacher of the Year.

Following her tenure in Billings, she became the librarian at Ponca Mid-High in Ponca City where she retired in 1997. In 2002, she came out of retirement and her career then took her to St. Mary’s School in Ponca City until her retirement from there in 2009.

While teaching and before concerns for her health, she was a member of AAUW, Kay County Reading Association, Friends of the Library, as well as many other civic organizations. As a member of St. Paul’s Methodist Church, she and her husband Jimmy were members of the Voyagers Bible Club

She was preceded in death by her husband Harold in 1989.

She had many interests and hobbies. She loved to bake (as well as collect and make new recipes), jigsaw puzzles, gardening, sending cards to family and friends for birthdays and other occasions, and cheering nursing home residents with her gifts of cards to them.

She was preceded in death by her first husband Harold Lambring, second husband Jimmy Schatz, her daughter Nina Lisa Lambring, a brother Orvin Hicks, and her parents Harry & Leona Hicks.

She is survived by her children: daughter Kathy (Stan) Thomas of Katy, Texas, and son Hicks Lambring of Ponca City; grandson Chris (Allie) Thomas and their children Riley and Brynn of San Marcos, Texas; granddaughter Brittany (Joel) Stalica and their daughters, Elizabeth & Kaitlyn (twins) and Kelly of Apex, North Carolina.

Memorial Contributions may be made in her name to Hospice of North Central Oklahoma, 445 Fairview Ave, Ponca City, OK 74601.