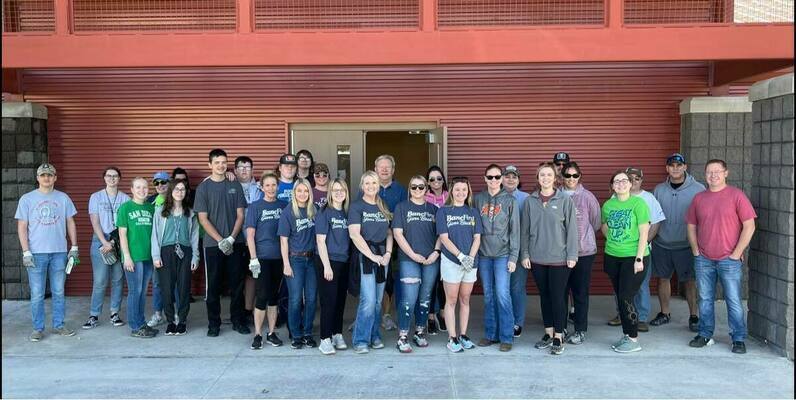 The City of Blackwell, in partnership with the Blackwell Area Chamber of Commerce, hosted the city-wide trash-off event Saturday. Event organizers reported a record turnout for the annual event, which began in 2015 as part of Oklahoma’s participation in the Great American Cleanup.

More than 30 volunteers met at the Blackwell Fairgrounds Livestock Pavilion to receive trash bags, T-shirts and gloves. They picked up trash along Main Street. They also cleaned up litter at school campuses, the B Street Ball Park and Blackwell’s various city parks, including Riverside, Legion, Bagby and Strickland-Harris.

City of Blackwell Administrative Assistant Cindy Gaddis, who spearheaded the event, said she was thrilled by the turnout. “We partnered with the Chamber of Commerce, and the turnout was amazing,” she said.

“We usually get a small crowd, but this time, we had around 30 or more people, and almost everyone picked up at least two bags full of trash each. “We also were able to plant 10 monkey grass and two vitex in the City of Blackwell sign at Memorial Pool, and 10 moneywort flowers in the Statue of Liberty statue at the pool as well. I am looking forward to doing this again next April."

“The Chamber of Commerce was proud to co-host the 2022 Great American Cleanup alongside the City of Blackwell,” Chamber President Danen Everly said.

“It is important to the Chamber to aid in keeping Blackwell beautiful. We want people visiting our town to see a clean and welcoming community. We are proud to have had more volunteers this year than ever before and are very appreciative of all the people who helped this year. We hope to get even more people involved in the years to come.”

The first Trash-Off Day was hosted by the First United Methodist Church and the Blackwell Area Chamber of Commerce.