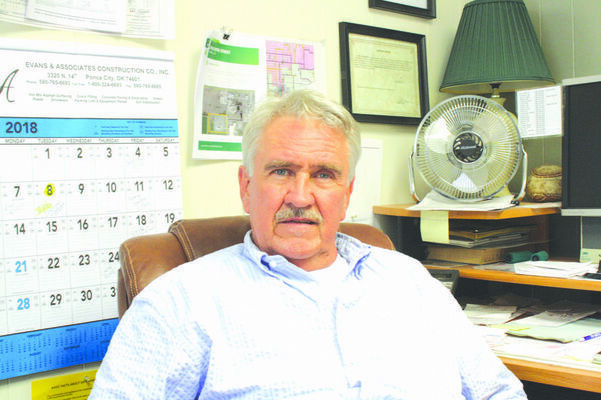 EDITOR’S NOTE: This story is the third in a series profiling the four candidates running for the Kay County District No. 3 Commissioner’s seat. The series began in the April 27 edition. The Journal-Tribune will discuss the final candidate in an upcoming edition.

Paul Skidmore has his sights set on returning to the Kay County District No. 3 Commissioner's seat, and he’s aiming to finish what he started, he said.

“I believe that you should strive to make a difference in all your endeavors,” Skidmore said. “Public office is work, and work requires effort at every turn. I had my work cut out for me when I was elected as District 3 Kay County Commissioner in 2014.”

Skidmore said the two ingredients he thinks are necessary to make a person good at holding office are being a good listener and being conservative with finances. Without these qualities, daily operations would come to a standstill.

“At the time when I was commissioner, two wind farms expressed interest in using District 3 roads,” he said. “A road-use agreement contract was negotiated, and our finances were in place to purchase the Haliburton property on 29th Street, where the District 3 county barn is now located.

“Negotiations were made on the purchase price for over one-half million dollars, and with contacts I had made through county government and longtime friendships, I was able to put a team of legal and financial assistance together to secure the contract on the property. When the contract was signed the next day, one-half payment was made to rural development, and two weeks later, the loan was paid in full.”

Skidmore continued, saying that a 65-by-175-foot barn was built on the property and paid for in full. He also negotiated with the producer of the natural gas well on the property to be given to District 3 for heating the barns.

“I left office with in excess of $400,000 remaining for District 3 use,” he said. “If elected again, I will continue to improve on District 3 roads and bridges with integrity and discernment, and always give equal consideration to the requests and problems of both large and small landowners. My term was debt-free other than the standard lease payments for graders and an excavator and loader from the previous commissioners.”

He was the owner of a contract excavating business for 38 years. He contracted with ONEOK, Cities Service and various oil and gas producers.

“My first term as commissioner, my priority was the purchase of a new county property,” he said. “If elected this term, my priority, in addition to other duties, will be to open the shortcut to Ponca City.”