TOP GUN MAVERICK: If cinema is church, Tom Cruise is a God. 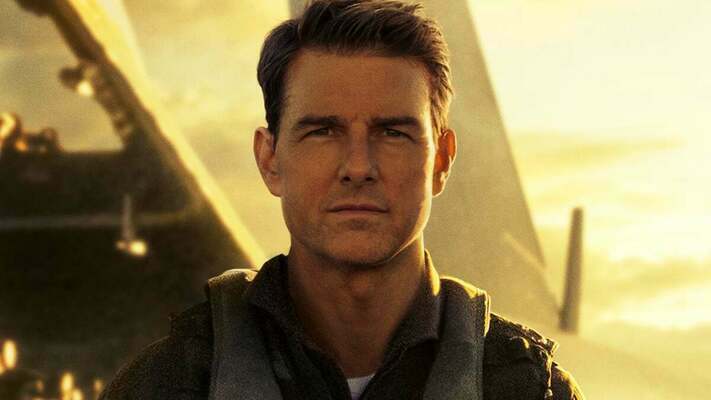 “The end is inevitable, Maverick. Your kind is headed for extinction.”

These lines, exchanged between Ed Harris’ drone-adament Naval commander and Tom Cruise’s Maverick early on in the film set the stage contextually for both the film, and the real-world implications this weekend’s blockbuster TOP GUN: MAVERICK represents.

Almost 30 years after Pete “Maverick” Mitchell graduated from the Top Gun Flight Academy in Miramar, San Diego, he is sent back to train an elite crop of fellow graduates for a daring high stakes mission to bust a nuclear bunker in an unnamed (believed to be Russian) country.

Among the graduates under Maverick’s instruction is Bradley “Rooster” Bradshaw (a star-making turn by Miles Teller), the son of Nick “Goose” Bradshaw, Maverick’s wingman who died tragically in the first film.

Having to face the troubles of his past, including an old flame Penny (Jennifer Connolly), and grapple with the realities of future warfare, Pete Mitchell is racing against the clock to prepare these young hotshots for a mission that none of them might come back from.

TOP GUN MAVERICK was set to release in the summer of 2020, and was delayed almost two years by Paramount and Tom Cruise due to the coronavirus pandemic, with both the studio and specifically the star adamant that this movie be a theatrical experience. One Memorial Day weekend and some cool $150 million dollars later, it’s safe to say the gamble paid off.

Legacy sequels have had a mixed reputation in the past- for every “Ghostbusters Afterlife” (2021), “Jurassic World” (2015), and “SCREAM” (2021) you have your “Terminator Dark Fate” (2020), your “Star Wars: The Force Awakens” (2015), and your “Matrix Resurrections” (2021). Not to say some of them are “bad”, just that they miss the mark- the mark being that fine balance of nostalgia-driven storytelling and making the “new generation” relevant.

TOP GUN MAVERICK is the best of the best. It’s an emotional film from start to finish, and I can say with absolute honesty that I cried no less than 4 or 5 times during the film’s 2-hour runtime.

Tom Cruise is the last of the real movie stars.

A bona fide God, Cruise has made his name selling his films with his heart on his sleeve through fierce dedication and the aptly coined “Cruise Control” which dictates he has final say in nearly every aspect of his blockbusters from hand-picking directors and the cast to editing and soundtrack options.

It’s what separates Cruise’s catalog from the rest. It’s why we’re 7 Mission Impossible films deep, and why a film like MAVERICK with no superheroes or brand name capes and wizards was able to do what almost no other straightforward action drama has done in nearly a decade.

It’s why the film starts with Ed Harris’, named “The Drone Ranger”, gives Maverick a scalding speech about how stick-jockeys (pilots) are being phased out for a new generation of automated warfare. It speaks volumes for an era of Hollywood film-making where once action stars and A-listers sold films has now become a race for how many multiversal superheroes can be crammed on a poster.

MAVERICK is a generational story about grappling with the past, on-top of being an edge-of-your-seat thrill ride where the thrust of the supersonic jets almost makes your eyes bleed.

Maverick faces Iceman, his rival-frenemy from the first film played by an ailing Val Kilmer in one of the film’s most tear-inducing, throat-clogging scenes where Iceman (hardly able to speak) consoles Maverick about letting go of the past to properly train Rooster and escape the shadow of Goose’s death, which is a lingering motif throughout the film.

The two embrace in a tearful hug, one that feels real for both the characters and the actors, reunited after all these years after Kilmer’s real-life battle with throat cancer.

In once emotional scene, Maverick observes Rooster in the sea-side bar, mustache and aviators all, as he’s playing the piano to “Great Balls of Fire” as his father Goose did to a young Rooster in Tony Scott’s original film, complete with the flashback to the scene. It’s a hard to watch scene that sticks with you, and goes to show how MAVERICK succeeds where other films like it fail- it’s a human drama first, and an action film second.

In another, Maverick and Penny lay in her bed, talking about the past. When Penny’s daughter unexpectedly arrives early from a sleepover, Penny rushes him out of the second story of her house, and Maverick charmingly tells her “I’m never leaving you again”.

The two have had, we are told, a complicated past. They’re old flames who constantly find eachother at the wrong point in the other’s life, and it seems now at the crossroads of Maverick’s life, he has found his happiness and closure with both Penny and with the magnitude of accepting Goose’s death and the relationship with Goose’s son.

Cruise possibly gives the best performance of his career here, potentially tied with THE LAST SAMURAI. He looks unsure of himself, red-eyed, and hung-up on the past. A far cry from the cool, collected, and boisterous Maverick we saw in the original TOP GUN and the action-star persona Cruise captures in his recent hits like MISSION IMPOSSIBLE and the JACK REACHER films.

If anyone is capable of bringing “old fashioned” movies back in a big way, this weekend proved it was Tom Cruise. My friends and I saw MAVERICK at a 12:20 p.m. showing Monday in IMAX, and I haven’t seen a sold-out theater of that magnitude and diversity since the early 2010’s at a midnight screening of the latest big-budget effects-driven superhero or fantasy flick.

There was hardly a dry eye in the house. People cried, they clapped, they cheered, they chatted. They crowded the lobby in their “Top Gun” shirts, hats, aviator sunglasses. Families young and old. It was surreal to see a megaplex crowded again for a movie as old-fashioned as TOP GUN MAVERICK.

The stunts and aerial action here, done as in-camera as possible, defy logic and expectations. The final mission puts you in the cockpit, and you are strapped in and ready to die for the cause. It takes your breath away all the way into the danger zone, and when the mission ends and you’re allowed to finally catch your breath you will believe in not only “movies” again, but maybe in the American dream as well. It honors the original cult-classic and transcends generational sequels altogether. It is the kind of symbiosis that will be emulated- never replicated- for years to come.

TOP GUN MAVERICK is an emotional, action-packed thrill-ride that is as close to perfection as films can get. It absolutely demands to be seen. It is now playing at The Hub in Tonkawa, the Cowley Cinema 8 in Winfield, and other major theaters.