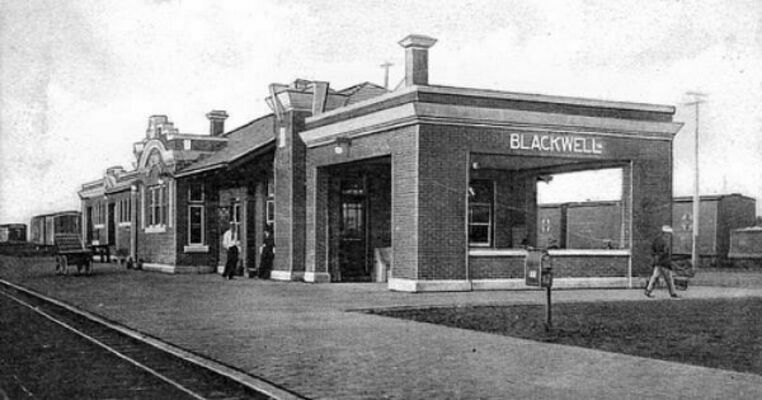 Editor’s Note: This story is the first in an occasional series, “Rail Tales,” featuring people who worked on local railroads during their heydays.

Steam engines still rolled down the railroad tracks in Kansas in 1942, carrying passengers and freight to and from towns big and small.

That November, 17-year-old Jim Galloway read a newspaper ad in Harper, Kansas, that alerted Galloway to an apprenticeship opportunity with the Atchison, Topeka & Santa Fe Railway.

The railroad needed to train someone to run the telegraph at its local depot.

Galloway put in his application, kicking off a decades-long career that would take him across the Great Plains and even around the globe, making sure passenger and freight trains reached their destinations safely.

That job eventually took him to Blackwell, where he served as the railroad depot agent until the station shut down in 1987. But his story doesn’t end with the depot’s closure.

For 44 years, Galloway was “Mr. Santa Fe” – and his stories are still rolling on. “I enjoyed my railroad career,” he said.

HOW IT ALL STARTED

Long before radios and computers directed train travel, railroad depot agents and telegraph operators typed out train orders, which told engineers and conductors where and when to go – and where and when to stop.

After receiving the orders and typing them up on paper, Galloway used a wooden stick called a “hoop” to give the orders to passing train crews.

“I copied train orders and handed them up to trains so they’d know which siding to take and not have a wreck,” Galloway said.

Galloway had to learn Morse code, the universal signal for telegraph communication that consists of different combinations of dots and dashes.

Each combination spells out words and phrases, and the signals traveled down long telegraph lines alongside railroad tracks. “You had to learn the code,” Galloway said.

“When you first start out, folks had to write the train orders, but then you got to where you could type them. I took typing in school, so it was easy.

The hard part was learning the telegraph.” Galloway mastered the skill, though, putting it to use when he served in the U.S. Army during World War II.

He was drafted in June 1943. And had it not been for the mistake of a doctor, he might never have returned home.

ON LAND ACROSS THE SEA

Galloway served as a telegraph operator in the U.S. Army’s 720th Railway Operating Battalion, and he was stationed in England, Belgium, France and Germany.

The battalion moved military supplies and equipment — as well as German prisoners of war, who were transported by rail to ports and shipped overseas to the United States and other Allied countries.

“I liked England,” Galloway said. “I was there six months. … Then we shipped out from there to France 45 days after D-Day. We went across the [English] Channel. It wasn’t a pretty sight. Still, 45 days after D-Day, we still saw lots of smoke in the air over the channel and bodies still in the water.”

Shortly after arriving in France, Galloway and another battalion member operated a makeshift depot out of a railroad boxcar, working 12 hours per day, seven days per week.

During lunch one rainy day at that makeshift depot, Galloway fell, hit his head and cut the tendon of his left index finger on a C-Rations can.

A few days later, a military doctor at a field hospital stitched up the festering wound.

After a couple of days at the hospital, Galloway was supposed to return to his railroad assignment, but a heavy German counter offensive was starting.

All available personnel were being sent to the front. Releasing him from the hospital, a doctor checked his injury and said he couldn’t go to the infantry because he wouldn’t be able to pull the trigger of a rifle – even though Galloway was right-handed.

So, he was sent back to the railway battalion.

“That was during the Battle of the Bulge,” Galloway said. “Anybody that was being shipped back from the hospital, if they were capable, they would send ‘em to the infantry. “I’ve thought about that several times since. That doctor making that mistake might have saved my life. But, on the other hand, it might have caused some other young feller to lose his life.”

Galloway returned home from the war in 1946, and he went back to work for the Santa Fe in Harper. There, he fell in love with more than the job.

“Then from there, I continued dating a girl in Anthony I had dated before the war. I was a slow mover, like the Doodlebug,” he joked, referring to longtime branch line passenger trains that operated across the Midwest.

That young lady was Galloway’s wife, George Ellen. The couple married, and 2022 marks their 75th anniversary.

The couple stayed in Harper for 12 more years before moving to the Ashland, Kansas, depot, where Galloway worked for 15 years. After that, they came to Blackwell, where Galloway became the depot agent. As depot agent, Galloway’s job was to work with customers and meet their shipping needs.

He’d order rail cars, tell customers the status of their shipments, coordinate with train crews and ensure that business was running smoothly.

Part of the job was to be involved in the community, attending civic clubs and other meetings to represent the railroad.

Wherever he worked, he considered himself to be “Mr. Santa Fe” and tried to be the best representative of the railroad that he could be, he said.

When Galloway started at the Blackwell depot, it was processing far more than $1 million in goods annually.

That money slowly went away.

Blackwell’s once thriving economy included countless businesses that shipped products by rail, including the Blackwell Zinc Co. smelter, a local flour mill, a gypsum plant and several other industries. Times changed, business faded and computers came onto the railroad scene.

By early 1987, most of the other depot employees had been laid off, leaving Galloway to hold down the fort as railroad traffic declined and business dropped off. In February, he received a letter from the Santa Fe, telling him that the depot’s closure was imminent. Galloway wrote a letter back and asked if the railroad would keep the depot open just one more month.

His 62nd birthday was in March, and he could retire then. The railroad agreed, and on his birthday, he locked up the depot for the last time. He dropped his keys in the mail slot as he walked away from a decades-long railroad career – and from a time in American history that is no more.

His last day was a Saturday.

The following Tuesday, he received a letter from the district railroad superintendent, who said he’d reviewed Galloway’s record.

Galloway, the superintendent said, was one of the finest employees he’d ever supervised.

Now 97, Galloway still has his memories of the good old days of American railroading.

“I loved my railroad career,” he said. “All of it.