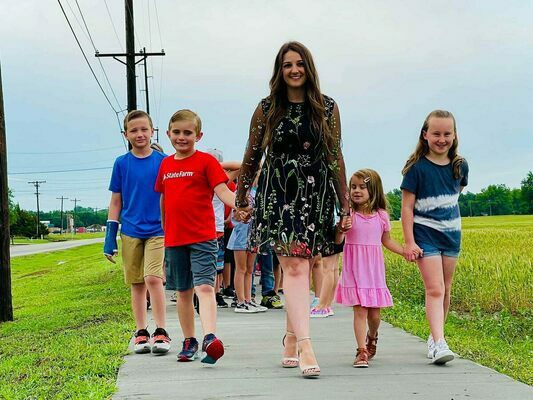 Celebrated children’s author Shel Silverstein once wrote about “Where the Sidewalk Ends.”

But for Blackwell Elementary School, where the sidewalk ends is only the beginning.

On May 20, the last day of school, teachers, children, and representatives from the City of Blackwell and State Farm Insurance cut the ribbon on the finished Ferguson Street sidewalk, which extends from the elementary school to the intersection at 13th Street.

This ribbon-cutting ceremony closed the book on three years of planning for teacher Haley Curfman, who led the initiative to build the sidewalk, as well as the City of Blackwell and State Farm. But where one book closes, another is set to open.

“I’m very happy about the sidewalk,” said Curfman, who secured the funding for the sidewalk in 2019 through a grant with State Farm.

“It was a long time coming, and our town really pulled together to get it done. Before the sidewalk, there were lots of mornings I’d seen students trying to walk on the side of the street in high traffic just to get to school. The sidewalk fixed a big safety issue for students. But, traffic wasn’t the only issue. Even when kids walked in the field, they would oftentimes come to school with wet socks and/or muddy clothes.”

Curfman described the area prior to the sidewalk as a “mess.”

She credited local State Farm agent Mark Estep, saying he is “a huge supporter of all things Blackwell, and was the one that initially told me about the grant.”

“State Farm was great,” Curfman said. “You have to be ready to file for the application the moment it opens, but once I wrote the grant, the rest of the work was on our community to keep voting, and vote they did."

“They kept us in first place the entire voting period," She continued, "Our community is the magic behind these things happening here. They really stand behind students, teachers and our school. Once we got the grant, the city took it from there. There was a lot of decision-making that went into the ‘how’ of it all. Drainage areas had to be accounted for, the timing of other city projects, manpower, material and a whole lot more funding than the $25,000 [grant] was needed. When I gathered the info for the grant, [Mayor] T.J. Greenfield helped supply me with city demographics that really helped. I used that information in writing the grant, and in showing our school’s need for the sidewalk.”

Estep said he is excited for Blackwell, calling the sidewalk a “win for our entire community.”

“Haley Curfman is a very talented individual,” Estep said. “She is the catalyst of this grant. She applied for the grant, and her application was selected as a finalist. From there, it went to avoting contest all across the theUnited States. This is where it gets amazing: Our little town rallied Haley’s grant to first place by voting every day. That’s just amazing to me, that our town had the most votes on a nationwide contest. The contest website updates results in real time. Haley’s grant was first every day.”

Estep then praised the city of Blackwell’s Streets &Parks Department.

“If you are going to put the title of ‘hero’ out there, you have to go with our street department,” he said.

“Those guys are the muscles behind this thing. That sidewalk is perfect.” Estep concluded by saying:

“I’d like to personally thank every person that voted for this sidewalk. You made a difference. There’s some exciting stuff in Blackwell right now fixing to happen with our school bond. This sidewalk is great kick-starter leading into the school bond.”

City Manager JerryWieland, who also attended the sidewalk’s unveiling, said he is excited about the sidewalk and the city’s future.

“The City of Blackwellis very proud to have just completed the Blackwell Elementary School sidewalk project,” Wieland said. “Blackwell street department, led by Chuck Anderson, did an outstanding job on this project.”

But the sidewalk isn’t set to end at 13th Street. If the City of Blackwell has its way, all of the schools Blackwell will be connected by sidewalks soon.

“The City of Blackwell has recently applied for a TAPS, ODOT grant for a sidewalk to extend from 13thstreet, down Ferguson to Main Street,” Wieland said.

“If awarded this grant and upon the completion of the project, this would provide a safe route to all schools located in Blackwell.

“The city would like to thank all citizens that supported the elementary school sidewalk project.”