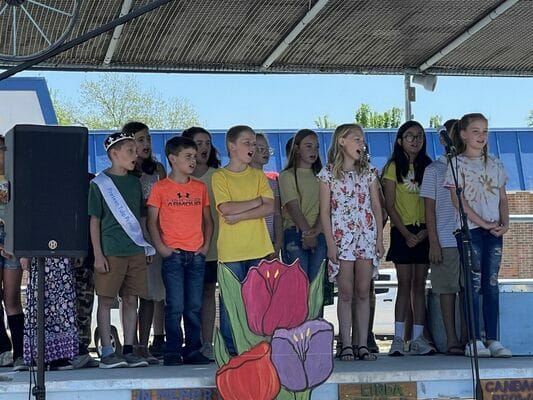 April showers bring May flowers, as the old saying goes. But no one was more surprised to see “tulips blooming” on Main Street this year than Shantel Emerine, who helped revive the 10-years-dormant Tulips-A-Bloom Festival for a new age of Blackwell residents.

Bringing the event back took hours of planning, the help of various businesses and friends, and, perhaps most of all, sheer will, Emerine said. According to Emerine and the Tulips Committee members, the May 7 event brought in more than 400 guests and more than 30 vendors, including non-profit organizations such as the Blackwell Animal Shelter, which hosted an adoption drive.

“We have such an amazing community,” Emerine said. “A lot of Blackwell citizens showed up, and all in all, it was a great turnout. “For our first year, it went great. Obviously, the flip side of that is that being our first year, there are some things we need to work on going into the future. The feedback has been positive, though, and has helped us with learning things we need to be prepared for going into next year.”

When asked how it felt to be instrumental in reviving a piece of Blackwell history, Emerine said that topic was discussed among the Tulips Committee members after the festival.

When interviewed by The Journal-Tribune before the festival, Emerine gave an emotional account of the sense of nostalgia linked to the festival.

“I remember the entire community came together to make the event happen, from community members to the city, to schools, churches and local businesses,” Emerine said when recalling past celebrations. “I remember the local bait shop having goldfish as prizes. I remember wearing matching shirts and getting to sing with my class. I remember looking around and seeing the adults with their kids, enjoying the food, shopping and watching their little ones sing.”

If people squinted through rose-tinted glasses on that hot Saturday in May this year, they could almost sense they were back on Main Street in the early 2000s, being children once more. Goldfish were in the Top of Oklahoma Historical Society Museum fountain to be caught as prizes; kids sang in the old Homeland parking lot to a captivated crowd; the air was filled with scents of sizzling barbecue and coffee. Families laughed and played, and smiles were painted on every face.

Going into the 2023 festival, Emerine said:

“With such an amazing crowd, we discussed [that] we could have used more volunteers to help with the overall event and the day of, like with games. We also discussed different options for next year to help make things easier, but it all comes down to the tulips festival needing more volunteers to be a part of our committee and help.”

Those interested in joining the Tulips Committee are encouraged to pay attention to Facebook to the “Tulip’s A Bloom Festival” page to see when the next meeting will be.

None of the Festival’s success, Emerine said, would have been possible without teamwork and dedication from the community.

“We have some amazing sponsors, businesses, and Blackwell citizens that have helped bring this event back,” she said.

“From all the committee members to ones that donated, to the ones that bought and donated prizes or simply gave their time to help with the festival, we really appreciate each and everyone who has helped. They’re all amazing, and we simply cannot just choose one.”