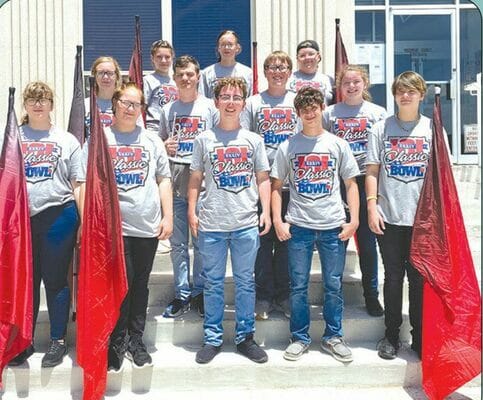 Woodward has a special place in the heart of Blackwell Public Schools Band Director J. Wayne Hudson. He taught there. His daughter was born there.

And for 10 years, he’s taken Blackwell band students there to participate in one of Oklahoma’s most iconic high school sporting and musical events: the K101 Classic Bowl.

“It’s a three-day band, it costs the kids not a penny to participate, and you’re going to be in a 200-member band,” Hudson said. “It is a cool thing.”

For 34 years, the Classic Bowl has brought together student-athletes and musicians from schools primarily across western Oklahoma for a weekend of fun and games – literally.

Student-athletes form sizable teams in various sports, and student musicians play together in a mass band during the halftime of the Saturday football game. For the first time since the pandemic began, the band was back together on Thursday, Friday and Saturday – and Blackwell High School band students were there.

HOW IT ALL STARTED

The event has grown and changed drastically since it began in 1989, and Hudson has been involved ever since.

“It was sponsored by K101 radio station, and it was an honor football game in that area, the K101 listening area,” Hudson said. “The first year, the band came in on Saturday, and there were 30 kids in the band. I had just taken the job as assistant director at Woodward, and me and the high school band director worked up some little patriotic tunes. We were going to stand out on the field at halftime and play.”

The band got off to a dismal start.

“The sky opened up, and it poured,” Hudson said with a laugh. “That was the end of the Classic Bowl One Honor Band. We were drenched.”

But no summertime shower would keep students, schools and parents from trying again. The next year, parents regrouped, planning an event that would draw in even more students and have a bigger impact on the region. The Woodward Band Boosters encouraged local businesses to donate food for music students, and they got enough area residents to agree to house the students for free, Hudson said.

The club also enlisted the University of Oklahoma’s band director.

The next year, the band was nearly 200 members in size. “They had it taken care of,” Hudson said.

The traditions of students staying in people’s homes continued until 2020 when the pandemic began.

The event was canceled in 2020, and a scaled-down version without a band took place in 2021. But this year, it returned. From Thursday through Saturday, students were housed in a dormitory building at Northwestern Oklahoma State University in Alva, about an hour northeast of Woodward.

They ate at the university, rehearsed on the university grounds and caravanned to Woodward on Saturday morning for a parade and, later, the game.

As tradition would have it, the University of Oklahoma’s band director, Brian Britt, was there to lead the band, performing before the large crowd at Woodward High School.

Blackwell students weren’t originally included in Classic Bowl, and it’s only because of Hudson’s Woodward ties that they are.

As the former assistant director at Woodward, Hudson has been able to get Blackwell students into the western Oklahoma-exclusive event.

Other schools participating include Woodward, Enid, Elk City, Guymon and Mooreland, to name a few.

“Us and Perry participate, but everybody else is west of Enid,” Hudson said. “Our kids got grandfathered in. When [Classic Bowl] started, directors would leave the area, but they’d want to bring the kids back. Because there’s nothing else like this anywhere.”