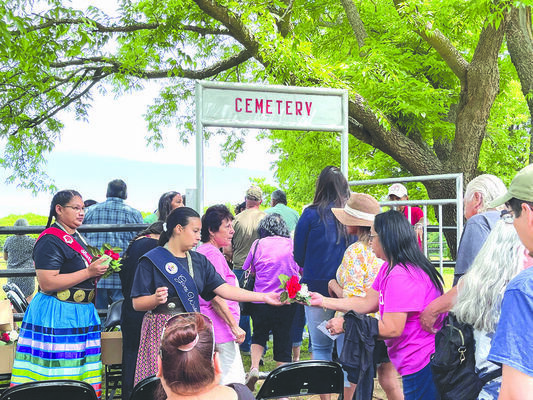 Alumni of the Chilocco Indian School, together with representatives from several tribes across the nation gathered at the Chilocco Cemetery in Newkirk Friday for the official unveiling and remembrance ceremony of the cemetery's memorial statue.

“We’re here today to honor these children,” Jim R. Baker started the ceremony. Baker is the outgoing president of the Chilocco Alumni Association, and a graduate of the Chilocco Class of 1960.

“This is a joyful day, but also a difficult one,” Baker said, “this is not the only cemetery like this across the nation.”

Dwight Pickering, a member of the Kaw Nation and the Director of the Kanza Human Development Division, conducted the prayer and blessings before introducing the various guests in attendance.

When the school closed in 1980, Baker explained that the cemetery was left abandoned before the Alumni Association stepped forward to begin taking care of the grounds.

“When I became Alumni President, I was handed a list with 49 names,” Baker recalled, “and through years of research and advances in technology, we discovered there was roughly 67 interred here.”

“Unfortunately I cannot tell you- and I don’t think anyone can- which of these graves belongs to whom,” said Baker.

One grave at Chilocco, said Baker, is the grave of the first child ever buried on the land. A girl from the Wichita tribe dating back to 1884 named Takare or “Take Care”. According to Baker, it is believed the children buried there belonged to the employees.

According to Baker, the cemetery was initially in a state of utter disrepair before several individuals began helping to clean up and restore the cemetery such as putting up new fencing and maintaining the lawn.

The Kaw Nation specifically was named by Baker as helping to provide financing for the restoration to put up the new fence. Baker thanked Kaw Nation Chair Lynn Williams as well as the Ponca Tribe and others for their dedication to restoring the site.

“We are never proud that our brothers and sisters are interred here,” Baker lamented, “but we can take pride in the fact that they will be cared for and honored as long as the Alumni Association exists.”

Representatives from several of the tribes, as well as family of those buried, were present at the ceremony.

Baker went on to mention that among Chilocco’s notable alumni which includes three Medal of Honor recipients as well as actor Wes Studi, is a name not many might have heard of- an Eastern Band of Cherokee man named Mark Harding who used his culinary experiences from Chilocco to help launch a struggling North Carolina donut chain into a global sensation- Krispy Kreme.

Dan SaSuWeh Jones, an acclaimed author, historian, and American Indian Artist of the Ponca Tribe, carefully constructed and designed the Chilocco Memorial Statue, and spoke to the crowd at the ceremony.

Jones recognized his grandmother and mother, who both attended Chilocco Schools. Jones painted at Chilocco in his youth, and recounted that when the school closed in the 1980s he worked as security and maintenance.

“The spirit here in Chilocco is strong,” he said, “people talk about ghosts but they never bothered me. I was very proud of the fact to be a part of this.”

Following the comments, a Cheyenne memorial song was played as well as a “traveling song” to guide the spirits of those buried and to be with them.

The names and tribes of those buried were all read, with those in attendance allowed to place flowers at the grave markers.

Chilocco Indian School was created before Oklahoma as we know it was recognized as a state. The product of U.S. Army officer Richard H. Pratt, Chilocco came to be in 1884 as an agricultural school for Native Americans.

Chilocco’s enrollment peaked between the 1950s and 1960s, with enrollment numbers above 1,200. Boys and girls from more than 120 tribes across the United States were there.

Upon its closure in 1980, Chilocco became property of the Kaw, Otoe, Ponca, Pawnee and Tonkawa tribes.