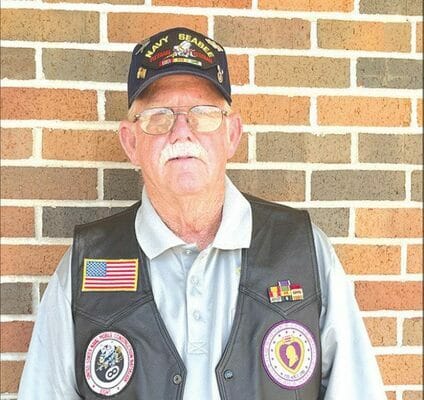 The Blackwell Area Chamber of Commerce is gearing up for the annual Fourth of July parade, and this year, the march will be led by U.S. Navy E-4 Seabee John Hoogendoorn.

The parade will begin Monday at 10 a.m. Line-up will begin at 9:15 a.m., with the contest for decorated bikes and wagons taking place at 9:30 a.m. At 1 p.m., a free-swimming event will take place at the Blackwell Memorial Pool.

The annual fireworks display will begin at dusk at the Kay County Fairgrounds on Main Street.

This year’s events are sponsored by Blackwell Tourism, the City of Blackwell and the Chamber of Commerce. Hoogendoorn said he looks forward to leading the parade.

“The Chamber called me, and I was moved and honored, to say the least,” Hoogendoorn said. Hoogendoorn joined the Navy in March 1967 after living and working in Ponca City as a lineman, a job he started during his senior year of high school. Soon, he found himself in Chicago, Illinois, on his way to Da Nang, Vietnam.

Hoogendoorn did three tours of duty in Vietnam between 1967 and 1969. During one of these tours with the MCV8 Battalion at the Phu Bai Base outside of Hue in Vietnam, he was injured during a rocket attack. He earned a Purple Heart.

“My right knee was cut up bad,” he said. “The rocket hit a tent that I was directly in front of. I think we laid there all night long in the bunkers, just waiting for it to end.” Midway through his enlistment, he returned home on leave to marry his wife, Sarah.

“I remember me and my buddy were getting married at the same time,” he said. “We talked to our CO about returning stateside early for our weddings, and he obliged. Not only that, but he let us take his plane back. We hopped on that plane, and it was a straight shot, eight hours, from Vietnam to California. We got out a week early, and we were one of the first planes to leave Vietnam.”

His unit was decommissioned in 1969.

He returned to the United States to go to Big Sur, California, to do work on a classified submarine base. In 1970, he and Sarah returned to Blackwell. He joined Kay Electric, where he worked for 40 years. During his time in the Navy, Hoogendoorn did extensive electrical work and “just about everything” that involved electricity, he said.

In addition to the Purple Heart, he earned 10 ribbons during his three-and-a-half years, including the Combat Action ribbon.

His Purple Heart medallion didn’t come to him until 2001. Sen. Jim Inhofe came to Ponca City to officially decorate Hoogendoorn.

“There was a lot of dignitaries there to meet him,” Hoogendoorn said. “We were given about two hours’ notice that he would be there. I was at work for Kay Electric and threw on a nice, white shirt. We went to the Ponca City airport, and Inhofe got off the plane and said he was there for one reason and one reason only: to award me. Anyone else would have to wait, if he had time at all. That was a very special and moving experience for me.”

He has four children and eight grandchildren. Hoogendoorn was instrumental in getting Blackwell approved as Oklahoma’s 13th Purple Heart City in 2020.

He and VFW Commander Cory Ingram presented the recognition to the Blackwell City Council.

The purpose of a community being called a Purple Heart City is to honor and remember military personnel wounded or killed in combat with hostile forces.

The Purple Heart is specifically a combat decoration and is the nation’s oldest military medal. It was first created by Gen. George Washington in 1782 and was called the Badge of Military Merit