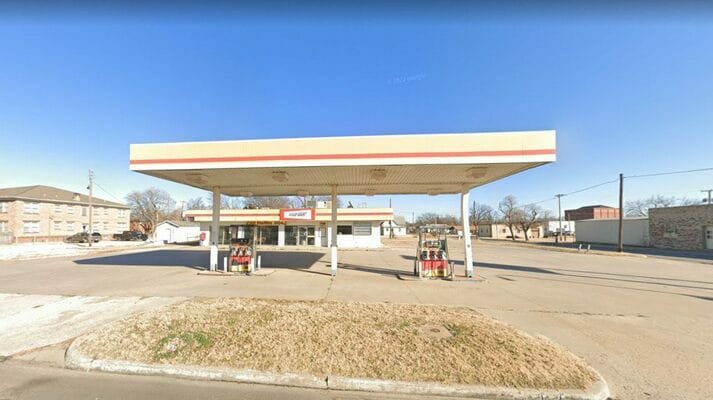 It’s easy to be blind to old places in Blackwell.

You can drive down Main Street and play memories in your head like a fuzzy old cinema reel, images in nostalgic rose-gold playing as the projector flickers and whirs, dust coughing from it as it gasps for the past.

The antique mall, the coffee shop, the old Homeland, a photography studio, the hardware store, even The Larkin looming ominously with it’s crumbling sides and boarded up windows, a far cry from the towering behemoth it once was that housed well-pampered travelers including famed lost aviator Amelia Earhart.

But my generation will always bring up one spot in particular: C-Mart.

It’s true name, Coastal Mart- a Shell station- was never used. Not by anyone who knew it. Sure, it changed brands and names over the years as it evolved into “Foodmart” in the last throes of it’s life, but it was always just “C-Mart”.

The 24/7 gas station on Main Street and Lincoln had pizza, cigarettes, drinks, snacks, beer, all the typical offerings of any small town gas station. It was all for sale. Except the beer, which always seemed to run away from them.

I recall fondly when I first moved to town in the early 2000’s always stopping by there for chips and a drink with my parents. I remember in high school, my friends and I would do the unthinkable while the rest of our classmates would take the few-block hike to Shepherd’s. We’d walk to C-Mart for a slice of pizza and (for me) a Code Red Mountain Dew out of the fountain.

For those keeping track, that’s about a mile-walk.

I think about C-Mart a lot. How convenient it was having a 24/7 gas station in the heart of town, for one. Anyone who was alive at the time can tell you how many late-night beer and cigarette runs they made to C-Mart. How many pizzas they ordered for their drunken friends.

I thought about C-Mart on Monday morning as a Blackwell High School driver’s ed car passed by me on the corner of Main and Lincoln as I was waiting to come into the newspaper office.

I looked up at the old sign, bleached by years of the harsh Oklahoma sun, faded beyond all recognition of the branding that was once there. The yellow and red paint job nearly completely eradicated by the elements.

The numbers still barely visible on the gas price: $3.35 for regular, $3.49 for Diesel. And that was from an era where those prices were “sky-high”.

It’s been cleaned out in recent years by whatever hand owns it now. Cleaned out or raided. There was always an exposed spot in the back kids would sneak into after it was left abandoned.

Bottles of antifreeze still sat in the dust-covered and dirty windows. Cigarettes rotted in their packs on the shelves behind the counter. Chips decayed in their packaging, long past their expiration date.

I thought about C-Mart as I watched that driver’s ed car pass me by.

“Kids these days”, as they say, will never experience that place.

“A wretched hive of scum and villainy,” as Obi-Wan Kenobi said of the Mos Eisley Cantina in STAR WARS: A NEW HOPE.

Kids these days will never make a run to C-Mart at 4 a.m. for pizza and cigarettes, squinting under the harsh blue-yellow fluorescent lights as they walk out to their cars only to be accosted by some shirtless guy on his bike asking for change, for snipes, or for the pedestrian to hear their new rap mixtape playing off their phone.

Kids these days will never have that luxury of going “I wonder how many Cookie Monster pajama pants I’ll see tonight” as they awkwardly wait behind someone paying for a pack of Carnival Reds with pennies and nickels, giving them a chance to eyeball the various glass pipes and bongs on display in the glass case behind the counter, watching some poor soul working there feed some monstrosity of a loaded pizza prepared for a drunken party into the oven.

Kids these days will never get to pop in there at 1 a.m. for a bottle of water or a soda, and get to see someone go to the cooler, grab a 30-pack of Natty or Keystone, and casually stroll out while the over-worked woman behind the counter yells obscenities and calls the police.

Kids these days will see C-Mart as an old, ghostly, worn down gas station from a bygone era, having to settle for the brighter, bigger, Casey’s out on the interstate.

Last year for our April Fool’s issue, I had posted our front page with a headline about C-Mart offering a “free pizza with every 30 pack shoplifted” and the response was honestly better than I had anticipated.

People had fond memories of that little place.

While C-Mart might be gone, lost forever to the ravages of time, our memory of it will always live on. One day, when it eventually gets bought and torn down, I will be there to lay flowers at the site.

Kids these days will see it, and think I’m crazy.