TV Drama "Redemption" to film in Blackwell this week 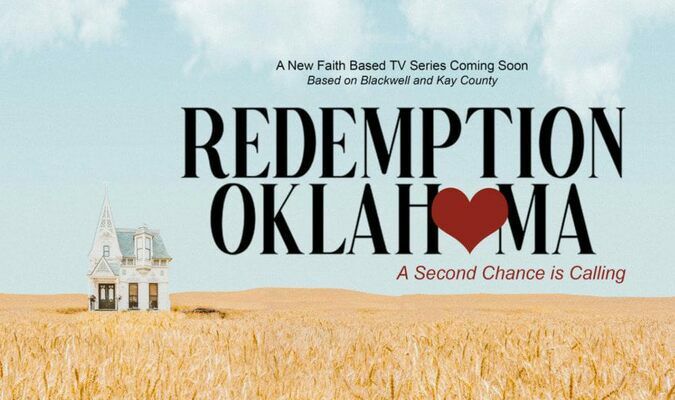 Cameras are set to roll on the long-gestating “Redemption, Oklahoma” TV series in Blackwell and Kay County this week.

Phoenix, Arizona-based production company GCM Media will be in Blackwell from Wednesday through July 12 to produce a short film promoting the new faith-based project.

“Showrunner Tray Goodman is a native of Blackwell and is bringing his show to Northern Oklahoma to create the kind of opportunity in Kay County that has been enjoyed in Tulsa and Oklahoma City, where a blossoming of interest in the entertainment industry has resulted from Oklahoma’s attractive tax rebate program,” production company officials said in a news release.

“Goodman assembled a team of award-winning cast and crew to produce this short film, which he will use to build support for the creation of the faith-affirming seven-part TV series starring Nick Searcy as the production’s main character, Pastor Jack.”

The cast also includes Loy Edge, who starred in “The Punisher,” along with Kay County actors involved in Ponca Playhouse productions, the company said.

The story follows Jack, a disillusioned pastor who wanders into a local diner at the end of his rope and at the bottom of a bottle.

In a drunk and delusional state of mind, he has a premonition of a mysterious woman and child who will be a “guiding light” for him on his “road to redemption.”

The project, directed by Goodman, is written by Mario Chioldi and Rusty Case and produced by Tamara McDaniel.

The production will be lensed by award-winning cinematographer Sam Erdmann. It will include original music by upcoming country music star Sophie Dorsten and new material by Micah Bell.

“Redemption, Oklahoma” has been in the works for some time now, with Goodman hoping to use the faith-based drama to make Blackwell a household name.

“Redemption” is being pitched as a “spiritual” spin on similar small-town dramas such as “TwinPeaks,” “The Waltons,”“Picket Fences” and “Virgin River.”

“Our goal here is to heal a divided nation by starting in the middle,” Goodman said when he was location scouting filming locations in2021.

“It’s called the Heartland for a reason. We want to create a genuine, true, faith-based drama that comes off as sincere rather than hokey or forced.” Goodman said every episode will have scripture to accompany it, and that the Bible verses will play into the themes of each episode.

In his trip to find filming locations, Goodman spoke to various residents, including local historian and author Terry Whitehead. Goodman said the success of the break-out series “The Chosen,” a streaming series hosted on its own private platform that was not hindered by any service or network, paves the way for something like “Redemption” to be viable.

“What we’re trying to do here for ‘Redemption’ capture lightning in a bottle,” Goodman said. “This is the kind of series that will highlight a hard-working community who believes in a day’s work for a day's pay. … ‘Redemption’ will be something for the whole family regardless of race, gender or creed.”