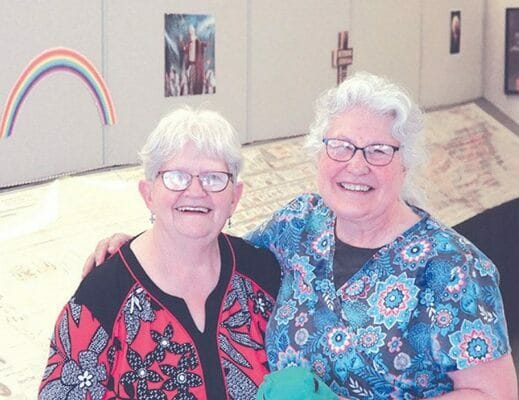 Rather than merely opening the Bible, a group of local church members hopes to help people walk through the book.

Members of the House of Prayer Church and Christians from across Oklahoma will open the Creation Simulation Learning Center, 110 N. Main St., on July 11.

Housed in the former Holy Grounds coffee shop, the learning center is a museum about the Bible, which Christians believe to be the spoken word of God.

The space includes numerous historical exhibits, pieces of artwork, graphs and other items that help people understand the Bible’s most notable events and people.

“If we can reach one person, it’s worth it all,” said Nellie Jack, the wife of House of Prayer Pastor John Jack.

The museum was formerly housed in a building in a small Minnesota town. But when the building’s owners moved, they sold the building, leaving the museum to find a new home.

That’s when the Holy Spirit stepped in, said Carol Perkins, who operated the museum in Minnesota.

Through a series of visions and dreams, Perkins said she felt led to move the museum to Oklahoma, where she knew fellow Christians who would help her reopen the museum and reach more people.

Among them was Tryon resident Debra Coleman, who now serves as the museum director.

“The Holy Spirit led me,” Perkins said. “No other way.”

Blackwell’s proximity to the Interstate 35 corridor, one of the most heavily traveled routes in North America, was part of the reason Perkins wanted to move the museum to Blackwell, she said.

She hopes that interstate travelers will come into town to learn about the Bible. Perkins began reading the Bible when her husband started his military service during the Vietnam War, she said.

When she started reading, she had a hard time understanding some concepts.

“I was only 19 years old at the time, and I thought, ‘How am I going to put all of these people together and get them straight?’” Perkins said.

“It took years, and I started really studying about the Hebrews. I thought, ‘If they can memorize the first five books of the Bible, we’re missing something.’”

With God’s help, Perkins said, she was able to put together the pieces of the puzzle: the times, dates, places and people who make up stories in the Bible.

A self-described “visual learner,” Perkins hopes to help others find a deeper understanding of the book by using detailed, colorful charts and other displays.

Some exhibits show how complex the human body is, and another shows the grandeur of the Milky Way galaxy.

The museum’s most prominent display is a copy of a timeline made during the late 1800s that overviews the entire history of the Bible and Christianity.

It was originally pieced together by the descendants of President John Quincy Adams, and it’s more than 30 feet long.

Moving the museum from Minnesota would have been impossible without God’s intervention, Jack said.

“Every time we came up against an obstacle here that we needed something done, God always sent the right people at the right time for the job,” Jack said.

The museum is both non-profit and non-denominational. It’s operated by the Oklahoma-based non-profit Women of Worship group, and it’s not affiliated with any particular church so that it can appeal to a wide range of people – Christians and non-Christians alike, Jack said.

Admission is free. The museum will be funded by donations and sales from its gift shop, featuring homemade crafts and gifts.

House of Prayer members regularly host craft fairs, and some of their handiwork will be available for purchase.

The museum will also offer space for people and organized groups to meet, pray and drink coffee, Jack said.

The museum will be open Monday through Saturday from 9 a.m. to 6 p.m. until July 23.

After that, hours will vary based on volunteer availability, and the museum will be open by appointment.

To make an appointment, call 580-670- 1776. Perkins and other volunteers hope the museum’s relaxing environment will help people find Jesus in their lives, Perkins said.