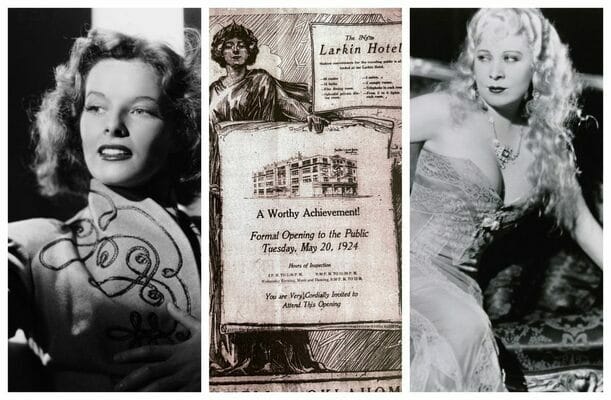 Towering over the intersection of Main Street and Oklahoma stands The Larkin Hotel. It’s features crumbling, it’s windows boarded up and splintering away.

The Larkin, officially opened in May of 1924, now represents the decay of the American dream that Blackwell once flourished under. A brick behemoth that held 66 rooms, 42 baths, fine dining rooms, a private dining area, 3 suites, and 4 sample rooms (rooms that could be rented for the display of wares) with a telephone in each room as well as “2 to 6” lights in each room.

The grand opening and tour for locals to finally see the structure was held on a Tuesday afternoon, and reported on in the following day’s issue of the Blackwell Morning Tribune. In the issue, several local businesses ran congratulatory ads including Watts Grocery and Gearhard Bros Hardware. The kitchen was furnished and installed by Zahner Mfg. Co out of Kansas City.

Punch was served, and the Blackwell High School Orchestra performed at the event.

The hotel was seen as a necessity to the growing population of Blackwell, which (according to conflicting reports) was somewhere between 9 and 11 thousand during the roaring 20’s thanks to the railroad and oil booms.

The hotel no doubt was an iconic piece of Blackwell history, and anybody who’s anybody will tell you about it’s most famous guest: doomed aviator Amelia Earhat.

Amelia Earhart did, in-fact, stay at the Larkin in January 1937.

On her last flight across the nation on her way to California before beginning her headline-grabbing flight around the world, Earhart landed in Blackwell to fix her airplane. She was staying at the Larkin, which had opened in the 1920’s and was now the central hub of Blackwell.

Earhart had rented a car, and was soon stopped for speeding, a prank set up by her husband George Putnam with Blackwell Police Officer Hiram Ragan.

Putnam was quite the scamp, and the two had an open marriage as to not “restrict work or play” for one another, but that’s neither here nor there.

Earhart was arrested for going over 30 miles over the speed limit, and the judge was called in who proceeded to make Earhart pay a whopping $3.50 in fees and fines. The judge, unlike Officer Ragan, was not in on the joke nor on her identity.

When the Blackwell Mayor arrived, he was mortified to find out Earhart had been treated so harshly, and her money was returned to her. To make amends, a banquet was held that night at the Larkin where Earhart was granted the Key to the City. According to the photo, the key back in the 1930’s was substantially larger than the small golden bottle-opened the City of Blackwell gives out today.

Some 3,000 estimated fans showed up to greet Earhart, who signed autographs for several hours before retiring to her room for the night. She promised them that if they left their books and articles to be signed, she would do it before she left at 5 a.m. the next day.

Six months later, when her plane vanished over the Pacific Ocean, the Blackwell Morning Tribune and Blackwell Daily Journal would chronicle the search for the missing aviator with bold headlines streaking across the front page until the search would soon diminish into a blurb or column here or there.

Blackwell’s famed aviator, the holder of it’s Key to the City, was not even mentioned by the time she was pronounced dead in January of 1939. Her story, much like her body, was swallowed by an ocean of ramping coverage as the outbreak of a second full-on World War loomed.

Earhart wasn’t the only famous guest the Larkin had- actress Katharine Hepburn was alleged to have been a guest at the Larkin, as well as Mae West.

History places Hepburn in Blackwell, Oklahoma in the early 1950’s during her tour of William Shakespeare’s “As You Like It”, but it seems Blackwell might have been anything but “how she liked it”.

Hepburn kept meticulously detailed notes of her life which were all donated to the New York Public Library in 2007.

Among these papers, the Oscar-winning actress and star of “Bringing Up Baby”, “The Philadelphia Story”, and “The African Queen” detailed being stopped in Blackwell for speeding on her way from Tulsa to Wichita.

She was taken by an officer of the Blackwell P.D. to a lawyer’s office in Blackwell where she said “I have been arrested by this moron for speeding! I said I was sorry I did not have a week to take off,” in reference for not being able to find a judge to settle the dispute.

While in the office, she singed her mink coat on a gas stove.

“That coat must have cost you $700,” the lawyer said, to which Hepburn responded “Certainly not. $5,500.” She said she was “ashamed” that she was “cheap enough” to answer him.

She alleged that “If I ever found an Oklahoma car in Connecticut, I would flatten all the tires.”

There are no records online of her actually staying at the Larkin, but it could be assumed that she was housed there as an apology for the ticket situation.

Another famous guest was allegedly Mae West, the sultry vaudeville star of the 1930’s considered to be America’s first sex symbol.

No records available online placed West in Blackwell or Oklahoma, but it is worth noting that legendary western actor Tom Mix attended the premiere of one of his films in Blackwell at the Midwest Theater so, hypothetically, West could have attended one as well.

The hotel, now vacant, is on the national Register of Historic Places.