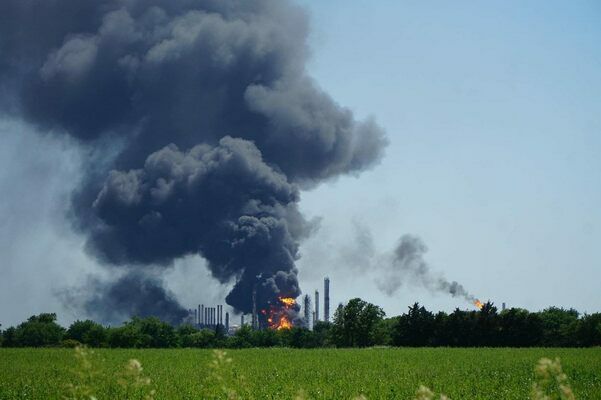 No one was injured or killed when an explosion occurred at a natural gas liquids fractionation facility owned by ONEOK, Inc.

Officials have not yet determined the cause of the explosion, and a repair timeline hasn’t yet been established, said Brad Borror, ONEOK’s communications manager.

The plant remains closed. “Once we complete the damage assessment process and understand where we’re at, then a plan will be put in place to make necessary repairs,” Borror said Monday afternoon. “We’re still just too early in the process.”

Medford residents were evacuated following the explosion, and they were allowed to return Sunday evening.

ONEOK provided hotel accommodations in Enid on Saturday and Sunday nights for displaced residents. After the explosion, westward winds carried a tall, black plume of smoke over farm fields. As flames billowed from the plant, local fire departments staged equipment and crews at a grain elevator on U.S. Highway 81 north of the blaze.

They weren’t able to get near the plant because of extreme heat and risk of explosion, firefighters said. Red Cross volunteers and area churches took water to first responders, and law enforcement officers urged residents within two miles of the plant to evacuate.

The Oklahoma Highway Patrol closed roads going into Medford, including U.S. Highway 81 and State Highway 11, while the fire raged.

Following the explosion, reported shortly after 2 p.m., power was knocked out in the city limits until about 4:30 p.m., Shepherd said. Some residents drove around town to get a glimpse of the blaze. Smoke reached higher than the 150-foot-tall towers at the plant, said Keith McClure, who watched the inferno from about two miles away on County Road 950.

The fire didn’t appear to damage large natural gas storage tanks at the plant, though its effects on processing equipment – tall cylinders and other structures – were evident, McClure said.

“In my opinion, there’s less [equipment] standing than there was,” he said. Cody Darling, who lives north of State Highway 11, was gone at the time of the explosion.

He returned as the flames began to subside later that evening. But the news of the fire spread quickly across the region as the smoke plume grew, he said.

“I have a friend in Alva, about 60 miles away, who said he could see it,” Darling said. MaKesyd Quattlebaum, an employee at a gas station in Medford, was getting ready to go to work when he heard the news of the explosion.

Samantha Munoz was at the station when smoke began rising in the sky.

Unlike some residents, though, she didn’t feel the explosion, which some compared to an earthquake.

“I didn’t feel anything,” she said. “People kept coming in, and they said that something happened. [The plant] was engulfed in flames. “I was confused because people said the whole town was going to explode.”

Grant County Sheriff Scott Sterling said deputies set up roadblocks within a two-mile radius around the gas plant and notified residents about the evacuation advisory. He praised the efforts of first responders who came out to help.

“I’ve had dispatchers that were off duty come in, unannounced, and offer to help,” Sterling said.

“Most all my deputies have come to work as well, even those that weren’t scheduled.” ONEOK operates thousands of miles of natural gas pipelines across the United States.

The Medford facility processed products from multiple pipelines passing through northern Oklahoma. ONEOK handles about 10% of all natural gas in the United States, according to the Natural Gas Intelligence news service.

“All of those facilities are connected via pipeline, so, fortunately, from an operational standpoint, we do have some flexibility in where to move volumes to ensure that operations can proceed as normally as possible,” Borror said.

“We’ve got several options on the table.” No employees have been laid off or furloughed stemming from the explosion, Borror said, and many are working to assess damage.

He thanked employees, community members and first responders for their support and cooperation.

“ONEOK has been operating this facility in the area for decades, and we are blessed to be a part of this community,” Borror said. “That blessing has been paid back in full in times like this.”