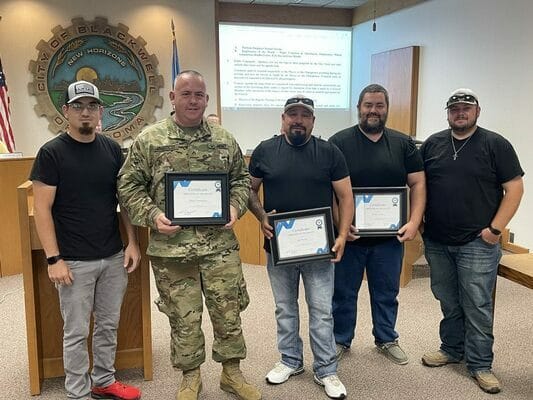 The Blackwell City Council met Thursday night, when the city's water department was honored and changes were made to the controversial Huston Center housing development.

The meeting began with Roman Stevens, the water department’s distribution and collection manager, being honored as a “Patriotic Employer” by Mikael Armantrout, a member of the U.S. Army National Guard.

Armantroutpraised Stevens for being supportive and willing to help him balance his work with the City of Blackwell and his duties with the National Guard. Stevens then recognized his men at the department for their work on a Ferguson Avenue waterline break.

“Our guys are the best,” Stevens said. “I don’t know what we’d be without them.” Other city department leaders gave their reports as well.

Moving onto business, the City Council approved an amendment to the contract between Freedom Homes, LLC, and the City of Blackwell for the Huston housing development. Freedom Homes would build four duplexes instead of the planned five.

The space allotted for the fifth duplex will be used as a playground area. This change was made to placate concerns about the removal of the playground area at the former school.

A meeting in June was heard from residents in the area who were concerned about children not having a place to play.