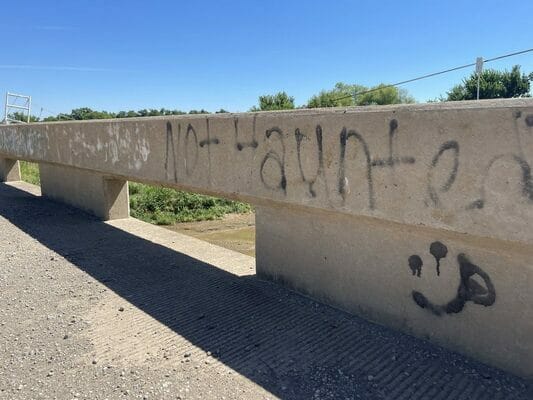 Small towns in America are rife with myth and legend- the older the better.

These sleepy towns across America all swell with stories of wailing women on bridges, ghoulish specters on dusty dirt roads, places one shouldn’t venture after the sun sets.

Anyone growing up in or around Blackwell has probably heard of the Hollopeter Bridge hanging over the Chikaskia River at the Coleman Road bend and P Street.

The bridge itself can seem sinister enough at night- a concrete bridge dangling over the brown-green water of the Chikaskia trickling by, the danging limbs of trees covering its path away. If you didn’t look at the house just beyond the curve, you’d think you were alone out there, in what seems like the middle of nowhere.

In the daylight, however, the Hollopeter Bridge is just a canvas for local artists tagging it with proclamations of love, of hate, or some just making their marks with their names, smiley faces, or...other symbols of various natures.

But one phrase sticks out, eaten away by time and the elements: “Not Haunted”.

The legend, depending on which one you hear, is that once upon a time a young woman drowned there (or hung herself) and the ghost of her father is seen along with her phantom, stalking the bridge at night, looking for his daughter.

Rumors also persist that the grandma of the Hollopeter family can be seen feeding chickens at night. The grandmother nor the father have backstories as tragic as the Hollopeter daughter, or any at all that I’ve found.

Reports of the Hollopeter Hauntings are found on various old websites relating to the supernatural, and anyone with an itch to find ghosts has probably ventured out there with their buddies on a nice, dark night looking for a thrill. I know I have.

In my recent scouring of various tidbits on Blackwell’s history throughout the web, I happened upon a team of paranormal investigators from Wichita calling themselves “Post Mortem Investigators”.

It just so happens this dynamic duo actually investigated Blackwell’s Hollopeter Bridge in the fall of 2020.

Their findings were...cut short, to say the least.

The team, consisting of two men named Jay and Daryl, were actually stopped by a local named Don during their late-night investigation.

“He informed us that no death ever took place on this bridge at all,” Jay tells the camera, “but the little girl did get into a car wreck on the highway not too far from here, and she did pass away.”

They were also informed by Don, the Blackwell crier, that the father never owned a horse.

The two concluded their recording by stepping aside, revealing the words “Not Haunted” spray-painted on the bridge wall.

It’s not hard to see, though, how the myth of the Hollopeter Haunting has endured all these years.

Blackwell is an old town, older than the State of Oklahoma. Ghosts are alleged to live here among us, remnants of a world long since gone.

Several other teams have gone through Blackwell, investigating sites such as the Lipgloss & Sawdust boutique on Main Street, the Equity Plaza Apartments, the Blackwell Public Library, and the basement at the shopping complex where Prairie Smoke BBQ is located.

These locations have all given various credence to their ghostly status in the form of first and second-hand accounts as well as some video footage and EVP recordings.

Surely, someone here has a haunted house or building they wouldn’t mind talking about?

Surely, not all of Blackwell’s ghosts are just stories.