After 57 years, this Braman woman is now a U.S. citizen 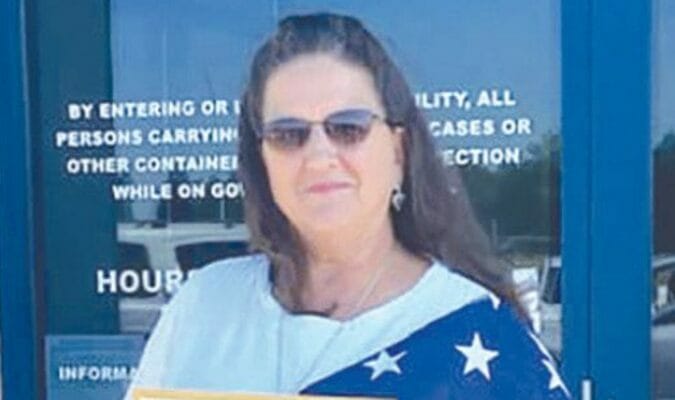 The Braman woman is probably among only a handful of Americans who want to serve in court.

But that’s because she’s finally gained the right to do so. Hampton, a longtime Kay County resident, became aU.S. citizen on July 11 – almost 60 years after she and her family moved from Canada to the United States.

“My parents immigrated here in ‘65,” Hampton said. “I was a baby, so you could call this the great procrastination.”

Hampton’s out-of-the-ordinary path to citizenship started in Blackwell on July 11, 2019, when she began filling out her citizenship application.

Her journey ended exactly three years later in Oklahoma City, when she swore allegiance to the United States.

Her life in America began when her family moved to Ponca City, Oklahoma, from Winnipeg, Manitoba, to racehorses.

Her mother and father, Deryn and H.E. Burling were convinced by Ponca City horse racer Chip Worley that Oklahoma was a great place to race.

Hampton’s mother got her citizenship when Hampton was 18 years old. But at the time, children weren’t automatically granted citizenship status when their parents attained it. Her father encouraged her to seek dual citizenship, but that wasn’t offered, either, she said. Then, life went on. Citizenship took the back seat.

“As a teenager, that’s not on your mind,” she said. “I wasn’t going to do that.” After graduating from Ponca City High School, Hampton remained in the area and started a family. Though she didn’t have citizenship, Hampton felt like any other American, she said.

She had only a few limitations: she wasn’t able to vote, serve on the local school board, purchase a firearm or be a notary (until 1996).

But she was able to have some unique conversations with people about her resident alien status, she said. Most people were surprised to learn she wasn’t a citizen.

“It has afforded me some of the nicest conversations,” Hampton said. “I have talked to people from all kinds of places. They’re like, ‘You carry a green card?’” Hampton worked at the local animal hospital for 24 years, among other jobs, and she became a dispatcher at the Blackwell Police Department in 2018.

He helped her get the citizenship process started. “He goes, ‘Girl, you got to get this done,’” Hampton said. “He sat with me while I did the application and got everything started, sending it in online.”

Mitchell wasn’t Hampton’s only source of encouragement. She credits former President Donald Trump with inspiring her to a be a part of the nation.

She admired his leadership and policies, she said. “I really liked what Trump was doing,” Hampton said. “Trump was a motivator.”

Hampton’s path to citizenship was a long road, but the paper trail was longer. She had to show immigration officials countless legal documents, including family birth and death certificates, and she had to prove she wasn’t affiliated with organizations that could pose harm to the United States.

Then came the real test: the citizenship test. It was something she’d dreaded since high school because history was “not her interest.”

The test has basic questions about the nation’s system of government and its founding.

But other information must be learned at the College of Obscure Knowledge, so to speak.

“There’s other things more specific to dates, such as when was the Constitution written … who was president during each war, what wars were during the 1800s or the 1900s,” Hampton said.

“Some of those are a little more difficult.” Hampton scheduled the test for June 18, 2022.

But two weeks prior, her husband, Tom, died, making an already stressful situation even tougher.

Nevertheless, she pressed on and passed the test – the final milestone. On July 11, she went to Oklahoma City to join 75 other people in a naturalization ceremony.

Afterward, she took some photos near the Oklahoma State Capitol. She then came back to Blackwell to get her Real ID and register to vote.

Hampton said she’s thankful that her family and friends have supported her throughout her journey. She could have gotten her citizenship sooner, but in hindsight, she’s glad she didn’t, she said. “In a way, being so slow has been a blessing to get to meet so many people and be afforded nice conversations and learning things about so many other people,” she said.

The next thing she’ll check off her list is voting. “I feel like my vote will count,” she said. “I feel like a lot of things are not going as well as American people would like them to right now in the United States. … I think we’ve gotten too far from God and too loose with our morals.”

But even more than voting, she hopes to get called for jury duty soon. “Your whole life, they tell you that you can’t do something,” she said. “That’s something you’re interested in doing.”