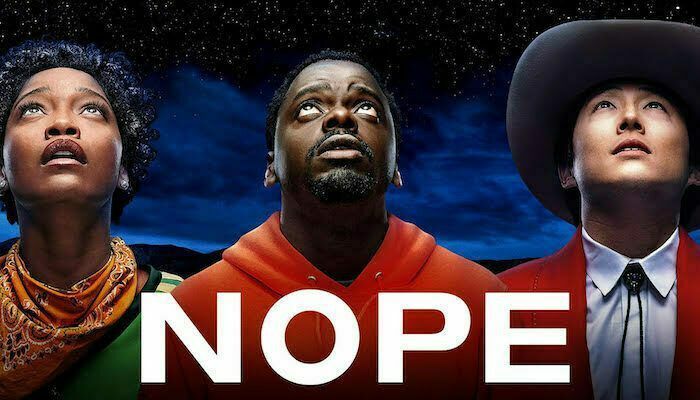 “This dream you’re chasing, where you end up at the top of the mountain, it’s the one you never wake up from.”

Jordan Peele’s NOPE was released in theaters this month and asks the audience- what is a bad miracle?

The film cryptically opens with scripture: “I will cast abominable filth upon you, make you vile, and make you a spectacle” (Nahum 3:6) setting the stage for what’s in store.

Peele’s third directorial feature, following up GET OUT and US, follows two siblings OJ and Emerald Haywood (Daniel Kaluuya and Keke Palmer) who are the inheritors of a Hollywood horse-training dynasty.

Living in an expansive California gulch and sharing land with a former child star Ricky ‘Jupe’ Park (Steven Yeun), mysterious things begin to happen. Random objects fall from the sky, horses go missing, and a mysterious black saucer comes and goes in the cover of the clouds above.

Desperate to record the UFO and to capitalize on it, Emerald and OJ enlist the aide of a millennial tech wiz named Angel (Brandon Perea) and an auteur film director Antlers Holst (Michael Wincott).

But dreams come at a cost. And so do miracles. Especially bad ones.

Peele is noted for his “socially relevant” film-making thanks to his debut GET OUT which followed a black man visiting his white girlfriend’s family, only to realize these creepy liberals are much more terrifying than they seem. In US he took on the slasher genre with a surreal twist. He also produced and spearheaded 2021’s stellar CANDYMAN reboot which I raved about in my review for that film.

Now, NOPE, is much more experimental and comes as the natural evolution of Peele as a filmmaker and writer. And the divisive reaction to it has been evidence of a man who, clearly, did not want to be pigeonholed into whatever box he must have felt threatened by.

Park, also, was the lead on a sitcom titled “Gordy’s Home” which is a subplot that has provoked the most criticism levied against NOPE.

The sitcom, following the antics of a family with a pet chimp, was abruptly canceled after a balloon on set popped, and the chimp playing Gordy went feral, brutally murdering and disfiguring most of the cast during a recording of the episode. Park, a small child at the time, hid underneath the kitchen table set, watching Gordy’s rampage. During this time, he is hyperfocused on a woman’s shoe that came off just feet away from him during the attack- the shoe is left, bloodied, standing upright on it’s toe.

An occurrence so rare and hard to fathom that it would be, for all intents, a miracle.

Gordy notices Ricky and limps over to him, covered in blood. The only thing separating him from Ricky is the dangling tablecloth, a thin veil. In the Bible, there existed a veil in the Holy Temple in Jerusalem that separated man from God, keeping the known and the unknown apart.

Gordy reached a gore-dripped hand up in a fist to simulate the “fist bump” the two actors do on the show. As Ricky reaches a quivering hand out to connect with the chimp, the police storm the set and shoot the monkey in the head splattering the young Ricky in viscera.

When OJ and Emerald visit Ricky Park at Jupiter’s Claim in an attempt to convince the young mogul to buy some of their best horses, Ricky reveals a hidden room full of Gordy’s Home merchandise, including the shoe from the set, encased in glass, still covered in blood from the attack.

Ricky is clearly stricken by PTSD from surviving the attack, but instead of discussing it in any meaningful way, he has capitalized on it and his short-lived career. This folly leads him to attempt to “lasso” or control the UFO object as part of his attraction to disastrous results as he continues, unknowingly or not, the cycle of violence that comes as a result from control of the uncontrollable.

“That’s why they don’t use monkeys on set anymore,” OJ informed Emerald after Ricky recalls the Gordy’s Home incident.

In a flashback, OJ’s father played by Keith David tells OJ, reflecting on a stubborn horse, that “some animals aren’t meant to be tamed”.

On a commercial shoot where OJ and Emerald meet Antlers Holst, OJ is dismissed as “the horse guy” as he attempts to instruct the actors and crew not to do anything to startle the horse.

Of course, an assistant gets too close and the horse kicks back, nearly hitting a crew member. OJ and Emerald are escorted off the set, and a production manager says they’ll use CGI instead- it’s easier to work with. Easier to control.

OJ was not in control of the horse, but he was in an agreement with it. An understanding of man and beast. But he was disregarded for it, for attempting to tell others how to behave in cooperation with the animal.

Hearkening back to the film’s Old Testament opening quote, NOPE is about the vile and abominable of ‘spectacle’. Of bad miracles.

OJ and his sister inherit a horse ranch dynasty and stumble upon a UFO on their property. Ricky yearns to become a star again, inspired by the miracle of the shoe born from the terrifying chimp attack. Hollywood director Antlers Holst is jaded and weathered by his career, and wants to “film the unfilmable” with the UFO.

Angel, fresh from a break up and wasting his life away at a tech appliance store, wants more out of life. He wants to be a part of this miracle in the gulch.

The UFO, at first a basic flying saucer, begins to transform during the film’s climax into a Biblical angel (partially inspired by the biomechanical beasts in the anime Neon Genesis Evangelion).

It transforms from our preconceived notions into something ghastly- terrifying and yet beautiful to behold. Is it an angel? Is it an alien life form? Are they one in the same?

In a final attempt to capture the alien lifeform on film during the climax, Emerald races to Jupiter’s Claim to use an old crank-operated camera in one last-ditch effort as the all-encompassing life form seems ready to envelop everything in it’s wake. We see her struggle and scream to get the right shot, echoing Holst earlier in the movie. She is willing to die for this- for the shot.

To capture and in essence to control the alien. To imprison it onto a Polaroid.

NOPE has a lot to say about the lengths we as a people and culture will go to for film. About our lack of care and grace when it comes to capturing things for our amusement and entertainment.

Perhaps, also, it has a lot to say about Hollywood. About the system that perpetuates hundreds of cookie-cutter CGI superhero movies every year with no regards for what goes into making them.

It can’t be a coincidence that OJ is brushed off as “the horse guy” at the same time that several VFX houses are being bullied and overworked by Disney for not being able to meet the demanding deadlines of their assembly line films.

NOPE isn’t just thought-provoking, though, it is just a great film to watch. Peele exercises great talent when it comes to the shock-horror, as well as building suspense throughout.

His use of music, here, is fantastic including a terrifying rendition of Corey Hart's 1983 song "Sunglasses At Night".

There are some jaw-dropping visuals here as well, thanks to Swiss cinematographer Hoyt van Hoytema who has cut his teeth on a fair share of visually decadent works including TINKER TAILOR SOLDIER SPY, DUNKIRK, and INTERSTELLAR.

The cast is also expertly assembled here, with special note being made of Michael Wincott as the director Antlers. Wincott was a staple in the 1990’s with scene-stealing roles as the antagonist in THE CROW, ALIEN: RESURRECTION, STRANGE DAYS, and ALONG CAME A SPIDER. It’s great to see him in a major motion picture again, and I absolutely delighted in seeing his subdued but still interesting turn here.

Daniel Kaluuya, Peele’s muse and star of GET OUT as well as WIDOWS, BLACK PANTHER, and JUDAS AND THE BLACK MESSIAH is a figure of little words here, but his actions speak volumes and his screen presence is second to none.

Yeun, playing Ricky Park, is a breakout of AMC’s awful “The Walking Dead” and was catapulted to fame with last year’s Oscar darling MINARI. His eyes tell of tragedy, and his character teeters on the edge of sympathetic and revolting.

Keke Palmer, famous for her role in the TV comedy “Scream Queens” as well as Showtime’s “Masters of Sex” is loud, funny, and a stand-out here. Behind her comedy lies the film’s biggest showcase of loss and a hope for redemption.

NOPE is one of the year’s best, and a true big screen miracle in it’s own right. Universal banked big on Peele’s name brand and delivered a director’s vision to it’s fullest, a rarity in today’s market, but a welcome one.

NOPE is now playing in Ark City and Stillwater.

Combating Loneliness in Seniors with Alzheimer'...