Greenfield Guilty: Inside the Blackwell Mayor's charges, sentence, and future 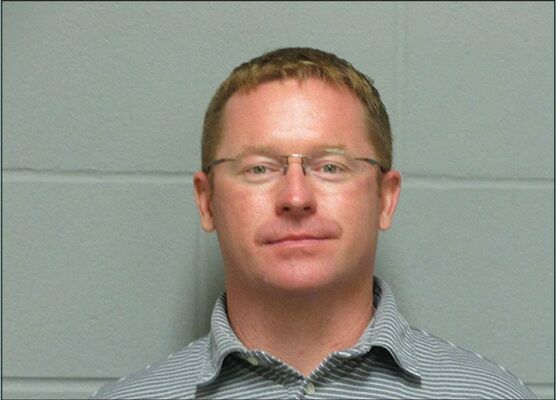 Former Blackwell Mayor T.J. Greenfield pled guilty to five felony charges stemming from illegal financial transactions between his former concrete company and the City of Blackwell, bringing to an end more than three years of political turmoil in the city.

Greenfield made his pleas in Kay County District Court on Thursday.

He received a seven-year deferred sentence and will have to pay for 18 months of supervision by the Kay County District Attorney’s Office.

As part of a plea agreement, he is required to pay restitution to the City of Blackwell, and he can never again hold public office.

He resigned Friday as part of the agreement and will have to pay court costs.

In a small courtroom in Newkirk, Greenfield stood before Special Judge David Wilkie and waived his right to a preliminary hearing.

As Wilkie read each of the five charges, Greenfield softly replied: “Guilty.”

His attorney, Eddie Wyant, stood beside him. The news comes more than three years after The Journal-Tribune began investigating allegations that Greenfield’s former company, G&C Concrete, sold materials to the city in violation of state law and the Oklahoma Constitution.

What followed were numerous heated City Council meetings, the appointment of a special investigator, the firing of a city manager, an investigative audit by the Oklahoma Auditor & Inspector’s Office and, ultimately, Greenfield’s conviction.

The central piece of evidence in the case – a lengthy 2021 report by the state auditor’s office – confirmed that the City of Blackwell paid G&C Concrete $129,489.50 for services and materials, including concrete and rock, between April 2015 and April 2018.

During that time, Greenfield served as a City Council member or mayor and voted to approve the purchases, which violated the Oklahoma Constitution, Article 11.

The Constitution bans municipal officials from receiving “any interest, profit, or perquisites arising from the use or loan of public funds.” Payments to G&C were made with credit cards, which the Council approved as part of the consent agenda at city meetings. Consent agendas generally list only credit card balances, not the contents of their purchases, leaving the payments hidden from public view.

“From June 2016 through April 2018, Greenfield co-signed the credit card payment checks and was aware the credit card purchases were not being presented to the Council for approval,” state investigators wrote in their audit report.

“Other council members stated they were not aware the City was conducting business via credit card with G&C Concrete.”

Investigators and prosecutors also honed in on a so-called “straw purchase” involving the City of Blackwell and the City of Tonkawa after Greenfield’s business closed in 2018.

At a public auction of G&C’s assets, the City of Tonkawa purchased concrete blocks and a snow plow blade, then declared the items surplus and sold them to the City of Blackwell days later.

Blackwell city workers picked the items up directly from G&C Concrete – facts which were confirmed during court testimony.

Four years have passed since the allegations that led to Greenfield’s conviction were first leveled against him.

In 2018, the city laid off almost a dozen employees because of what officials called an “unexpected shift” in finances.

When the Blackwell Police Department was told it would have to terminate officers’ employment, the Fraternal Order of Police made an extensive open records request that centered on business dealings between G&C Concrete and the city.

Other Council members didn’t receive information about it for months.

Outhier abruptly resigned in late 2018, and the Council voted to hire Janet Smith as city manager in January 2019.

Mere weeks after she was hired, the Council called a special meeting to discuss her employment in an executive session, according to the meeting agenda.

Smith claimed that Greenfield and Council member Jon Webb were trying to fire her because she’d uncovered the transactions between Greenfield and the city.

Greenfield and Webb denied the claim.

Dozens of city employees were present in the Council chambers during the meeting, and they applauded as Smith entered the room.

Council members Steve Marquardt, Richard Braden and Tom Beliel voted against entering the executive session, while Greenfield and Webb voted for it.

For months, the 3 – 2 “split” persisted among the Council on items related to the investigation.

Soon, the dispute turned into a perceived power struggle between Greenfield and Smith. Social media chat groups and community forum pages were filled with fiery debates, and City Council meetings were characterized by colorful exchanges of barbs between spectators and city officials.

In April 2019, one month after other Council members were given the report from Love’s investigation, the Council voted to hire Oklahoma municipal judge Stephen Haynes to conduct a special investigation.

Haynes researched the transactions between G&C and the city, finding that Greenfield likely violated Title 11, Section 8 of the Oklahoma State Statutes.

The law prohibits officials from doing business with the cities they serve in most cases, though some exceptions are granted for towns with populations of 5,000 or fewer residents.

Haynes’ investigative findings were turned over to the state auditor’s office in late 2019, and the office released the report detailing its findings in June 2021 – roughly two months after the Council fired Smith as city manager.

Greenfield, Outhier and Henderson were charged in the following months.

Greenfield’s time in court Thursday was swift, and he was not called to testify.

Proceedings focused mostly on Outhier, who was scheduled for a preliminary hearing. Kay County District Attorney Brian Hermanson alleged that Outhier and Henderson knowingly conspired to purchase the snow plow blade and blocks in violation of the law.

Henderson said Outhier asked him to do a favor by purchasing the concrete blocks and snow plow from the auction.

Outhier allegedly told Henderson that Blackwell could not purchase the blocks and plow, but didn’t say why. Henderson said he later learned the city couldn’t buy the items because Greenfield was an owner of G&C. Henneke said Outhier and Henderson had no personal financial interests in the transaction, and he asked for Outhier’s charges to be dismissed.

Hermanson rejoindered, saying the evidence was clear that Outhier and Henderson conspired to make the purchase.

Part of Henneke’s case also centered on legal advice Henderson and Outhier obtained from Kennedy, who serves as city attorney for the cities of Blackwell and Tonkawa.

Henderson testified that Kennedy advised him and Outhier that the transaction between Tonkawa and Blackwell was legal.

Kennedy spoke to The Journal-Tribune by phone Friday, saying he believed the purchase was permissible under Title 11 of the Oklahoma State Statutes.

However, the Oklahoma Constitution prohibits such purchases.

Kennedy said he followed the state law, which he has taught at courses hosted by the Oklahoma Municipal League for public officials across the state.

“Well, I hadn’t considered the Constitution, and I would tell you that neither has any city manager, city attorney, the state Legislature, the [Oklahoma Municipal League],” Kennedy said.

Mick Dodson, an attorney with the state auditor’s office who interviewed Kennedy as part of his investigation, testified in court that Kennedy said the purchase was legal, though his reasoning was hard to understand.

“Frankly, it was kind of difficult to determine what Mr. Kennedy was saying he believed,” Dodson said.

Kennedy said he was unaware that the items Tonkawa purchased never left the auction site.

Kennedy confirmed that he has been interviewed by the Oklahoma State Bureau of Investigation in connection with the case.

He was served a subpoena but was not called to testify in court Thursday.

Greenfield declined to comment to The JournalTribune after his plea Thursday.

At his request, The Journal-Tribune emailed him a series of questions which he said he would answer, though he did not respond to them.

In his resignation letter, Greenfield said serving as mayor has been an honor.

“My time spent serving the citizens and helping the City of Blackwell grow and overcome numerous obstacles is the most satisfying and personally fulfilling period of growth I’ve ever had,” Greenfield wrote.

“I love this city! I’m more than confident the City staff, the current City Manager and current CityCouncil [sic] members will continue making great strides in our community in the near future!”

He said he will continue to be involved in the community “where I can, it will just be in a different capacity from now on.”

Filling the mayor’s seat will be the decision of the Council, which meets Thursday night. The amount of Greenfield’s restitution will be determined by the City of Blackwell, City ManagerJerry Wieland said. Marquardt, a supporter of the investigation, said he’s grateful that the truth has prevailed.

“The No. 1 thing I want the community to know: The truth will always win out, no matter what,” Marquardt said.

“The second thing is: Make sure that you investigate both sides of the story. And the last thing is that, as long as you follow the truth, you will always be vindicated.”

He said he hopes “that the community goes in and starts getting more involved in how the charter, and this community, work, so they can become educated in everything and how everything can get fixed in this city by educating themselves. If they do that, they’re going to finally get the right people in these positions.