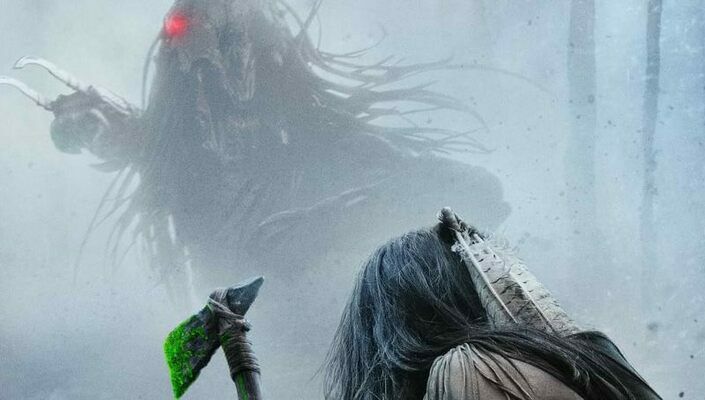 “I don’t know that this thing can be killed.”

20th Century Studios and Disney’s Predator origin story PREY dropped this weekend on Hulu, setting the clock back on the Predator franchise some 300 years in the past, dropping the intergalactic hunter into the Great Plains to face off against a Comanche hunter in a deadly game of cat and mouse.

The film, directed by Dan Trachtenberg (10 CLOVERFIELD LANE) and written by Trachtenberg and Patrick Aison (Amazon’s Jack Ryan) attempts to reset the Predator mythos from 2018’s lackluster Shane Black entry THE PREDATOR and the result works more often than it stumbles.

The year is 1719 in the northern Great Plains and Comanche warrior Naru (Amber Midthunder) is eager to undergo her ritual to become a fully blooded member of her tribe. In the sky, she sees fire and light, thinking it is the mythical Thunderbird coming as an omen. In reality, it is the alien ship carrying a member of the Yautja, a Predator, arriving for the first time on Earth for a hunter’s test of it’s own.

When animals are mutilated around her, Naru quickly realizes that there is a monster stalking them.

No one in the tribe believes her, so Naru and her canine companion begin the hunt of their lives to prove herself to the tribe and to save her way of life.

She hunts to live. The Predator lives to hunt. And now, their battle begins.

PREY certainly doesn’t have the characterization that made the original PREDATOR a classic or that made the 2010 PREDATORS a rollicking good time, but what it lacks in characters it makes up for in mostly inventive action scenes and fantastic direction.

We follow Naru through lush fields, thick woods, beautiful streams, and into the heart of a French fur-trapper camp. We see her learn what the Predator hunts like- what it sees, what it doesn’t. We see her assess the creature’s strengths and weaknesses.

While the Predator is a film about the masculine and it’s sister franchise, Alien, is very much a film about the feminine (both allegorically and literally) director Trachtenberg does away with male / female dynamics and attempts, instead, to contextualize The Predator in a colonization point of view.

The Predator comes from deep space, belonging to a tribe that values the thrill and the morality of a hunt. The Predator doesn’t attack prey that is not equal to it. It kills for purpose, not for fun.

This is contrasted in the film against the French fur-traders that leave an entire field of buffalo dead and rotting, taking their furs and leaving their carcasses. The Predator happens upon this sight, and we sense, almost, that it is disgusted by this act. A few beats later, and The Predator seems to intervene when Naru is captured by her own tribe wishing to take her back to camp, and they assault her.

The Predator intervenes because these men- her tribe- are a threat. But perhaps it also intervenes because they are a danger to Naru, making this Predator a sort of protector, in a way. It is interesting to note that in Predator lore, the Yautja are not a patriarchal species and the male and females hunt together with the females, in some cases, being bigger and more fierce hunters compared to their male counterparts.

The Predator, chasing Naru, stops when she is caught in a French bear trap, and it was neat to see the creature quizzically examine the trap, and even more exciting to see what follows, especially the scene where the Predator massacres the French hunters, dispatching them in variously violent and (excuse my ‘French’) bad ass ways.

This Predator is a young and reckless hunter, more focused on showmanship that concealment, which plays into how it fights and presents itself compared to the Predators seen in the Schwarzenegger original, PREDATOR 2, PREDATORS, and the two ALIEN VS. PREDATOR installments.

PREY is not quite a masterpiece, and it leaves a bit to be desired with some themes that are not quite as well-rounded as I feel the intent was, but it is a fun film and a welcome return to form for the franchise.

I think the film missed the chance to work in Comanche mythology and Indigenous superstition in a more meaningful way with The Predator itself, outside a few passing references here and there. The colonization allegory, as well, could have been expanded a bit more but this was an action film not a thesis paper, so I really cannot be too upset by that because the film did serve its purpose.

It is, perhaps in a more meta presentation, Disney’s “Look, we can do this,” showcase in the wake of their acquisition of 20th Century Fox and adoption of the Alien and Predator franchises. Disney has recently began to publish Alien and Predator comic books under their Marvel banner, and the former are very good while the latter releases August 10.

PREY was a fun time, and it is a shame that Disney didn’t give it a theatrical release. I have no doubt it would have been a good-sized hit for them, especially going into the barren end-of-summer wasteland for theatrical releases. The film was only released on Hulu due to a grandfathered deal on Fox’s part (pre-aquisition) that would see all their theatrical movies given a release on WB’s HBO Max.

There’s a fun little easter egg in the credits as well, if any eagle-eyed fans had questions about a certain flintlock pistol that ties into PREDATOR 2…

...So, to restate, while not an artful masterpiece, PREY exists to prove that under the right vision, this monster is far from being extinct and there is still a bright (and bloody) future ahead.