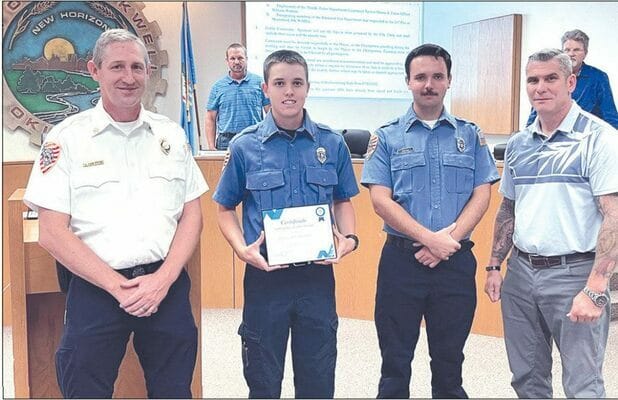 The Blackwell City Council met Thursday to appoint the city’s interim mayor and vice mayor in the wake of former Mayor T.J. Greenfield’s resignation. The meeting began with City Manager Jerry Wieland recognizing the Blackwell Fire Department for assisting in the Mooreland wildfire.

He also recognized Blackwell police officers for their “outstanding efforts” on a high-stress call. Moving onto department reports, Fire Chief Cory Hanebrink detailed the efforts in Mooreland and praised the work of his department and the Kay County Task Force.

Blackwell Public Library Director of Operations Talyn Spence spoke to the Council and recapped a busy July, noting that traffic has not slowed at the library.

It has been busy with ongoing events and the summer food program. Following department head reports, the first order of business was to appoint Vice Mayor Jon Webb as mayor.

Webb was vice mayor under Greenfield, and he will fill the mayoral position until the next election in April.

Council member Robert Husted was appointed as vice mayor. The Council will appoint a Blackwell resident to fill the vacant Ward No. 2 seat, occupied by Webb, at its next meeting.

Thursday’s meeting, which wrapped up just before 6:30 p.m., ended with Wieland announcing that he had been in talks with a semi-pro baseball team from Kansas that is interested in hosting its summer league in Blackwell at Morgan Field. Wieland said more information will be coming soon,but he is hopeful and excited about the opportunity it will give Blackwell.