EVENT HORIZON at 25: Hell in space is still unmatched to this day 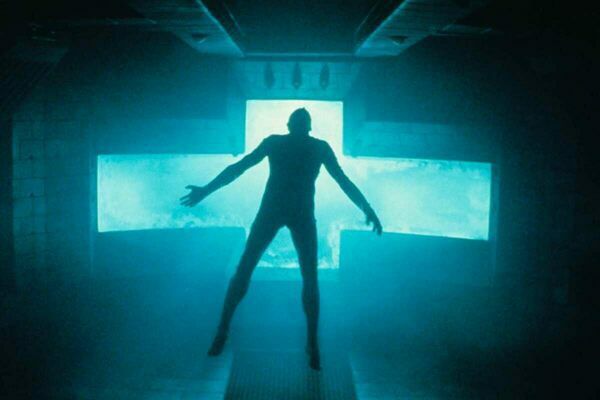 “Hell is only a word. The reality is much, much worse.”

1997 was a hell of a year for film with some juggernaut hits like TITANIC and AIR FORCE ONE but especially science-fiction.

Many of those remain to this day as solid classics and benchmarks of their genres- some were sci-fi comedy, some drama, but in that mix was EVENT HORIZON, a film that weaponized actor Sam Neill’s appeal as the first JURASSIC PARK’s leading man Dr. Grant and a film which was reviled upon release as a box office bomb but, one that would become a staple of horror in the years to come.

EVENT HORIZON begins with the crew of a rescue ship in the year 2047, The Lewis & Clark, manned by a cast of familiar faces including Laurence Fishburne, Sam Neill, Kathleen Quinlan, Sean Pertwee, and Jason Isaacs.

Anderson admits that the casting of Neill, who had become “America’s hero” after 1993’s JURASSIC PARK, was very much intentional as he becomes, in a sense, the film’s reviled antagonist which would take the audience by surprise.

The Lewis & Clark receives a distress call from the starship The Event Horizon which vanished 7 years prior on it’s maiden voyage around Neptune to test out a new gravity drive that folds space and time to travel in record speed.

Upon boarding the Event Horizon, the crew of the Lewis & Clark begin to realize that not everything is as it seems and that the new technology brought back some horrifying results.

While other notable sci-fi classics like 2001 and ALIEN had the guiding hand of NASA engineers and renowned horror artist H.R. Geiger to influence their designs, Anderson opted for a more classical approach to craft something that audiences had never seen before.

He crafted the look of EVENT HORIZON’s universe from Christian theological imagery, the art of Hieronymus Bosch and Pieter Bruegel, as well as the Nore Dame Cathedral. The result set itself worlds apart from the industrial and sexualized imagery of Ridley Scott’s ALIEN which, of course, EVENT HORIZON was apt to draw comparisons to: doomed crew in space uncovering a grizzly secret.

Paramount, who distributed the film, needed a summer hit after the production-plagued and over-budget TITANIC (which they co-financed with 20th Fox) had to move to December to accommodate reshoots. The studio cut Anderson’s post-production time in half to fill their empty summer slot, and in doing so were horrified after test screenings resulted in walk-outs and audience terror.

Paramount thought they had an “adult Star Trek” with EVENT HORIZON, and seemingly had no idea that Anderson was crafting a gothic horror bloodbath. The studio forced Anderson to cut a majority of the film’s more graphic scenes, and the film was released with a dud.

Now, the film is being adapted into a TV series from Amazon Prime (under the guidance of horror-hotshot Adam Wingard) and outside of that, this once-flop’s influence is still felt to this day.

Videogames like EA’s “Dead Space” borrowed heavily if not exclusively from EVENT HORIZON and recent films like Netflix’s THE CLOVERFIELD PARADOX and PANDORUM (which Anderson produced) owe their life to EVENT HORIZON as well.

It’s hard to imagine, even, that Netflix’s “Stranger Things” would have a life if it weren’t for EVENT HORIZON with their shared focus on hellish dimensions and the horrors that await those inside.

Anderson broke onto the scene with the indie film SHOPPING starring Sean Bean before helming the acclaimed 1995 MORTAL KOMBAT just years prior, making him a hot item in Hollywood.

Following EVENT HORIZON he would go on to helm 1998’s SOLDIER with Kurt Russell and then 2002’s RESIDENT EVIL, kickstarting a billion dollar franchise as well as 2004’s AVP: Alien vs. Predator.

From 2008-2011 he had a “Hell” of a run with the remake of DEATH RACE starring Jason Statham, the aforementioned PANDORUM, and THE THREE MUSKETEERS.

Even today, in the landscape of horror, EVENT HORIZON is still leagues beyond most what even state-of-the-art CGI and brand-name directors can even hope to accomplish.

Every frame of EVENT HORIZON was dripping and oozing (literally) with immaculate practical effects that today’s reliance on computer imagery can’t match in the slightest. Recent horror pictures, even the good ones like PREY, are eye-sores with digital blood spurts and green screen dismemberment that don’t carry the same weight and grit of good old-fashioned prosthetics and blood squibs.

What are your thoughts on the film?