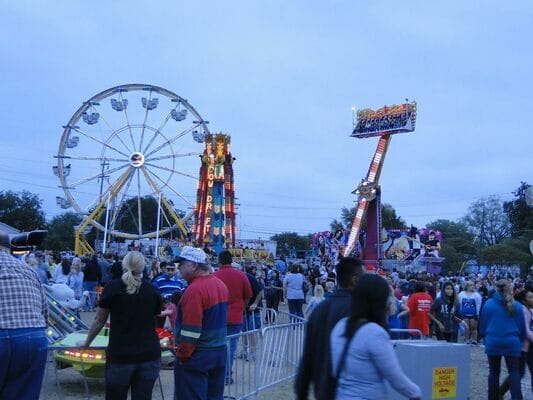 Blackwell is preparing for the 105th annual Kay County Free Fair, set for Sept. 13 through 18.

And while Kay County Fair Board members have no doubt that thousands of people will turn out nightly for the festivities, they are a bit more skeptical that people will show up to help.

On Aug. 1, officials posted on the fair’s Facebook page that they are seeking volunteer help for setting up and tearing down the expansive fair.

Fair board member Scott Overman said preparing for and cleaning up after the fair is something that he and the current board members and volunteers are struggling with as time goes on.

“Help is something that everyone wants to do until they’re asked to do it,” Overman “We’re all getting older, and it gets more and more difficult every year to set up and tear down the fair. “There’s a lot that goes into it that people might not think of when the time comes. We have to get out and set up the livestock pens in the pavilion, set up over 150 tables and hundreds of chairs in the Event Center, roll out bleachers, prepare tables around the grounds, set up boards and trailers, prepare trash cans – it’s a lot of work.”

The board works with the Kay County Detention Center’s supervised trustees, and Overman estimates that about 20 people help with the fair.

“Best case scenario is that we would want 10 volunteers,” Overman said. “I think it would be a great opportunity for high school students seeking community service hours. We called out for volunteers in the past, and I think one year, only one showed up – a high school kid. And he worked harder than almost anyone else I’d seen out there."

“We’re not paid to be at the fair,” Overman said of the fair board. “This isn’t a full-time thing for the members. We all have jobs. We all have families. To work the fair – to be there every day – requires some of us to either vacation out of work or outright miss it entirely. So, the more help we could get, the better.”

“And if you don’t volunteer but you see someone doing that, all we ask is that you thank them,” Overman said. “Because without that work and dedication, this fair wouldn’t be happening.”

The fair is chugging fullsteam ahead for this year.

“We are currently partnered with Weee Entertainment, in the wake of Ottaway Amusement’s retirement,” Overman said. “They have purchased a lot of rides and equipment from Ottaway, so guests can look forward to seeing some classic attractions along with a slew of new rides and offerings. They have a lot more kids’ rides, family-friendly rides and, of course, plenty for grown-ups.”

The fair is slated to have as many as 17 rides, including kid-friendly fare such as “Kiddie Cars,” the “Bear Affair,” “Tractors” and the “Super Slide,” as well as the classic Ferris Wheel, “Freak Out” and “Downdraft.” Other rides include the “Rockstar,” “Sizzler” and “Tilt-A-Whirl.”

“Fair week is a special time for communities, and Weee Entertainment is excited to keep the tradition of bringing quality family entertainment to the Kay County Free Fair,” the organization said.

“We want to make sure people are getting the most bang for their buck when it comes to the wristbands,” Overman said.

“We will have the Ponca City FFA’s petting zoo back as well, with around 15 animals.”

In addition to the petting zoo and rides, the fair will host live music performed by Bailey Rae, Jenna Hallman and the Morgan Reynolds Band.

“We’re bringing back a lot of stuff that people have been missing and asking for,” Overman said. While exact numbers are almost impossible to keep track of, Overman broke down attendance for the fair based on ticket sales.

“There’s about 3,000 to 4,000 tickets sold per night through Friday, with about 5,000 to 7,000 tickets sold on Saturday night, and that’s not counting walk-up traffic – people who just show up to eat or to walk around and look at the exhibits,” Overman said. “That’s huge. The fair is a crucial part of Kay County, and it is something we pour our heart and souls into every year.”

In 2020, the fair was canceled for the first time in more than 100 years because of the pandemic.

Overman said that year hurt, but officials are hopeful that this year will be a return to form for the annual event.

“Obviously, everyone felt losses that year,” he said. “It was hard to rebound from that, and we got a lot of pushback for it. But we’re looking forward to coming back this year better than ever.”