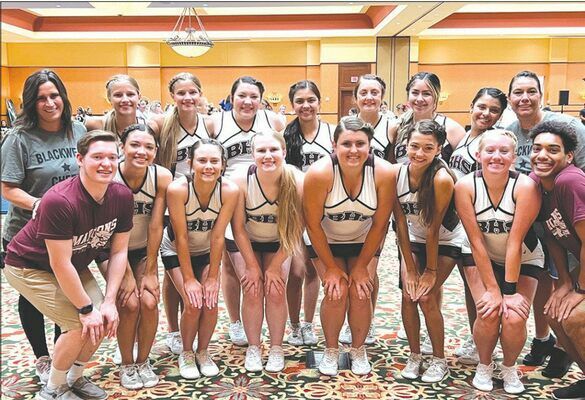 Blackwell Public Schools cheerleading coach Annilyn Young is ready for her girls to show the world what they can do.

The 27 girls across Blackwell’s middle and high school cheer teams have worked all summer not only to become better cheerleaders, but better people as well. Blackwell cheerleaders have been working hard through the summer, Young said. Each girl is responsible for raising funds for cheer camp costs, clothing, shoes, bags and poms.

“We start selling that in the spring right after tryouts. Other group fundraisers, such as our all-sports calendar, fair parking and 50/50 raffle, help pay for uniforms, signs, megaphones, travel expenses and other costs.” But summer wasn’t just the start of Blackwell’s cheer season.

“We begin practicing in the spring, and we practice all summer long,” Young said.

“They practice a minimum of three days a week. Most of those practices begin at 6:45 [a.m.] so we can work around work schedules. When school starts, they will practice five days a week. Our regional competition is Sept. 17, just four weeks after school starts. The girls also have over 50 cheers and 10 dances they must learn before the first football game. “We haven’t competed the last two years due to the pandemic. This group is excited to start competing again. We have a lot of first-year cheerleaders, but they are willing to put in the extra work it takes to get where they need to be. I have missed coaching competitively, and I can’t wait to see what this group can accomplish come September.”

Blackwell has a history of successful cheer squads. They were state champions in 2000 and have placed in the Top 10 since 2010. In 2014, they were state runner-up. And in 2016, Blackwell cheer was crowned regional champions.

“One of my former Blackwell cheerleaders, Colby Redford, and his teammate, Ami Carrasquillo, who are currently cheering at Dodge City Community College, have been assisting me since early summer,” Young said.

“They attended camp with us in June, where they really challenged the girls. The girls left camp with new-found confidence and new skills they never thought they would be able to do. “Cheerleading is just like any other team sport in the fact that it teaches self-discipline, sportsmanship and mental toughness. It also teaches confidence and leadership. It’s not easy to get in front of a crowd of your peers, parents and strangers and perform with a smile on your face. No matter if your team is winning or losing, you must stay positive and upbeat.”

Young cheered throughout high school in Blackwell. She also worked at the local cheer gym and helped coach a few small schools in the area. She coached in Owasso for 10 years before moving back to Blackwell to begin coaching in 2010. Young works closely with Pam McCleary, her cheer sponsor, through the season.