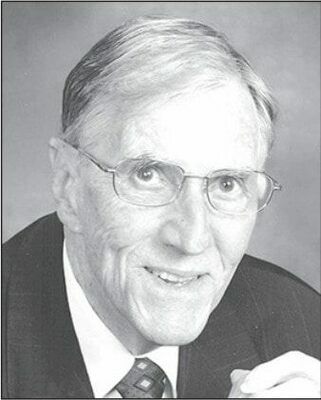 He was born September 30, 1927 in Kansas City, Missouri moving to Blackwell, OK at 6 weeks of age after being adopted by E.L. and Lucy Estes. His sister, Betty Estes (Drake),

joined the family 2 years later. He attended Blackwell schools graduating in 1945 from Oklahoma Military Academy. After serving in the US Army for 18 months, he returned

to Blackwell and worked in the family business, Estes Furniture Company, for 40 years until it closed in 1987.

He enjoyed working as a deputy assessor in the Kay County Assessor’s office from 1965 to 1979 and diligently served on the Kay County Excise and Equalization Boards from 1985 until his death. He especially enjoyed his 32 years as a volunteer firefighter for the Blackwell Fire Department. He also enjoyed being a Grant County wheat farmer.

He was a life-long member of the First Christian Church where he faithfully served in several capacities.

JC was very social and derived much pleasure enjoying daily coffee or ice cream sessions with his friends.

The family will receive friends during a visitation from 5:00 - 7:00 p.m. on Friday evening, August 26th at Roberts and Son Funeral Home Services will be held at 1:00 p.m. on Saturday, August 27, 2022, at Blackwell First Christian Church with Pastor Jeff Koch officiating. Burial will follow in Blackwell Cemetery.

A memorial has been established in J.C’s honor with the Blackwell First Christian Church, sent in c/o Roberts and Son Funeral Home, 120 W. Padon, Blackwell, Oklahoma 74631. On-line condolences can be made at www.robertsandsonfh@yahoo.com.