It's A Small World: "Never go anywhere in a speedo and a shark-tooth necklace" 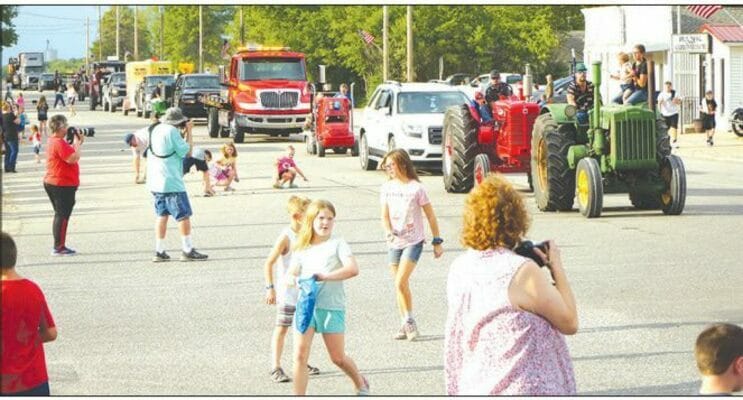 My father has often given me bits of wisdom: Treat others kindly, work hard and be honest.

He’s also given me other useful life tips like this: Never go anywhere in a Speedo and a shark-tooth necklace, because you’re bound to see someone you know.

Some days, that advice seems more practical and prophetic than others. Not that I’ve donned such an outfit (or complete lack thereof), and not that I’ve actually seen anyone else do it in real life (thank goodness). I should also add that my dad does not know this lesson from experience; he heard it and choose to believe it.

I’m pretty sure, anyway. The point I’m making is that, yes, the world is much, much smaller than we realize – and we’re always seemingly under the watchful eye of an acquaintance. My adventures over the weekend put this lesson back in focus. I go to college in Alva, and one of my best college buddies, Braylon Bradt, operates a mobile sound business.

He DJs live events and bands under the Boss Music brand. A few weeks ago, he told me he would be setting up equipment for a performance in some little town in Kansas called South Haven. Of course, that name hit home with me. Being from Blackwell, I’ve spent a lot of time in the tiny Sumner County town just a half-hour north of my hometown.

The band was set to play during the 106th annual South Haven Community Fair. Braylon also needed a place to stay overnight so we could make a trip to Tulsa the next day. I offered up my family’s place for the night and agreed to help with the event, partly because I could also take pictures for The Blackwell Journal-Tribune while I was at the fair. Killing two birds with one stone, to use the old cliché.

For a town that can’t be much more than a square mile in size, South Haven’s fair is tremendous. It had plenty of rides and lots of tasty, home-cooked food sold by high school students as part of a fundraising project. South Haven has a population of 324, yet it easily puts on one of the best parades in this part of the country, filled with nearly 40 minutes’ worth of cars, trucks, tractors, floats, motorcycles and horses.

The fair and parade were also filled with lots of people – lots of people I knew and hadn’t seen in a long, long time. I’d better not start naming anyone because I’d leave some out inadvertently, but believe me when I say I ran across several old friends, local business owners and other Blackwell-area community members.

I had forgotten most of their names, but at least we recognized each other. Mostly. A bunch of them know me from the newspaper, where my mugshot is printed each week with this column – not the police blotter. I suppose I’d rather know people thanks to fame rather than infamy. On Sunday, Braylon and I trekked to Tulsa, talking most of the way about cars and trucks and listening to podcasts … about cars and trucks. We’re pretty exciting, obviously.

We had to drop off sound equipment at a tent revival his folks are helping with. The job took most of the day, but by evening, we were back on the turnpike – Highway 412 – heading back to Highway 177, which would lead us to Blackwell.

We stopped at the Kum & Go, the oasis-style truckstop in the middle of the turnpike, for drinks and snacks. And lo and behold, as we walked out of the truck stop, we ran into a fellow Alva resident: our good friend Jaylyn Graybill.

The encounter shocked us all, so I guess it’s good we weren’t driving electric cars. To top it all off, as we were standing outside the truck stop yackin’ like the hillbillies we is (did you catch that?), someone grabbed my shoulder. It was a Blackwell farmer I’ve known for years. He was heading back to Blackwell from a trip to Arkansas.

After a weekend of fun encounters and trips down Memory Lane, all I can think about is the Disney song “It’s A Small World.” It surely is.

But even though the world is so tiny, it’s still not big enough that I can wear a Speedo and a shark-tooth necklace in public. Because doggone it, for better or worse, I run into people I know just about everywhere.

Of course, maybe that’s a good thing for all of us. I don’t plan to test Dad’s wisdom out anytime soon. I’ll just rest in the belief that it’s always better to be wellknown than well-seen.