HOUSE OF THE DRAGON's third episode is rife with symbolism - and it's the best yet. 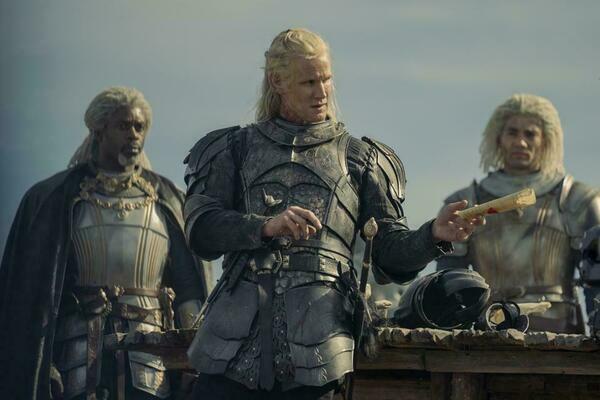 Week 3 of HBO’s “House of the Dragon” aired Sunday night in an episode that excelled in the quieter, more contemplative, scenes while still executing the large-scale war that fans of “Game of Thrones” have come to expect.

We have jumped forward in time 3 years since episode 2 on the second birthday of King Viserys and Alicent Hightower’s first-born son Aegon II Targaryen. We are years now into the Iraq War parallel of the battle in the Stepstone Islands with the Crab Feeder pirate king...and King Viserys is going hunting to commemorate his son’s big day.

The hunting party, of course, isn’t just drinking and merriment.

Along for the ride is Rhaenyra, Viserys’ daughter and former childhood friend of Alicent.

Rhaenyra was named as Viserys’ successor in light of him having no male heir at the time. With the lords of Westeros having already sworn themselves to Rhaenyra, controversy arises now that Viserys has an obvious male heir of succession.

Despite this, the queen-in-waiting Rhaenyra is now pressured to marry, being a beautiful 18-year-old girl who will one day become the most powerful woman in the kingdom.

Fans of “Game of Thrones” may remember fondly the early days of seasons 1-3 where HBO didn’t afford the fantasy series with a budget the size enough to fund a small country.

In these days, the story was told in a more “tell, don’t show” style, forcing the writers to flesh out the story with scenes of fantastic dialogue that gave us some of the adaptation’s best moments of the entire series with characters such as the late Robert Baratheon, Cersei and Jaime Lannister, Eddard Stark, and others.

I bring that up, because Episode 3”Second of His Name” felt very much like an early episode of the former series.

The hunting camp allowed us some fantastic time with Paddy Considine’s Viserys allowing the actor to really flesh out the character who, will given moments in episodes 1 and 2 to shine, really burns fantastically bright here in his own sorrow, insecurities, and general unhappiness being king and having the weight of the world on his aging shoulders.

Viserys aims to slay a magnificent white stag to honor his son. The white hart was a symbol of nobility and prosperity, we are told, before the dragons ruled Westeros.

“Even I do not exist above duty and tradition!” Viserys screams to Rhaenyra, after she is upset by an offer of marriage from Jason Lannister of Casterly Rock. Soon after this explosive argument, Rhaenyra escapes on horseback into the woods, pursued by Ser Cristole Cole of the Kinsguard, a smoldering and handsome Dornish knight.

Cole and Rhaenyra mirror a fairy-tale romance: the rebellious princess and the handsome dutiful knight. The two make small-talk that is both flirtatious and necessary for what is to come in their lives, waxing philosophical about marriage, duty, and necessity around a fire before they’re interrupted by a wild boar which Rhaenyra massacres after Criston helps it off of her.

It’s a guttural, pent-up, rage that has been simmering inside the young girl for years now, finally boiling up to the surface. Covered in blood, she pants. As King Viserys reminded her before in the episode, she is “of age” now- and as we saw, has now been “blooded”.

Back at camp King Viserys laments, drunkely, to Alicent that he fears he chose wrong when naming Rhaenyra his heir, not fathoming one day an actual male heir would be granted to him. He admits that he had a dream once about a male named Aegon, born to him, sitting upon the throne.

For an episode with so much to say about vision and prophecy, it should be remembered that on Robert Baratheon’s hunt in these same woods some 130 years later that he would be gored and eventually succumb to the wounds of a boar attack and that, as Targaryen descendants, his house was the sigil of the stag.

Rhaenyra kills the boar, brutalizing it, the same way Robert Baratheon would effectively vanquish the last of the Targaryens a hundred years later slaying Rhaegar on The Trident only to then be killed by a boar.

Viserys, on the hunt the next morning, does not encounter the fabled white stag, but instead murders a lesser stag, roped and held in place by his party. He stabs the animal with a Lannister spear. 130 years later, Robert Baratheon (of the stag) would be killed by Lannister deceit and conspiracy.

It is this circular nature of prophecy and revelation that seems so small but echoes the greater themes of a series so rife with both in George R.R. Martins novels.

Afterwards, Rhaenyra and Criston encounter Viserys’ original target, the white hart, who approaches them, signifying it is her that will reign with divine right.

Rhaenyra and Viserys, back at King’s Landing, finally have a conversation where he tells her that he doesn’t regret naming her heir, but forces outside his control might. And they are, we know. He also tells her to marry for love, whomever she chooses.

Of course the episode ends with a climactic battle at the Stepstones between Daemon and the Valeryon forces. Daemon slaughters the Crab Feeder in spectacular and gory fashion, but this huge battle seems so small in comparison to the quiet drama and development throughout the episode.

The floor seems poised for the dance to come, now.