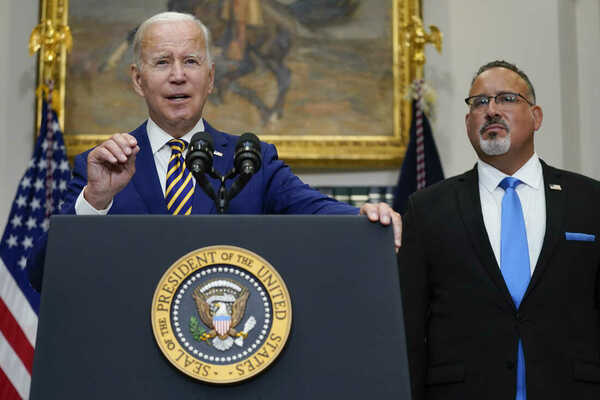 Not all college students have the same opinion about President Joe Biden’s executive order regarding student debt.

Some students say they support the president’s recently announced debt-relief measure and see it as a helpful way to reduce their sizable student loan amounts, while others see the costly measure as a way to pass a person’s debt on to taxpayers.

Their responses come in the wake of Biden’s nearly $300 billion initiative to forgive student debt for working and middle-class borrowers.

Bailee Allen, a Blackwell native, is a senior at the University of Oklahoma studying biology on a pre-med track. She said she supports the measure.

“I hope to see this set a precedent in ending the student debt crisis,” Allen said. “I would like to think that this is a small step to something much larger. I do not believe that the average person should have to go into debt that they will spend the rest of their lives paying off for a higher education. “Not only will I will personally receive debt relief from this order, but so will many of my peers. As someone who has many years of schooling ahead of them, this brings me peace of mind to know that I can further my education with less of a financial struggle.”

Dylan Siler, a recent student at Northwestern Oklahoma State University in Alva, said he is opposed to the debt relief program.

“I personally think the people who support this have debt and don’t want to be obligated to pay it back,” Siler said. “Do I think college costs too much? Yes. Do I think I should have to pay for someone else’s school? No. If you want to get your school paid for, there are way to: by working hard for it and not getting a handout.

“So many kids nowadays want everything handed to them [and] feel obligated for free stuff because of how the entire generation is, and it’s wrong. There’s no work ethic in the majority of young folk. I understand helping out the middle and lower class, but by trying to do that, you’re making it harder for them by forcing a debt that isn’t theirs, onto them.”

Rylee Johnson, who also studied at Northwestern, said she hopes the program will help young people in the long run.

“I think it’s great,” she said of the program. “It’s not easy to live on cur rent wages, so anything that can be taken off anyone’s budget [and] spending is a huge help. I don’t understand what people are mad about, honestly. I’m 22 and not eligible for Medicare until I’m 65, but I still pay taxes on it. It’s not a big deal, but I think it’s going to help a lot of people, and that’s all that matters.”

“American taxpayers will bear the brunt of others’ debts, fuel will be added to already raging inflation, and our nation will further fall into crushing debt. Worst of all, this decision is a slap in the face to Americans who have made sacrifices to pay off their debt, or who made difficult life choices to not have student loans in the first place. “First and foremost, the concept of debt canceling, or forgiveness, is simply inaccurate and misleading. There is no way to forgive debt. Someone must pay, and in this case, payment will fall to the American taxpayer. Forgiving student loan debt shifts the burden away from personal responsibility and onto the taxpayers at large, punishing them for the decisions of others.

According to the Penn-Warton Budget Model, this action will cost between $300 billion and $980 billion over the next ten years.

Additionally, this handout will benefit top earners and highly educated graduates the most.

Most of the debt is held by the top 60% of income distributions, and only 13% of adults in America have student loans.

This giveaway overlooks the average American.”

Congressman Tom Cole wrote: “Not only is such action completely unfair to millions of Americans who do not have student loans or already paid them off, but it will also add hundreds of billions of dollars more to the national debt. This move will ultimately drive our country deeper into a recession in the days and months ahead and could permanently damage the American psyche for generations to come.

Clearly, the president’s continual pause on federal student loan payments during the pandemic, turned now to an outright bailout, disproportionately benefits a few at the expense of many.

Put in perspective, according to Biden’s plan, the 87 percent of Americans who do not have student loans will be on the hook for paying off the loans of the 13 percent who do.

This sets a dangerous precedent that will undoubtedly incentivize others to go into debt believing that their debts will also be forgiven at some future date.”