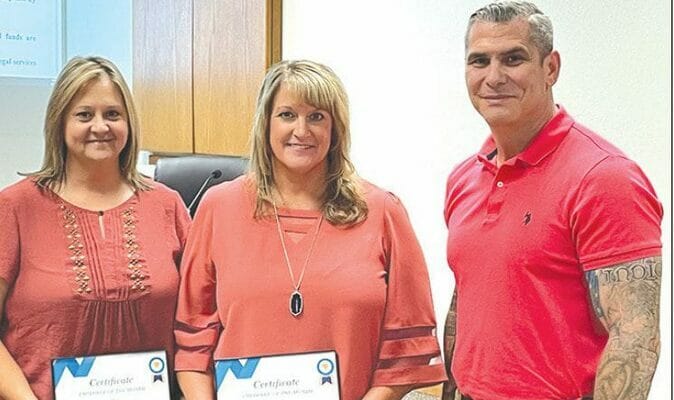 The Blackwell City Council met Thursday night for a brief meeting, and the night’s top honors for Employees of the Month went to Michelle Kincaid and Tobi Wood for their summer work at the Blackwell Memorial Pool.

The meeting began with City Manager Jerry Wieland bringing the two Blackwell Elementary School teachers up before the Council, praising their work in running the Memorial Pool during one of Oklahoma’s hottest summers.

Next, the Council heard from various department leaders, including Chief of Police Dewayne Wood, who updated the Council on a string of motor vehicle break-ins. “Jay Brewer, Nick Grove and Kyle Watters have worked exceptionally hard on getting a string of burglaries resolved,” Wood said.

“We had tremendous help from the community, who provided us with camera footage of the juveniles. They had been breaking into 10 to 12 cars over the course of a few nights, and it was an effort on behalf of our officers and the community to put an end to that. We’re very proud of how that was handled.”

Streets & Parks Department Director Chuck Anderson also spoke to the Council, providing an update on the continued paving work on the 100 blocks of Padon, Blackwell and Bridge avenues.

Anderson also added that the 13th Street project likely would be completed in the coming months. Anderson thanked Blackwell Public Power Manager Greg Sixkiller and the Blackwell electrical department for their help in putting the cover on the Memorial Pool to end the summer season, and he congratulated Wood and Kincaid for their honors that night.

Sixkiller, thanking Anderson also, reported to the Council that decorative lights were installed at the fairgrounds and arena in anticipation of the coming fair.

Moving onto the agenda items, the Council approved the surplus of old boots for the Blackwell Fire Department as well as hundreds of books at the Blackwell Public Library that had been removed from the system after a careful and extensive process.

The Council also approved a bequest to Crystal Renee Moore Hardman regarding the estate of Gerald L. Shumaker, permitting $25,000 to Hardman and retaining $105,752.88 to be used for a local match for an extensive sidewalk project. The short meeting ended before 7 p.m.