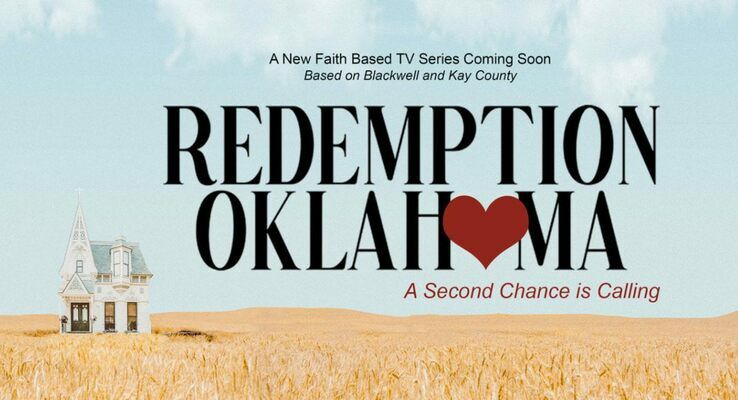 Kay County is the latest Oklahoma location to become a Hollywood hotspot over the summer.

The faith-based drama “Redemption” recently filmed at Bob’s Grill on Main Street in Blackwell and in Nardin, and the studio behind the project is now giving the public a chance to see the proof-of-concept project in its entirety as the drama is seeking out investors to become a full-fledged franchise. “Redemption, Oklahoma” will be shown free for the public Sept. 28 at the Blackwell High School Auditorium.

Doors will open at 7 p.m., and the showing will begin at 7:30 p.m. The screening will be followed by a Q&A and discussion with the project’s producers, including area-native Tray Goodman, owner and producer of Great Creative Minds Media, the company behind “Redemption, Oklahoma.”

“The [POC] is roughly 15 minutes as it stands now with credits, and we’re experimenting with different cuts of the project,” Goodman explained over the phone.

“We reached out to Blackwell Superintendent Shawn Haskins, who graciously let us use the auditorium. We basically said, ‘Hey, we want people to see this,’ and Shawn and I definitely agreed on how important that was not just to Blackwell, but to the surrounding communities.”

Blackwell is one of several stops for the “Redemption, Oklahoma” team, which will be showcasing the project in Ponca City and Broken Arrow and meeting with investors and others who are passionate about the project. Goodman will oversee the Q&A along with Executive Producer Paul Gebhard and Director of Photography Sam Erdmann. A proof-of-concept is, essentially, a loosely connected series of scenes and vignettes that establish the characters, setting, writing and tone of a proposed project.

It is shown to build enthusiasm among investors and studios. “Redemption” stars Nick Searcy (FX’s “Justified”) as a disenfranchised, alcoholic preacher in a small Oklahoma town, Redemption.

He finds his faith and his will to live again with the help of a single mother who finds her way into his life.

The proposed series has been pitched as something akin to “The Waltons,” “Twin Peaks” and “The Twilight Zone,” emphasizing the “anything-can-happen” potential of a small town that attracts a various cast of characters who are in need of saving.

Goodman explained that, with Oklahoma’s generous tax incentives, it is no wonder why the Sooner State has attracted high-profile talent.

“There has been a big ‘want’ in Hollywood for faith-based pictures – the tide has been growing for that kind of entertainment,” Goodman said. “And we didn’t chase that trend or set out to capitalize on that. That is the kind of project we’ve had our hearts set on for years, and it just so happens to be coming at the right time.”

Goodman has high hopes for “Redemption,” noting the overwhelming success of “The Chosen,” an ambitious “Game of Thrones”-esque retelling of Jesus Christ’s life. It is slated to run for seven seasons online.

“Our goal is for this to be a series, still,” Goodman said.

“In the world of binge-watching, people don’t pay attention to a movie as much as they do a series. Case in point: If I open a bag of M&Ms and pour them into a bowl, you won’t just have one, right? “A long-form series also allows us more longevity with storylines, characters, locations – everything, really. In a movie, 10 to 15 minutes in, you have your key players usually established, and there’s not a lot of surprises. With a series, we can open up with world a lot more.”

Goodman emphasized how crucial the local support for “Redemption” has been.

“Growing up around here, I know that one person can’t lift a car, so to speak,” Goodman said. “But several people can. And we had such fantastic support for this project. ‘Redemption’ simply would not have happened the way it did without the community behind it. [Melissa Hudson] at the Top of Oklahoma Museum letting us use their meeting space, [Joyce Courtney] at the Chamber of Commerce giving us space there, Cicarella Pizza staying open late for our crew to eat, the Nardin church, [Philip Scott] at Prairie Smoke BBQ on Main Street – everyone was so overwhelmingly supportive.”

After the filming wrapped up, the cast and crew put out a full list of thanks to people, including:

Faith-based films and TV have consistently been a special niche that major studios have been backing because of their relatively low cost versus their high returns.

Recently, high-profile films such as the Jordan Peele-produced “Honk for Jesus, Save Your Soul” – starring Regina Hall and Sterling K. Brown – as well as Mark Wahlberg’s “Father Stu” have gained notoriety.

Shia LeBouf is starring in a Catholic-based drama “Padre Pio,” which debuted at the Venice Film Festival to contemplative reviews for the embattled star, who converted to Catholicism and said the role “saved him.”

Those films all tackle various facets of faith, shying away from more traditional fare like “The Shack,” “War Room” and the “God’s Not Dead” franchise.

“Redemption” star Nick Searcy touched upon that subject in July when filming the project in Nardin:

“What has happened in Hollywood is that major studios now have divisions for ‘faith-based’ cinema, and when they call something that, it sort of unintentionally sends a message that ‘this is for Christians, no one else has to watch it,’” Searcy said.