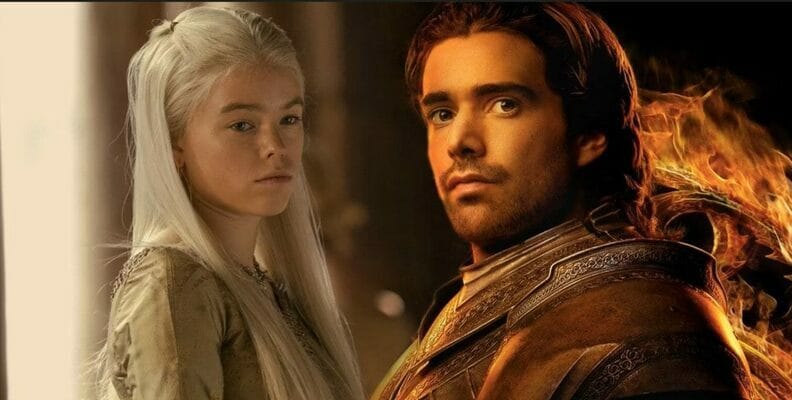 “What happened to your mother was a tragedy, but this is a tragic world. You cannot live your life in fear, or you will forsake the best parts of it.”

Another week, another fantastic episode of HBO’s “House of the Dragon”.

This week, let’s talk about sex. While “Game of Thrones” became known rather infamously for it’s focus on nudity and violence, HBO’s stellar prequel – now in it’s 4th episode – has attempted to subvert that very cleverly.

Prince Daemon Targaryen has returned from his battle with the Crab Feeder and has been christened as King of the Narrow Sea. In King’s Landing, Princess Rhaenyra Targaryen is growing bored and restless of her life as a caged bird, waiting to be sold off for an arranged marriage meant to strengthen the realm.

This scene is intercut with Alicent Hightower, King Viserys’ wife, being invited to her king-husband’s bed for what we see is very passionless lovemaking. He is drunk, and she has been drinking all night as well to perhaps numb herself to her queen “duties”.

This harkens back to the first episode, where Rhaenyra’s mother tells her that, simply put, women are put in the castle to breed offsprings and continue the work of the realm.

“Our battlefield is the bedchamber,” she tells Rhaenyra.

Back at the brothel, Daemon stops, perhaps realizing that this is wrong, and abandons her. Worked up and enraged, Rhaenyra returns to her room in the castle and invites her bodyguard, Ser Criston Cole of the King’s Guard into her room.

Criston is a man of honor, and it is very obvious by his body language and behavior that he interprets this act of lust as an impassioned embrace of love.

Last week, Criston followed Rhaenyra into the woods after an argument with her father where the two flirted and, seemingly, developed strong feelings for eachother.

Of course King Viserys hears of Daemon attempting to seduce Rhaenyra in the brothel and draws his dagger on his brother, expelling him from the kingdom again for deflowering his daughter and potentially ruining her prospects as a betrothal because she is no longer a virgin.

Rhaenyra tells Allicent, when questioned, that Daemon didn’t have sex with her. She isn’t technically lying, but the damage has been done and Viserys tells her she will be wed to Laenor Valeryon, The Sea Snake’s son, in an effort to mend House Targaryen and House Valeryon’s relationship and to great a great prospect for the realm.

In her chambers, Rhaenyra is presented with a special elixir by a master to “remove any unwanted consequences” from her alleged tryst with Daemon. Otto Hightower, the Hand of the King, who told Viserys of Rhaenyra and Daemon’s affair in the brothel, is also excommunicated as hand and banished.

Viserys feels Otto has been playing his own game by rising to power and strategically placing his daughter, Alicent, in the king’s grieving arms after the death of his wife many years ago.

It is a credit to actor Rhys Ifans, who plays Otto, that we actually feel a pang of sympathy for the man. He was essentially always trying to do the right thing, in his own way.

Otto cares for Viserys, and has seemingly only ever acted in the best interest of House Targaryen. The weaponization of sex this episode was exceedingly clever and well done, and it is a credit to director Claire Kilner’s feminine guide that we got a fairly objective view of the detriment that seduction can bring.

In George R.R. Martin’s “Fire & Blood” novel, which the series is based on, Criston Cole’s resentment of Rhaenyra is never expanded on past an allegation that either she rejected his advancements or he rejected hers.

By showing us that Rhaenyra seduced the man, leading him to break his vows, and then effectively abandoning him as a night of fun entertainment and nothing more, it leads to his eventual hatred of her and gives that relationship a tragic new weight.

There were no grand battles or any effects-driven action pieces here.

The weapon was the human body, and the form of combat here was sex.

It was fantastic and really shows how great “House of the Dragon” is truly capable of being.