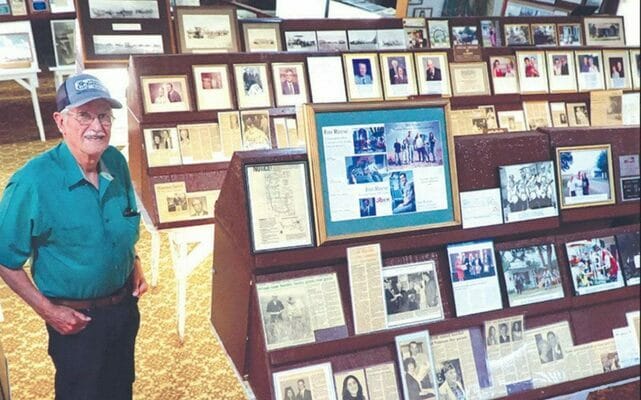 When you’re a kid, your parents tell you to act your age. But while that advice may be well-intentioned during your youth, it’s the worst advice you could follow later on.

In the last few weeks, I’ve gotten to spend some quality time with people who are still going strong well into their 90s. They’re all still active, still happy and still loving life. Meeting anyone over the age of 90 is not just a joy, but a privilege. When you look someone in the face who has spent nine decades or more on this earth, you’re looking at someone who has been through good times and bad – and persevered through them all.

They’ve seen the world change before their eyes, and they’ve held onto the truth through it all.

What’s most fascinating, however, is that most people 90 and older neither look nor act their age. Kay County resident Larry Crow is still as spry at the age of 92 as he was when he was 52. Or so it seems. If not, he’s a good actor.

Crow is the ringleader of the Friends of Nardin organization, which is dedicated to preserving the history of the small town in western Kay County. Each year, the organization hosts a widely attended celebration complete with a vintage vehicle parade, old-fashioned cooking, blacksmithing, cake walks and tractor pulls. It’s an impressive operation for a small but mighty group.

But if you get to know Crow, you’d understand why the celebration is such a success. Crow has dedicated his life to preserving Nardin’s history. He’s written a lengthy two-volume series on Nardin history, “Nardin, I Knew You When,” the result of years of in-depth research. He dug up hundreds of old photos, newspaper clippings and other print materials, not to mention all the people he likely interviewed.

He continues to be the town’s top promoter, too. He works hard each spring to get the word out – and drive participation up – in the town’s annual spring shindig. I can’t imagine all he does behind the scenes to make the Nardin Heritage Days so successful.

He spends hours setting up for the event, planning events during meetings with other volunteers and, later, cleaning everything up. I had no idea he was 92 when I first met him. He is active and joyful, and he’s always got something positive to say. Nardin, and the world as a whole, are better places because he’s there. I talked to Larry last week for a story about Les Layton, a major-league baseball player who hailed from Nardin.

If it weren’t for Larry, Layton’s life story never would have been preserved. Larry struck up a friendship with Layton and put his memorabilia on display in the town museum so he could give the town a claim to fame. Crow’s work is selfless. He embodies what makes Nardin, and Kay County, great: a giving heart, a cheerful spirit and a willingness to work hard to achieve a goal. Folks in nearby Sumner County, Kansas, have a similar role model.

Miss Thelma Donley, 96, was celebrated as South Haven’s oldest resident during the town’s fair earlier this month. She had her own float in the town parade, and she waved like a beauty queen to the men, women and children lined up along the highway to see her. We struck up a conversation while she was getting ready to listen to a band performing at the fair. If she had asked me to bet money on her age, I’d have lost. I underestimated her age by at least 15 years, and that wasn’t out of fear or courtesy.

She genuinely didn’t look or talk like she is 96. Thelma and her husband raised a family, and she spent several years working at the local library, helping spread the gifts of reading, wisdom and knowledge with children and adults alike. You could probably ask anyone in South Haven about her, and I’d wager they’d all have something good to say.

Now that, Folks, seems like a life lived well. Lately, I’ve been thinking a lot about the age-old question: What does it take to live a long, meaningful life?

Thanks to the inspiration these two people provided, I think I’ve gotten closer to finding the answer. Toby Keith released a song in 2019 called “Don’t Let the Old Man In.”

You can find the lyrics online, but the emphasis of the song is this: Don’t let old age steal your will to live out and enjoy an active life. They’ve probably never heard the song, but Larry Crow and Thelma Donley are just two of the many people who have heeded its advice.

When it comes to acting their age, they’re among the worst – and that makes their lives some of the best.