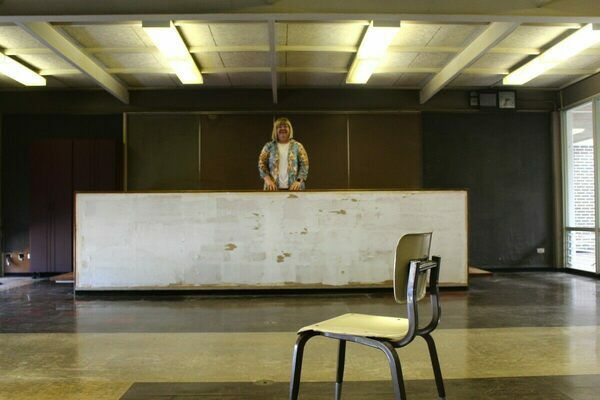 It was August 2007, the first time I stepped through the doors at Blackwell High School. In May 2011, I walked across the auditorium stage with my diploma in hand and 4 years of memories, heartbreak, laughter, education, and delinquency under my cap and tassel.

Since my time at the Blackwell Journal-Tribune in 2013, I have covered 9 years of graduations, proms, and homecomings. All tradition, all business as usual. I would also occasionally have to go to the school for various feature stories and other photos, and nothing had really changed.

The music changed, sure. But the people were the same. The kids were the same. The halls were the same. Teens flirting and laughing, getting into trouble, the football kids throwing up hand signs, the sports girls flocking together in their jerseys, the band and vocal kids singing and harmonizing, the art kids scurrying about with their supplies and satchels.

Now, in 2022, the music isn’t the only thing changing for the first time in Blackwell High School’s 70 year history.

Blackwell High stands on the precipice of transformation, thanks to Blackwell Public School’s ambitious renovation project that was passed by a bond vote last November which aims to modernize the school to create, among other things, a safer environment.

Lockers will be gutted, a new office will be installed, classrooms will be rebuilt, and the iconic library- a lowered core of the school and, in effect, a beating heart- will be redone as well.

Last Tuesday, when I was taking the front page photo of the Maroon Spirit and Miss BHS roster, I heard something that shook me in an unexpected way.

“We have to be sure and get the photo on the library stairs,” Michaeleen Paige said.

“This could be the last one.”

No one realizes how devastating change is until you’re face to face with it.

Just off the Study Center, Blackwell High School’s B wing is currently nearly-empty. Teachers who called it home are currently displaced, setting up temporary homes in the band and vocal halls, the auditorium, and even in small camps of dividers and curtains within the Study Center.

Soon, B wing will be unrecognizable. Demolished and rebuilt, like a maroon phoenix from the ashes of its 72-year-old body.

But now it just lays dormant, blocked off from the rest of the school by a clutter of tables, sealing in the ghosts of our youth now allowed to roam ceaselessly.

Lori Meador, a teacher I have known all my life from my years in her middle school English and literature classes as a student, her musicals as an actor, and then as her confidant and contact as a news reporter, showed me this crypt last week, a month before demolition is set to begin.

Meador has been a teacher in Blackwell since 1993, starting her career at BHS before moving over to Blackwell Middle School. She’s been back “home” at Blackwell High since 2011.

Opening the door to her B wing classroom, which has housed decades of English instructors, the only thing left in that desolate room were two works of art:

One, a mural of the Blackwell Maroon Spirit.

The other, the elegant cursive writing of Shakespeare’s Polonius in “Hamlet”:

“This above all: to thine own self be true, And it must follow, as the night the day, Thou canst not then be false to any man.”

“It was written over there,” Mrs. Meador pointed further along the wall where the words of the quote were faded and painted over, “then I moved it here to make way for the Smart Board. We tried to cover it up, obviously, but that wall just drank it in- it absorbed that paint.”

Lori ushered me along, shutting the door and letting a sigh escape her lips, barely above a whisper. I knew what she was thinking, that any time could be the last. One day she’ll shut it, and never open it again.

She pointed out the rooms where faded pictures and educational posters of pronouns, preambles, and peppy positivity once hung, revealing portions of the wall that probably haven’t been seen since the Reagan years or even before that.

In an old history classroom, she lifted ancient framed portraits of presidents past off their little nooks on the wall, taking them to her husband, a fellow teacher now set up in a makeshift classroom of curtains and dividers in the Study Center.

Desks sit vacantly. Some are out in the halls, others are still lined up in rows sitting before a teacher’s desk that is occupied now only by the stale, warm air.

Classrooms that were once echoing with laughter, hushed whispers, the lectures of teachers, the grinding of a pencil sharpener, lockers slamming shut, and the squeaking of fresh shoes on recently cleaned floors are now quietly derelict with the only noise reaching them belonging to the distant sound of life down in the rest of the school and occasional jangling of custodial keys.

I wasn't just walking with her as Lori guided me along, showing me the rooms.

I was walking with years of people.

Teachers and classmates. Some who are still around, and some who are no longer with us. I smelled the AXE spray, cologne, and perfume. I heard the bell and the chorus of chatter that came from kids squeezing past each other to get to escape from their classrooms. Teachers ushering along the traffic, using their small breaks between classes to talk to their fellow educators.

I remember, as many graduates probably do, staring out of those giant square windows into the hall, watching the occasional straggler pass by during class. Watching the rain fall out of the floor’s arched windows, trying to focus on anything but school work. How that hallway seem to stretch by a mile when called to the office. Taking trips to the B wing bathroom from A or C wing just to get an extra few minutes of roaming along.

Classes returning this year on September 30 will be eager, no doubt, to see the halls of their youth. Be it the 1960’s or the 2010’s. They will see themselves, far younger, and no doubt be filled with the swelling sentiment of nostalgia that always comes with the changing late-September winds that herald Homecoming.

In my time at BHS, B wing was home to some of my fondest memories.

At the end of the hall, near the doors that lead to the practice gym walkway, was a solitary classroom where the vines from one of B wing’s several planters had grown over its beds, hungry and left unchecked by the constant trampling of feet. They stretched out now, guiding me in.

This room once belong to the retired Coach John Cherry, a Blackwell staple much like Mrs. Meador and numerous others who touched more lives than he (or they) could probably ever know.

One warm 2009 day, I wore a t-shirt of the then-new comic book film “Kick Ass”. It was a red silhouette of the film’s titular character on a white shirt with the title boldly splattered across the bottom.

“You got a note here to go to the office,” Coach Cherry beckoned me to his desk before glancing at my shirt and adding with an unusually sly smile on his usually stony face:

“that’s probably what’s going to happen to you,” he joked.

I stood there in 2022, in front of the same desk he taught me from in 2009. The same layout, the same trashcan, the same wraparound chalkboards on the walls that became mostly obsolete long before either of us started there.

But I wasn’t standing in front of my class wracked by the fear (and rebellious delight) of a 16-year-old.

I was in an empty room at 29 saying goodbye to the same hallway and classrooms that Mrs. Meador was.

Whereas my farewell came from 4 years of fun, hers came from a collective 22 senior classes, 3 children of her own, and 21 musicals within those walls with 28 years total in Blackwell schools.

We both stood there with our memories.

Perhaps Coach Cherry was more right than he let on. The trip down B wing was a kick, all right.