"Sweat Equity": Hard work and care pays off in any economy 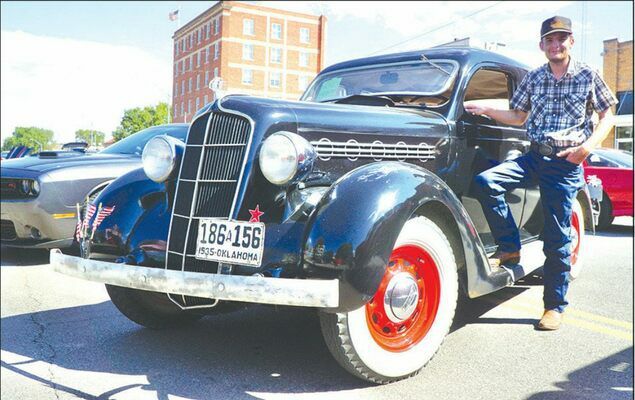 As inflation soars, the value of American currency and our worldly possessions has dropped. Investing in sweat equity, on the other hand, yields high dividends no matter what shape the economy is in.

This weekend, he drove his 1935 Plymouth PJ sedan to the Big Cruise and Car show in Alva, and it was a sight to see. The car’s slick black paint job glistened in the hot afternoon sun, and the chrome was polished well enough that you could see your reflection clearly. I should have checked my teeth for lettuce while I was looking at the front bumper, but that’s beside the point. While this Plymouth is eye candy now, it was once an eyesore.

After years of being kept in a dusty barn, the car was in rough shape when Jacob bought it in 2012. He estimates he’s put hundreds of hours into repainting it, working on the engine, stabilizing the frame and otherwise restoring the car to her former glory.

Now, however, Jacob is pretty close to having the car where he wants it. He’s got a ride that not only looks and runs well, but that also bears significance to him. Restoring that car is a big chapter in his life – because he chose to make it one. Have you ever set your heart to a project like that?

Maybe your project is more internal, if you will. Perhaps you’ve devoted significant amounts of time to cultivating a meaningful friendship, improving your marriage or finding a closer walk with God – all noble pursuits. We can choose in this life to spend our energy on a lot of things, whether they’re hobbies, careers or relationships. Everyone has different interests, and they make this world a beautiful, diverse place.

What really makes those things beautiful, though, is the effort we invest in setting our hands to the plow, metaphorically speaking. The level of care and passion we have for what we do – not necessarily the money we can throw around – is what makes something exceptional. Jacob could have paid a professional to restore the Plymouth to showroom quality (and make the project cost more).

But if the car had just rolled into a mechanic’s shop and rolled back out with a whole new look, what would he have gotten from that? He wouldn’t have had his tool-gripping hands all over the car, getting to personally examine the wear that came from thousands of miles of travel in rugged terrain.

He wouldn’t have learned about the workmanship those assembly line workers put into building the car so durably nearly 90 years ago.

And he wouldn’t have refined his own mechanical skills with the experience he got turning wrenches. Above all, he wouldn’t have spent countless long days and late nights taking the car apart and putting it back together piece by piece. And that’s what allows him to take pride in the project’s completion: He can honestly and truthfully say that he, with the help of some others, brought the car back to life.

Now that, my friends, is the greatest reward of them all.

To the dedicated worker, a project is more than a task; it’s a chapter in his life. And now that he’s got the car on the road again, Jacob will be able to create some stories of his own. In its younger days, the car’s owners drove it all the way to California and back, Jacob said. He hopes to take it that far when he puts the finishing touches on it. That trip will be a slow ride; the car tops out around 60 miles per hour. But it’s going to be a sweet ride. After all, he’s making it possible with lots of hard work and time. When you set your heart on a goal and see it come to life, it’s more valuable than it would be otherwise.

Achieving goals take money and help from others, but the key is putting in plenty of sweat equity. Even in a changing world, the value of hard work never will diminish, in spite of what people say – and it’ll always have a beautiful payoff. That Plymouth sold for a few thousand dollars when it was brand new. Nowadays, it might sell for a few thousand more. I have a hunch, though, that it will never have another owner. To the man who restored it, that old car is priceless.

That’s because he made the most valuable investment in it that he ever could: a whole lot of sweat equity