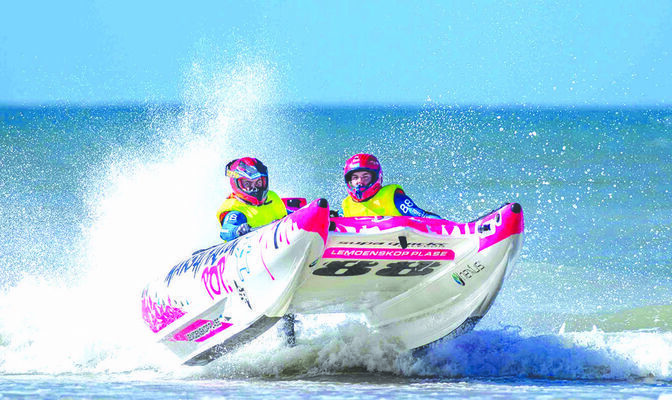 A 23-year-old farmhand has been driving bulky, dust-covered tractors through hot, dry fields in northern Kay County for the past seven months.

But in a few days, he’ll be racing a high-speed, bright pink inflatable boat through cold, shark-infested waters near the southernmost point of Africa.

J.D. van Niekerk, a native of South Africa, always wanted to come to the United States. That dream came true in March, when he flew to Oklahoma to work for Kay County farmer Jim Curl.

On Tuesday, after a summer of tilling up soil and caring for cattle, van Niekerk journeyed home to get ready for a world championship boat race.

For several days starting Oct. 2, his strength, skill and resilience will be put to the test.

“It’s going to be intense,” he said Sunday afternoon while sitting in a sun-lit office at Curl’s farm on 44th Street north of Blackwell. “I’m going to have one day of practicing, where the other guys started practicing months ago. I’m going to be out of shape, so the only thing I can bargain on is my physical fitness.

JOURNEY TO THE PROMISED LAND

Van Niekerk is one of thousands of South Africans who have come to the United States to work on farms as part of the federal government’s H2-A program for seasonal, foreign workers. But his roots with agriculture were planted back home.

Van Niekerk grew up raising sheep on his family’s farm near the small country town of Caledon, situated in Africa’s Western Cape about an hour away from the place where he’ll be racing.

After graduating from an agriculture-oriented high school, he obtained an agricultural degree from Stellenbosch University. Then, he signed up with a staffing agency to help him find farm work in the United States.

“This is my gap year just to get away, see some new places, meet new people,” he said.

The staffing agency earlier this year connected van Niekerk with Curl, who has farmed near Braman and Blackwell for decades. Van Niekerk’s resume was the last one Curl combed through early one morning, and Curl said he liked what he saw.

A phone call sealed the deal.

“He fit all the bills,” Curl said. “Having a degree in agronomy and working on a farm that’s twice as big as mine, I figured he knew what he was doing.”

Since van Niekerk arrived in March, he’s been harvesting wheat, baling hay, spraying fertilizer on crops and tackling other chores. He’s also taken time to tour the Land of the Free – specifically, West Coast destinations such as Beverly Hills, Malibu and Los Angeles.

He said he plans to return to the United States in the future to see the East Coast and, hopefully, Kay County to see friends.

“I met probably one or two guys that were not nice,” he said. “The rest, all of them were nice people.”

Before he plans any future trips back to the United States, though, he has to get back across the globe to race.

HEAD IN THE GAME

When the starting flag drops and boat propellers rev up, van Niekerk says he’ll have one thought in his mind: “Just hold on for life.”

From Oct. 2 to Oct. 8, van Niekerk and his father, Dreyer, will battle against fellow racers from around the globe during the Union Internationale Motonautique P750 Inflatable Powerboat World Championship. It will be the first time they’ve raced since the pandemic began.

High-speed boat racing has a following in South Africa. Van Niekerk estimates the nation has more than 100 powerboats, with each boat having a pilot and copilot.

The competition hasn’t always taken place in South Africa. This year, it just happened to be in the right place at the right time for van Niekerk’s family and others.

The championship is a three-circuit race divided into two classes: pro-stock boats, comprised of boats using high-grade stock engines and parts, and modified boats, which feature advanced engine parts and fuels, among other components.

Van Niekerk and his father will face at least a dozen other boats in the pro-stock class. Sponsored chiefly by Marshmallow Pop!, an up-and-coming South African beverage company known for its pink branding, the duo will race their 16.5-foot boat through two maze-like obstacle courses and one 140-kilometer (87-mile) race while battling wind, weather and waves soaring toward the sky.

There are no set speed limits. Only safety and the boat’s engine determine top speeds, Van Niekerk said.

The boating pair with the best overall score from the three circuits will win the class championship. Events will take place near Stuisbaai, which is entering the spring season. Water temperatures will hover around 50 degrees Fahrenheit.

Van Niekerk and his father have raced together for almost a decade, and his father has raced for much of his life. They’ve been in several competitions, including the world’s most intense high-speed boat race, the Aquila Safari Trans Agulhas Challenge in South Africa. They won the 2019 national championship, too.

As pilot, Dreyer will operate the engine and propellor. J.D. will be the boat’s copilot, sitting on the front of the boat to balance it on the water.

Balancing the boat entails more than maintaining an equal weight distribution. When the boat heads toward a wave, van Niekerk will have to decide whether he and his father can jump the wave before it breaks. If not, they have one choice: plow through it head-on.

The only way to do that is to “close your eyes and go for it,” van Niekerk said. “You have to get your timing spot-on. Otherwise, you can flip over, and that’s where the copilot needs to be on-point to balance the boat so you can land it.

“You actually go through the water. … That wave can wash you right off the boat. Just hold on, look back, because otherwise, the wave will hit you in the face.”

“We hit a lot of sharks and seals. A lot of them will get hit with the propellor, and birds will fly into you.”

Though van Niekerk hasn’t been on the water for some time, he’s tried to keep in shape by running with Curl’s son. A few weeks ago, he ran a 5K during the town fair in nearby South Haven, Kansas.

Those exercises could make the difference in whether he wins or swims, he said. With pressure mounting and time running out before the first day of the championship, van Niekerk said he’s a little stressed out. But once he gets in the boat, he’ll be focused.

Even though the championship will be strenuous, van Niekerk’s passion for boat racing only grows. That could be in spite of, or because of, the challenge.

“To be able to do it with my dad – I just love it,” van Niekerk said. “It’s just fun to get out there, feel free. It’s an adrenaline rush all the time.

“My best friends that I have are guys racing against me. I’ve known them my entire life. We all watch out for each other. We won’t put a first place in front of them.”

Videos of the race will be posted on various social media platforms at the end of each day, and some portions of the race may be televised. And while a live audience will be cheering on the competitors in South Africa, at least one of van Niekerk’s biggest fans will be keeping up with the competition from Oklahoma.

Van Niekerk is one of several South Africans who has worked for Curl through the years, and one of three to work for Curl this year. Curl keeps up with all of his foreign-born farmhands by adding them to a social media chat group, where he’ll be able to see photos of what they’re up to – like racing boats.

“He’s a very good worker. I hate to lose him,” Curl said. “These guys are No. 1 on being respectful. … They’re like my family.”