New restaurant coming to Blackwell: "It's not just about great food, it's about community." 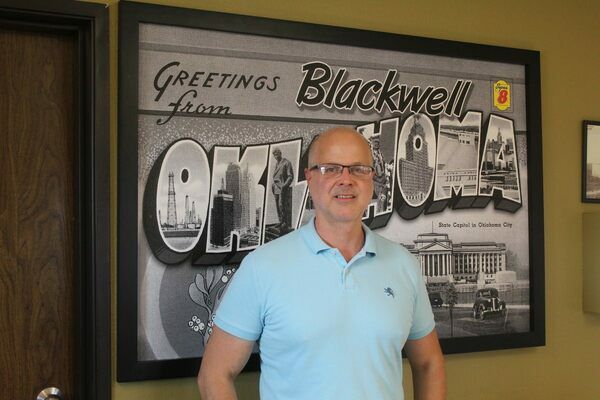 The Blackwell Area Chamber of Commerce’s 2022 Night Golf tournament was a weekend of fun and excitement for local golf enthusiasts and Blackwell businesses on Sept. 24, but the most exciting part seemed to be the unexpected revealing of a new local restaurant:

Limbaugh’s Great American Food & Spirits, coming soon on Doolin Avenue in the former location of The Stack. While the building may look vacant now, there’s plenty stirring inside those walls, just waiting to be seen.

When Limbaugh’s LLC brought Blackwell’s Super 8 Motel into its hotel lineup during the summer, Limbaugh said he saw potential.

“This is the first time we’ve ever acquired a hotel and retained 100% of the staff at a location,” Limbaugh said. “We couldn’t have had such a seamless time with the property here had it not been for Mitzi Graham, the Super 8 manager. She’s the first general manager we’ve ever kept on at a location. Some of the staff here bring over three decades of collective experience, and that has proven to be invaluable for us.”

With Super 8, the stars aligned for the new restaurant. The Stack was at the end of its lease, and the future was calling.

Limbaugh was quick to address The Stack and put to bed any negative rumors about the end of the longtime Blackwell eatery.

“He has been a longtime tenant, and we have been working closely with him, helping him to move and to close out the place. He chose not to extend his lease. It was amicable, very emotional, of course. There’s a lot of history there.”

The Stack opened in 1996 and was one of the first businesses in town to offer food-to-go during the 2020 pandemic. The building’s lobby will be redone, as will the reception area, children’s section, bathrooms and more, Limbaugh said.

It will get a facelift with new paint to match the Wyndham Hotel brand, along with heavy landscaping work to bring in a splash of color. “We’re in a central part of town,” Limbaugh said.

“I can’t think of a better place for the Super 8 motel and our upcoming restaurant. You have Walmart, the gym, the liquor store across the street, gas stations – this really is sort of the central hub of Blackwell. We’ll be featuring ‘meals-to-go’ so that you can run to the grocery store, maybe go grab a bottle of wine, pop in and grab a lasagna, desert, bread, all of that right here, go home, and your whole night is taken care of with no fuss or hassle.”

Location is just one of the special ingredients.

Great American Food & Spirits is hoping to bring a hybrid of sports-bar fun and down-home Americana under one roof, Limbaugh said. It will serve breakfast, lunch and dinner with a bar attached.

“It’s not a destination bar,” Limbaugh said. “It’s going to be a relaxed and casual place akin to a Chili’s or Applebee’s. You can come have dinner and a margarita or a glass of wine. On Saturdays, game days, people can congregate here, watch football, eat and have a stress-free time.

“We have restaurants where you can have drinks, but they might not offer a ‘bar’ where you can sit and watch sports or anything like that.”

Limbaugh said the profile for the guests of the Super 8 and the subsequent restaurant are working people and families – people who get up early, work hard and want to wind down in the afternoon with a beer and a steak. Limbaugh comes from a big family, and big families come with big meals, he said.

Big meals, of course, are crafted by time, love and a carefully honed sense of culture.

“The inspiration for the food we’re serving here is our aunt, from our family cookbook,” Limbaugh said. “I would say it’s ‘southern cooking’ – updated recipes of traditional southern fare. Updated comfort food, essentially.”

As he spoke emotionally about his family, Limbaugh said he is excited for his restaurant’s place in Blackwell’s heart, just as his love for his family’s food has a place in his heart.

Part of that is finding the right cooks and servers.

“It doesn’t matter how nice the place looks if the food isn’t worth it, you know?” he said.

“We are attracting some of the best culinary talent we can find – the kind of people that are limited by what they’re working with at, say, a casino or anywhere else. Here, we’re attracting talent and letting them thrive. “We’ve partnered with Northern Oklahoma College, talking about internships. Local institutions who want to give their students practical and hands-on scenarios. We will not open until our menu – our food – is perfect.”

Limbaugh’s restaurant will be focused on farm-to-table ingredients and will offer vegan and gluten-free options. “Our drinks won’t be just rum and Cokes, either,” he said. “We will have specialty drink options and really bring some fun flair to that aspect as well, of course. Tequila on taco Tuesdays, seasonal drinks – it’s going to be very exciting.”

“We’ll have a bakery as well. So, it’s a restaurant ... with a bakery and bar attached.”

“We’ll have a barista with sort of the best of the things you’d get at say Starbucks or Dunkin. You can sit here, use our guest wifi, have a coffee, maybe do some homework or some office work. I’m also a big fan of Waffle House. We don’t have anything like that here. We’ll have that. Smothered hash browns, you know? We’ll have specialties – trout, fish, Hispanic dishes. For kids, we have a kid’s charcuterie board, fun things like that. It’s all about family and giving families something to remember, something everyone will love.”

Great American Foods & Spirits won’t be open 24/7, but Limbaugh said it will “open early and close late” to accommodate Blackwell’s workers, something he thinks hasn’t been touched on before.

“You can only do a drive-through breakfast so many times a week,” he said. “Wouldn’t you rather have a plate of homemade biscuits and gravy? “We’re open on Sundays, too. We’ll be offering a brunch option for those that want to come in and grab a mimosa or a Bloody Mary.”

Limbaugh said Great American Foods & Spirits isn’t in competition with other local diners, but rather wants to achieve cooperation.

“I’ve been in talks with businesses in Blackwell, in Tonkawa,” he said. “We’re not in this to step on toes. The business owners I’ve talked to – Bob’s, Prairie Smoke, Mary’s in Tonkawa – we all came to agree that anything that encourages business in this district will pay off for anyone. There are some supply chains that have stopped coming here because it doesn’t make sense financially for them to provide goods. There’s not enough orders to justify it. Our collective goal is to change that completely. If one of us is winning, we all are. Blackwell is. “We’ll get better pricing. We’ll get more deliveries. This is a community effort. Everyone wins.”

The restaurant aims not only to feed families, but to host them as well. Limbaugh said there would be space rented out for baby showers, retirement parties, business meetings, Homecoming parties and other events. “Things are happening in Blackwell, things are moving, and we will be the space to be,” he said.

Another feature Limbaugh is excited about is a patio dining area.

“When the weather is nice, you can come have some drinks outside, have some fun, and enjoy our patio,” he said.

“We’re here for the community. “We’re here to enhance– not to disrupt – the quality of life here in Blackwell. We love Blackwell and want to see it succeed. We want to be involved in the churches, the organizations, the community as a whole. We want people staying in Blackwell to eat, to have fun.”