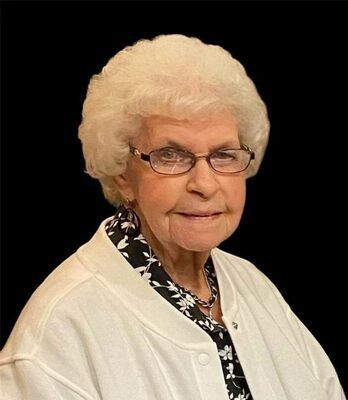 Naomi Ruth (Hollingsworth) Kahle of Ponca City, Oklahoma, passed away peacefully to be with her Lord and Savior at the Stillwater Medical Center in Blackwell on September 27, 2022, with her daughters by her side

Naomi Ruth Kahle was born on December 8, 1927, to Louie E. and Ruth (Lowry) Hollingsworth in Ashton, Kansas. She grew up in the Ashton and Gueda Springs, Kansas communities. She attended school in Ashton and graduated with the class of 1945 from Arkansas City, Kansas High School.

Naomi was introduced to Melvin Kahle by Melvin’s cousin. After a brief courtship, they were married June 8, 1947, in the Redeemer Lutheran Church in Arkansas City, Kansas. They lived on their farm East of Blackwell, Oklahoma for almost 66 years. After the loss of Melvin in 2013, Naomi continued to live on the farm. In 2021 she moved to Creekside Village in Ponca City, where she met a whole new community of friends. As an active member of St. John’s Lutheran Church, Naomi was a Sunday School teacher, member of the Ladies Aid and Missionary League. She was employed outside of the home as a secretary for several companies. She belonged to Beta Sigma Phi Sorority and was a charter member of American Business Women’s Association. Naomi was also employed by the Ponca City Public Schools as a paraprofessional, working with special needs students. After many years of service, she retired from PCPS only to return as a substitute teacher. Her love of children and teaching touched many lives in Ponca City.

Naomi’s talent for baking, cooking, and entertaining was beyond measure. The grandchildren and great-grandchildren were recipients of Grandma Moo’s culinary treats, as well as family and friends. It brought her great joy to host dinners, card parties, and holiday gatherings.

One of Naomi’s favorite hobbies was to babysit the grandchildren and great-grandchildren, who lovingly called her Grandma Moo. She also enjoyed playing cards and dominos, working puzzles, and in her earlier years, sewing and ceramics. Naomi never met a stranger, so visiting with others on the phone or in person was her lifeblood.

Naomi and Melvin enjoyed traveling throughout the United States, especially to visit relatives and friends. Their special trip to Hawaii revisited Schofield Barracks, where Melvin was stationed during WWII.

Naomi was preceded in death by her parents; her husband, Melvin; an infant son, Melvin Leroy; a sister, Mary Lou Smith and her husband, Roy; and a brother, Forrest.

Services will be held at 1:00 p.m. on Monday, October 3, 2022, at St. John’s Lutheran Church, East of Blackwell. Burial will follow in Resthaven-Sunset Memorial Park in Ponca City, Oklahoma.

In lieu of flowers, Naomi wished that memorial gifts be given to her beloved church of 75 years, St. John’s Lutheran Church.

After 30 years, this historic Deer Creek shop i...